The live poker scene is back in full swing with operators and players altogether, celebrating the smashing success of recently concluded festivals. While the summer games have just wrapped up, tournament runners can now set their eyes on the upcoming 2022 World Poker Tour World Championship happening this December. The series is geared to play through December 1 – 20, 2022 at the famed Wynn Las Vegas for three full weeks of thrilling action.

The prestigious WPT festival boasts a 23-event lineup, covering over $22 million in combined prize guarantees. A selection of poker variants including H.O.R.S.E., Omaha 8-or-Better, and an 8-Game Mix tournament complete the schedule in addition to the series’ twelve newly added No Limit Hold’em events. The largest prize pool of course, still falls down to the multi-day WPT World Championship kicking off on December 12, which holds a whopping $15 million guarantee. Buy-ins for the events range from $600 to its highest $10,400 for the esteemed World Championship that is sure to attract its share of serious players.

“Our goal is to develop the WPT World Championship into one of the most talked about poker events of the year,” said Adam Pliska, WPT CEO. “Partnering with Wynn Las Vegas has allowed us to put the player experience first and the festival schedule reflects that.”

Among the highlights are two more multi-day events donning seven-figure guarantees set to run before and after the Main Event games. Both the WPT Prime Championship and Mystery Bounty event post more affordable entry fees amounting to $1,100 and $1,600 respectively for those looking for less expensive yet equally notable action. Also, making its debut is the inaugural WPT Ladies Championship with a buy-in of $1,100 and a $200,000 guarantee, allowing female players to bask in their own limelight.

Throughout the festival’s 21-day schedule, players will have the chance to get into these highlighted tournaments for a fraction of the price. A total of 220 seats is offered across its number of satellites with the biggest one occurring on December 11th, listed to award a minimum of 50 seats to the $10,400 WPT World Championship.

“We are proud of the reputation Wynn Las Vegas has for running world-class events,” said Ryan Beauregard, Executive Director of Poker Operations at Wynn Las Vegas. “In partnership with WPT, the upcoming World Championship will be no different and solidify our spot as a major poker destination.” 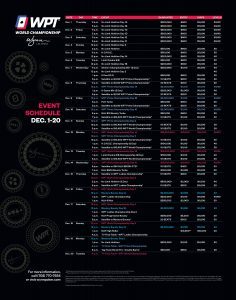