The guarantee smashing WPC-SEAPT Kick Off Event at Grand Loyal Poker Club has finally come to a close after awarding close to VN₫ 4.7B in prizes across the three days. With 75 players returning to the felt out of the record 605-entry turnout, it took about 9 hours of fierce gameplay before the final table was set. Among those who fell a few places short of the final 8 are Final Day chip leader Nguyen Duc Anh, up and coming Ha Van Thien, notable Korean player Hwang Seong Il, and bubble boy Kyle Bao Diep.

Vietnam’s Nguyen Van Trung led the final pack of 8 with the seven other contenders not far behind. It took nearly an hour before the first busts were seen with Ngat Nguyen on the fortunate side of things. In a three-way all-in, Nhat had the best of it with premium

, eliminating both players simultaneously. This began Nhat’s rise to the top all the way to the end. Opponent Nguyen Doan Trung Hieu on the other hand, also had his fair share of spots having delivered two eliminations – Ta Son Tung (6th) and Trent Fechter (5th), both with pocket Queens. Nguyen Phuong Ngoc valuably scooped up several small pots with his aggression always keeping him in the middle of the action throughout the final table.

With stacks shared among the three Viets fairly even by four-handed play, the three eventually cut a deal after short stacked Choi Hye Jin headed for the rails. Local Nguyen Phuong Ngoc cut the biggest piece from the deal, bagging VN₫ 662,122,280 (~US$ 27,976) in winnings to end the day. The three then flipped for the trophy with Nguyen Phuong Ngoc again, successfully landing the trophy. 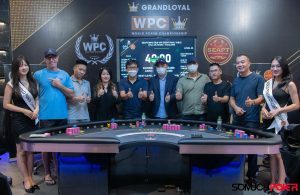 *Denotes deal was made

Visit our live updates page for full payouts and more details on what went down on the Final Day. 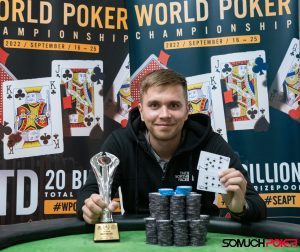 With how the first few days turned out, there’s no surprise to seeing another of the festival’s guaranteed games easily pass its listed guarantee. The VN₫ 1.5B GTD High Roller event drew in a smaller field of 53 entries to almost double its guarantee. The additional VN₫ 1B added to the prize pool saw 7 contenders receiving a minimum payout of VN₫ 116M. Bubble to the money didn’t take long as Estonia’s Roland Kivi instantly crippled India’s Gaurav Sood in one hand. Having opened on Sood’s big blind, Sood moved his big stack all-in, allowing Kivi to quickly make the call with

and Kivi took down the massive pot, crippling his opponent down to 3.5 big blinds and shortly eliminating him one spot short of the payout. 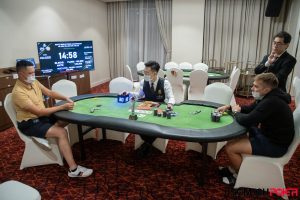 From then on, stacks swung with no hesitation as previous High Roller runner-up finisher Teddy Pham caught on to the chip leader ultra-fast. The shortest stacked Pham kicked things off by scooping up a three-way all-in with

. His roll continued on as he doubled up followingly after off the chip leader, and eventually headed into heads up play against Kivi. In the end, Kivi with a 6:1 chip advantage, closely sealed the deal as he crippled his opponent with a flopped full house. Kivi barreled through to the river with Pham throwing his cards in the muck as Kivi revealed the boat. Pham exited shortly and was left to settle for another runner-up finish, yet undeniably well still in the green.

With the Kick Off Final Day running alongside the Super Stack, many eliminated players grabbed the chance to jump in the VN₫ 500M guaranteed tournament for another chance at a trophy. France’s Aladin Raskallah for one, busted 65th in the Kick Off games and proceeded to dominate the Super Stack event consistently. From the last three tables, Raskallah held the lead all through to the final four where Nguyen Thanh Hung caught a massive pot to turn the tables. Nguyen Thanh Hung was then unstoppable, moving all-in every hand to eventually bust short stacked Nguyen Son Lam. 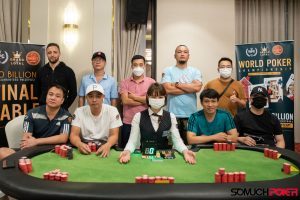 By heads up play, Nguyen Thanh Hung’s aggression slowed down after Raskallah doubled off of his opponent. The middle piled on a flop of

. The lead then shifted back and forth between the two with Nguyen Thanh Hung rolling a three time double up to finally clinch the victory and capture the VN₫ 268,100,000 (~US$ 11,328) top prize.

Stay tuned to Somuchpoker for more on the ongoing World Poker Championship at Grand Loyal.

Cards are in the air for this season’s World Poker Championship at Grand Loyal, Hanoi!

World Poker Championship smashes VN₫ 2.5B Kick Off guarantee halfway through Day 1B; One more flight to go!