The halfway mark for the World Poker Championship games at Grand Loyal Poker Club, Hanoi was a very busy day altogether with three featured events playing down to the winners. One of the main highlights of the festival, the multi-day Mystery Bounty event drew to a close as its 75 final qualifiers left France’s Souksamlane Frederic as the last man standing. Aside from the three concluded events, the crown jeweled Main Event’s first qualifier also played through with two more left on schedule for tomorrow, September 22nd. 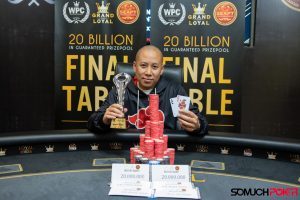 The festival’s unique Mystery Bounty event saw a total of 394 runners gunning for a chance of the trophy with the massive turnout bumping the prize pool up by 2.5x its guarantee. 50 bounty tickets including two VN₫ 230M bounties included in the pot didn’t do anything other than drive the excitement through the roof. Within the first level of the Final Day, player after player tried their luck in claiming the largest bounty until local Kyle Bao Diep drew the biggest one and left the rest patiently waiting until the final table for the next one.

The final table closed in after Vietnam’s Ha Ngoc Thao exited in 9th with Pham Bao carrying a significant lead and the most number of collected bounties to start the final gameplay. Within the first 40 minutes, two knockouts were already seen with short-stacked Pham Quang Van being the first casualty, and Russia’s Ruslan Belinski closely behind after losing a crucial flip against Le Hoai Nam. From this bust, Le collected the last VN₫ 230M bounty after sadly drawing three VN₫ 5M tickets earlier in the day.

Chip leader Pham Bao then delivered the next three bust outs about two hours later, sending international opponents Benjamin Sai (6th), Hwang Seong Il (5th), and Jonas Magdalinski (4th) to the rails followingly. While Pham dominated the other players, the aggressive local couldn’t get through the formidable and big stacked Souksamlane Frederic. The latter kept his lead and held onto it by making smart calls and avoiding mistakes throughout the end game. Pham eventually bowed out in third after a failed bluff through the river against Frederic, giving his opponent a 6:1 lead into heads up play. Frederic took it to the end and clinched the trophy after defeating Le for a total of VN₫ 647,800,000 (~US$ 27,339) in prizes including bounties.

Visit our live updates page for full payouts and more details on what went down on the Final Day.

The heftiest buy-in on schedule saw tournament superstars from all across the region and the local scene’s top tier players vying for its top prize. Among those were Singapore’s Alex Lee, Vietnam’s Dao Minh Phu, Korea’s Gab Yong Kim, and India’s Kartik Ved who all unfortunately fell short of the money. APT champion Pham Tien Dung was also amongst the mix but inevitably bowed out just two spots short of the minimum payout.

Once the final six was set, Vietnamese runners dominated the table with only Shardul Parthasarathi as the only international player left in the running. After he exited in 6th, Nguyen Vu Ha followed shortly behind with Nguyen Duc Anh delivering his elimination. Vu Ha played a massive bluff with

on a board of

, giving his opponent the lead heading into the final four. It wasn’t until two-time High Roller runner up Teddy Pham paid off Ta Son Tung’s rivered flush did the gameplay ultimately change. 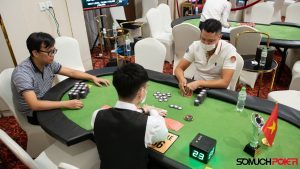 Now with the lead, Ta carried on to knock out second in chips Duc Anh following a massive flip to score an even bigger advantage against Pham and short-stacked Nguyen Quang Huy. From then on, Ta’s aggression pressed even moreso as he headed into heads up play against Pham with a 3:1 stack. Pham again chasing the trophy, eventually got close to catching up to Ta before a crucial race officially sent him to the rails one spot short of the top for a third time. The final hand saw Ta’s

in an all-preflop situation to clinch the victory and a massive VN₫ 1.5B in winnings. The last event to cap the day was the 119-entry field Superstack Turbo where it took over eight hours before the final table was set. The last two tables saw hyper aggressive and then chip leader, Lee Chang Hwan deliver the bubble with a straight

on a board of

and flopping a four. His run however, didn’t last through the end as table chip leader Min Yu Jung eliminated several players to remain in the top spot. After forty minutes of play, the tournament wrapped up with Min as the champion, giving Korea its coveted first WPC trophy win.

Stay tuned to Somuchpoker for more on the ongoing World Poker Championship at Grand Loyal.

Cards are in the air for this season’s World Poker Championship at Grand Loyal, Hanoi!

World Poker Championship smashes VN₫ 2.5B Kick Off guarantee halfway through Day 1B; One more flight to go!