DraftKings posted a fun prop bet on whether or not the New York Knicks advance to the playoffs next season, where “yes” plays out +155 odds and “no” is the favorite at -195. The future of the Knicks — including the 2023 playoffs — hinges upon whether or not general manager Leon Rose can work out a trade for Donovan ‘Spida’ Mitchell from the Utah Jazz. 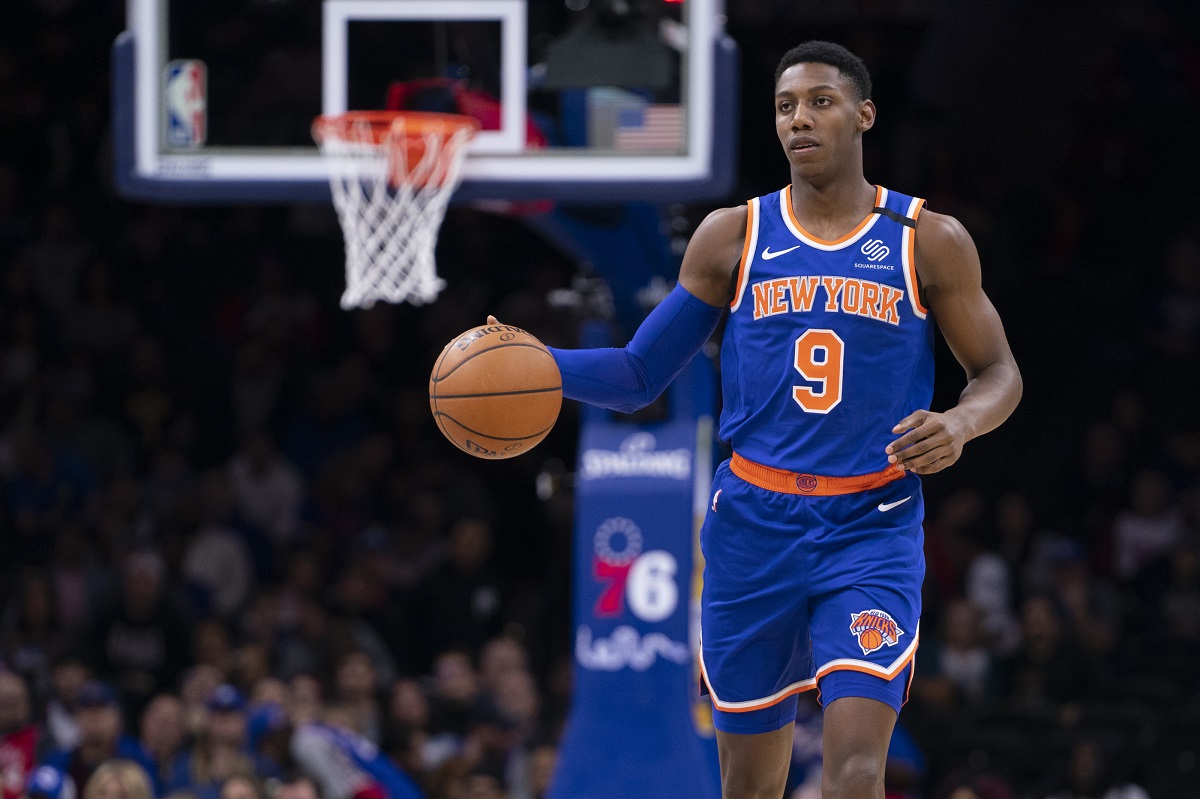 RJ Barrett from the New York Knicks brings the ball up the court at Wells Fargo Center in Philadelphia. (Image: Mitchell Leff/Getty)

In the last 21 years, the Knicks qualified for the playoffs just six times including two seasons ago. They won one playoff series back in 2013, but have just one appearance in the last nine season.

The Knicks failed to qualify for the play-in tournament just one season after they finished fourth in the Eastern Conference and secured the #4 seed in the 2021 NBA Playoffs.

PROP BET: WILL THE KNICKS MAKE THE PLAYOFFS?

Oddsmakers posted win totals recently and the Knicks were installed at 39.5 o/u out of 82 games. The bookies do not think the Knicks can break even and finish above .500.

The Knicks were in the playoffs first 14 straight seasons between 1988 and 2001. Spike Lee is set to direct a docu-series on the 1990s Knicks, or the golden era for fans when the Knicks were actually relevant and went to the NBA Finals in 1994 and 1999.

James Dolan ruined the Knicks ever since his billionaire father let him run the show. The franchise ha been jinxed ever since they traded Patrick Ewing to the Seattle Sonics in 2000. Head coach Jeff Van Gundy abruptly quit before the start of the 2001-02 season after his best friend died in the 9/11 terrorist attack at the World Trade Center. Since then, the Knicks made it to the post season just six times. They had a mini-resurgence between 2012 and 2014 under Mike Woodson, and even won a series in 2013 with Carmelo Anthony, but it’s been all downhill since then.

Under Dolan, the Knicks have become the biggest joke franchise in the NBA even though it’s considered one of the richest according to Forbes and valued over $5 billion. Fans hate Dolan, former players loathe him — especially Charles Oakley — and top-end free agents refuse to sign with the Knicks due to Dolan’s reputation of being a jagoff. The Knicks tried to entice LeBron James to sign with them in 2010 and even employed James Gandolfini from “The Sopranos” to make a pitch video to bring LeBron to the Big Apple. However, Dolan botched the meeting and LeBron said he would never sign with the Knicks.

Kevin Durant and Kyrie Irving were rumored to join the Knicks a few seasons ago, but they signed with the Brooklyn Nets instead.

The Knicks and Utah Jazz discussed a trade for Mitchell, but the current price tag is too high. The Knicks stockpiled picks for the chance to acquire Mitchell, and they offered four first-rounders and a couple of players. Danny Ainge from the Jazz rejected the offer and asked for six first-round picks plus three young up-and-coming players like Obi Toppin, Immanuel Quickley, and Quentin Grimes.

The Knicks and Jazz have backed off on trade talks, but other teams called Ainge about Mitchell including the Miami Heat.

If the Knicks add Mitchell, then you should consider the playoffs prop bet and hitting the over on win totals. The Knicks might not win a playoff series, but at least they’ll make the postseason with a backcourt consisting of Mitchell and newly-added free agent Jalen Brunson. For the first time in two decades, the Knicks have a legit point guard with Brunson.

However, could the Knicks make the playoffs with the current roster? It will be tough because Julius Randle had an awful season last year and struggled with his shooting. Late in the season, Randle developed an adversarial relationship with the crowd at MSG. As soon as things start going sideways next season, the boo birds will blast Randle and things can get worse from there.