After trade talks for Kevin Durant died down last week, the Boston Celtics are the latest team to inquire about a deal with the Brooklyn Nets. The Durant trade rumor sent ripples through the NBA futures market, and the Celtics are the consensus favorite to win the 2023 NBA championship at +450 odds. 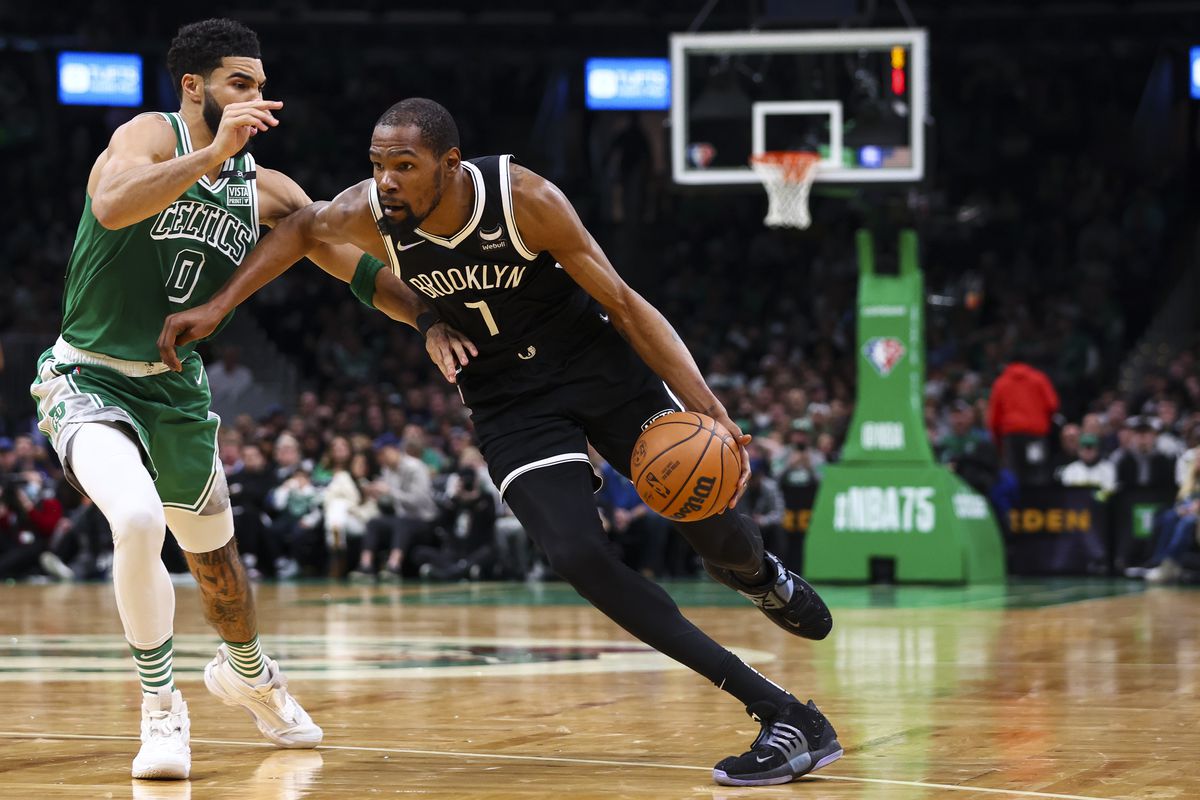 Kevin Durant from the Brooklyn Nets is defended by Jayson Tatum of the Boston Celtics in the 2022 NBA Playoffs, but the two could become teammates next season. (Image: Getty)

Durant requested a trade from the Nets a couple of weeks ago and numerous teams have been jockeying for position to secure one of the NBA’s premier players. Adding Durant to a team instantly makes them a championship contender. Durant hinted that he’d like to chase a championship, which is why he asked the Nets to consider a trade with the Phoenix Suns or Miami Heat. Both teams saw an uptick in their 2023 NBA championship futures when the Durant trade talk first hit the airwaves.

The Nets are in no rush to trade Durant, especially while they field calls for Kyrie Irving. There’s a rumor out of Brooklyn that Durant really doesn’t want to leave the Nets, but rather, he prefers to no longer play with Irving. It’s a passive-aggressive ploy for sure, but the NBA has always been a playground for mind games. The Nets would love to trade Irving, but very few teams are interested in overpaying for a mercurial player in the final year of his contract.

Durant: Suns and Heat Cool Down

The Suns and Nets trade talks were put on the back burner when the Suns were in the middle of negotiating a contract extension for Deandre Ayton. Ayton — the former #1 pick in the draft — almost went to the Indiana Pacers after they signed a free agent offer sheet. The Suns matched the sheet and Ayton remained with the Suns.

At the same time, the Nets said they were not interested in Ayton, but adding Durant would require the Suns to gut their team of key starters (Jae Crowder, Mikal Bridges) and role players (Cam Johnson). Durant to the Suns rumors simmered down, while rumors about the Miami Heat and Toronto Raptors gained traction.

The Raptors are in the best position to add Durant in a trade because they have the perfect combination of young players and draft picks to offer the Nets.

The Heat have to jump through several hoops to acquire Durant, and one of them requires the Nets to trade Ben Simmons if they wanted Bam Adebayo as the centerpiece of a Heat trade. There’s an obscure NBA rule where a team cannot add another player in a trade under a max-rookie contract (Adebayo) if there’s already a max-rookie contract player on the team (Simmons). The Nets are not really interested in any trade packages that do not involve Adebayo, so they’d have to deal Simmons somewhere. Yet, the market for Simmons is very low after he missed all of last season due to mental health reasons and a back injury.

The Celtics boasted the top defense in the NBA last season, which is one of the reasons why they swept the Nets in the first-round of the playoffs. The Celtics won the Eastern Conference title and knocked out the defending champion Milwaukee Bucks in the conference semifinals. They earned a trip to the 2022 NBA Finals, but lost to the Golden State Warriors. Despite the runner-up finish, it was impressive season for the Celtics under rookie head coach Ime Udoka.

With championship dreams on their minds, adding Durant in a trade will thrust the Celtics over the top. General manager Brad Stevens has three draft picks at his disposal that he could package together with Jaylen Brown and a couple of role players to acquire Durant in a trade. Apparently, Jayson Tatum is untouchable, but the rest of the Celtics are available if the Nets want them.

Brown is an All-Star who is only 25-years old with two more years remaining on his current contract. He’s scheduled to earn $26.7 million this upcoming season, and $28.5 million next season.

The Celtics bolstered their bench by adding Malcolm Brogdon in a trade. At face value, Brogdon would come off the bench as the Sixth Man. Brogdon also provides the Celtics with a back-up plan if they pursue Durant in a trade. If they part ways with Brown or Marcus Smart, Brogdon could slide into the starting lineup.

A frontline with Durant and Tatum is making Celtics fans lose their collective minds. Meanwhile, bettors are hammering the Celtics to win the 2023 NBA title with their odds moving from +550 to +450 based on the latest Durant trade talk with the Nets.