What Is Small Ball Poker?

Small Ball Poker Strategy includes playing a wider range of starting hands and playing a lot more pots more aggressively, but only using small bets and small raises. It saves lots of chips and protects you from losing an excessive amount of money when certain plays do not work out.

You’re using smaller bets for two reasons. One, these bets don’t balloon the pot, which allows you to outplay your opponents more often. You are reducing variance and increasing the skill factor. Two, by playing more pots and appearing to be very aggressive, you will get more calls when you have a hand.

“Small Ball Poker” is an innovative style of play that offers an extremely nice range of starting hands and appears to be aggressive but is actually played more cautiously and helps protect your stack at all times. The players base the small ball poker strategy on small raises, small bets and an occasional check to prevent losing a lot of money when they must fold. The small ball strategy is best during the beginning or early stages of multi-table poker tournaments prior to large blinds and the comparison of chip stacks.

The Basics of Small Ball Poker 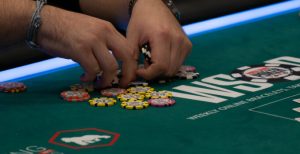 I find the key concept of getting in a playable hand cheaply without my opponents suspecting what hand I might hold. This generally means making my hand with a one-gap hand, two-gap, connectors or small pairs. Sometimes, I get lucky because my opponent has a big pair and I can take his entire stack, if they are the aggressive type. I can bluff when the board is a little off without supporting anything and I have a good hand. When the board is benign, my savvy opponents who notice the hands I play will credit me with a big hand.

It’s always good if you can play this type of hand inexpensively. Just know your poker career will not last very long if you continually play gapped hands, small connectors and small pairs in raised pots from an early position when you may face a raise.

The key to small ball poker is limiting what you may lose on a hand and controlling the pot size. If I experience more flops than most of my opponents, I can minimize my investment by keeping the pot small. You can also control the pot when you are ahead or behind by checking on the betting rounds. No good poker player will raise with a poker hand such as 7-5 to flop. These are poker rules for experienced players.

I engage in more hands than an average opponent playing by the book. Opening for a raise when my hand appears weak makes them believe I am loose and aggressive. My opponents will call more often with weaker hands and I can exploit them when my hand is strong.

Some opponents will perceive me as aggressive and weak, others will stay out of my way because they think I am lucky. I must never bluff against the former. If my opponent thinks I make every hand, they will move aside when I bet. Now I can steal.

The Source of the Money

I can win money from opponents calling with a weak hand. They will not read my hand as strong. This is the opposite of a poker strategy playing just good cards to bet big enough to drive away my opponents when they are holding a top pair with a draw or a top pair with a top kicker. If my opponent calls with good but not exceptional hands, I can take the majority of their chips when I hit an improbable hand.

Image is Nearly Everything

Table image for small ball poker is critical for success. My image must appear loose for my opponents to call with a weaker hand than mine. My small raises and bets earlier set me up for bigger hands later.

If my opponents are brain dead, my loose and weak image will be irrelevant since they will not tune in to my message. If my opponents are actually as loose as my projected image, they will call with nearly anything. I may be better off playing aggressive and tight poker as opposed to small ball.

Playing After the Flop

In the case of small ball poker tactics for Texas Hold’em, it becomes critical to play my best after a flop. This is the only way small ball poker will work when I am experiencing numerous flops. When small ball poker is not working, I can resort to power poker. I can end confrontations with aggressive playing prior to the flop.

Small ball poker also offers opportunities for reading my opponent. Instead of facing a large re-raise covering the majority of my chips after placing a big bet, I can gain more betting rounds by making smaller bets. This enables me to assess the potential poker hand of my opponent according to his actions prior to the flop, on the turn or on the flop.

One of the best benefits of small ball is the ability to deconstruct the play of my opponent without losing all my chips. I know my opponent has the same opportunity. By playing at my best after the flop, small ball poker gives me an enormous edge over any opponents not as adept at playing after the flop. I can take the opportunity to read their hands during several betting rounds.

Even though the image I convey with small ball poker is looser and more hands are played than by my opponent, my starting hand selection is an important poker strategy. When I plan to raise holding a dicey hand, my hand must have potential. This is impossible with a trash hand.

Growth potential is important since raises in small ball are smaller and often called. This is when suited cards, one-gapped hands, connectors and small pocket pairs come into play.

I am always hoping for a big hand I can crush my opponent with. Remember this works both ways. I must release my hand if I only catch a portion of the flop when it looks like I have been beaten. I am more likely to be beaten when playing small ball than power poker. If I flop a top pair in small ball, chances are good my kicker will be lousy. If I flop the top pair in power poker, I will probably have the top kicker.

Managing the pot size is important because if my opponents can easily dominate my hand, I do not want to lose a lot of money. Folding is probably my best option. If folding will not work, I can still avoid losing a lot of my hard won chips by keeping the pot small.

The Best Time to Use Small Ball Poker Tactics

Small ball poker is more effectively used during the start of poker tournaments and when there are smaller blinds in comparison to the stack sizes of the players.

The blinds during the later middle stages and at the end of the tournament are usually much higher than the sizes of the stacks. I find small ball ineffective here due to the high cost of taking chances on speculative hands. A lot of players are close to or already have a short stack. I find little room for playing after the flop. Most players want to see anything but a flop during the later stages of the tournament. Whether they are representing a hand or actually have a hand, they want to bet so they are able to steal the pot.

There is no reason to lose a quarter or a third of my stack to see a flop with a bargain basement, long-shot or marginal hand.

Small ball is also dependent on my position. I must not continue to raise from my early position. I will have to fold if I am re-raised. If my opponent calls I lose my position for the duration of the hand.

When I am the only player near or on the button in small ball, this is the best position to be in. My success in small ball poker is dependent on having a lot of skill after the flop. This task becomes much easier when I have the poker position over all of my opponents. I believe in the saying it is easier to outplay one bird than an entire flock of them. It becomes even easier when I am the one who acts last.

The Best Way to Defend Myself from Small Ball Poker Players

I know I will not be the only small ball player in Texas Hold’em Poker tournaments. I also know the importance of defending against them by using a poker strategy for small ball. All small ball poker players are trying to add more chips without risking losing their entire stack. This means I will be playing with small ballers interested in seeing flops to bet off the hands of their opponents provided nobody is showing strength. When the other players look like they are holding bigger hands, they will fold.

Good small ballers are difficult to play against. They can read my hand extremely well while figuring out the meaning of my raises, bets and checks. I have learned if my opponents are better at small ball poker during this part of the game or have the tactical edge, my best option is to change the tactics I am using against them.

Most small ballers will usually not commit their entire stack for just one hand. One of my best defensive plays when I think my opponent will fold is to bet my entire stack. Realize this is the ultimate two-edged sword in poker. I know a lot of small ballers with better hands will fold. I also realize if one of the small ballers has a really good hand, I am risking losing all of my chips.

Most small ballers want to have position. This enables them to see what I do prior to having to act themselves. This is a good defensive tactic that does not require the player to take the big risk of pushing in their entire stack. I will only play to pots when I have the position on my opponents. This stops my opponents from gathering any information regarding my hand prior to acting on their own.

I can also make a bigger raise earlier. This tells my opponents I have no issue with the pot becoming very big by the river. I am also saying I might risk all of my chips because of the hand I am holding.

Small ball poker players want to make their skill the determining factor of the game by playing more hands and reducing variance. My best tactic when I am the player with the least skill is to make bigger raises and bets to increase the variance. This means if I think my opponent will fold, I am going to push. If my opponent has a greater skill differential, I will likely be ground down without a good defense. Daniel Negreanu “Power Hold’em Strategy” is always a good read. See you at the WSOP!

What is small ball poker?

Small Ball Poker refers to playing a wider range of starting hands more aggressively, but only using small bets and raises to save you from losing too much money when certain plays do not work out.

It’s not a matter of it works or not. It’s a matter of whether it works for you or not. If it’s a fit for for you, then yes, it could work.

Who is Daniel Negreanu?

Daniel Negreanu is one of the most popular poker players in the world. He is known most for small ball play, his friendliness and his reading abilities.