What are poker “flops”? Texas Hold’em uses community cards and the “Flop” is the first three community cards dealt face up by the dealer. It’s also the second round of betting. The texture of poker flops are far too important to ignore when you’re playing Texas Hold’em poker, yet a tremendous number of players do just that when they’re devising a poker strategy.

It’s honestly the kind of information that’s almost too easy to gather, yet plenty of players go entire poker games without really considering the texture of poker flops. It’s a shame that so many people just don’t put in the effort when the information is right there.

Reading the texture of poker flops is a key part of figuring out what everyone else at the table could possibly be holding. Yes, there’s a great deal of other information that goes into reading your opponent’s hand, but that information isn’t going to be nearly as useful as what you’ll get by knowing what’s on the flop. If you ignore this, you might as well stop looking at poker hands at all.

The truth is that the texture of poker flops is one of the primary things at which you should look when you’re deciding how to bet. In fact, finding a player who ignores the flop texture is pretty much a gift, because you know that you’re going to be able to take everything they have. When you understand the texture of poker flops, you’ll be able to make more accurate reads and walk away with more money in poker tournaments.

The Texture of Poker Flops

There are two basic types of textures to poker flops when it comes to boards – dry and wet. There are plenty of sub-classifications and granular differentiation, but you’ll be far ahead of the curve if you can understand the difference between these two basic board types. Consider this the foundation bit of understanding the textures of poker flops.

A dry board is a board that doesn’t offer many different possibilities. In other words, dry means that it’s limited – there’s not many ways to go to that particular well. On the other hand, a wet board is a board that can potentially be played in a number of different ways. There are boards that are in between, of course, but you’re generally going to consider a board to be wetter or dryer depending on the flop.

Looking closer, you can generally classify the boards by what comes out. If a board is dry, you’re generally looking at something that won’t support a flush, makes a straight very unlikely, and probably just has one big and two small cards. This isn’t exactly the kind of boards of which dreams are made, basically.

The poker flops you’re going to get on a dry board aren’t impossible to play, they’re just not likely to produce great results. They might make having a pair in the hole a lot more important, or they might support someone who has a truly strange set of cards in hand. One thing’s for sure – they make it hard for your opponent to build the kind of poker hand that’s generally a sure thing. When you look at this kind of flop, you can build a pretty narrow range when reading an opponent’s hand.

Here are some examples:

So, how do you play one of these boards? You start by paying attention to how people bet. If people are generally just checking around or just calling because someone else put up a low bet, there’s a good chance that the flop disappointed everyone involved. When people are playing conservatively at this point, it’s generally because they’re still holding out hope that something is coming later.

What if someone raises, though? If they raised early and everyone else simply called, there’s not much of a chance that there’s a straight on this kind of board. Everyone betting is either hoping for a miracle, has a pair, or they’re just bluffing in hopes that other players will fold out before things get too heavy.

It’s important to remember that dry doesn’t mean dead. A dry board can absolutely have a pair sitting out there for anyone, it’s just not going to support any kind of real winning draw. That’s what makes it dry – there’s just nothing out there that’s going to guarantee anyone a win. Someone could have a great hand (remember, that straight isn’t technically impossible), and someone could be counting on you to overthink the state of the board.

Try to remember that it doesn’t take much to win on a dry board. Having a pair might be enough, even if your kicker is pretty tiny. As long as a player can put together something, they have a good chance of walking away with the hand.

Since dry boards are the unfriendly boards without options, it makes sense that wet boards are the boards that give players a ton of possibilities. These aren’t just boards that have good cards out there – these are boards that a good player can use to create an absolutely outstanding hand.

Some examples of wet boards:

Wet boards can really vary in terms of what kind of game they produce. If they are well-coordinated – that is, if they support multiple straights or flushes – there’s a good chance that players are going to stay in the pot because they think they have a chance. The big draws also make it very hard to win with something like a pair, even if there’s a good kicker.

When players look at wet boards, they’re looking at cards from the playing zone – that is where the good cards live, where the cards that players actually want reside. These are the face cards, the cards you need to get up to the big money and ultimately to win those dramatic confrontations. If cards from this zone come out, players are going to get aggressive because they really want an excuse to go big.

Introducing Board Texture and Continuation Bets

Figuring out the texture of the board is going to give you the information you need to determine whether it’s a good idea to put down a continuation bet. The good news is that most players get this by instinct, if nothing else. If the flop comes out in a way that looks good, you bet – you figured that out the first time you played. What you might not have figured out, though, is what to do when the flop misses you.

Let’s say that you raised before the flop and you had an Ace and King. Congratulations, you have about a one in three chance to get something useful out of the flop. What you need to learn now, then, is how to read the texture of the board and your opponent’s range to figure out if you should keep on betting or save your money.

Generally speaking, players are more likely to fold on a dry board than a wet board because it’s obvious to see how things could fall apart. If you raised before the flop, there’s not much of a chance that the flop helped your opponent, and you can keep betting because you know that the other party will likely fold. You know that he doesn’t have anything, after all, and he has no clue what you’ve got. It just makes more sense to fold than to lose more money later.

If the board’s dry and you were the pre-flop raiser, go ahead and keep betting to force the player out. If he or she is not a particularly good reader of the board, you’re going to take the pot more often than not. You’ve got to be careful with your betting here so that you don’t give away too much information, but you can safely start chipping away at the pot if you’re careful. 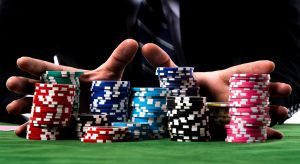 Baiting an aggressive opponent is even easier when you can read the flop texture of a board. In this scenario, let’s say that there was a raise before the flop and you called with a reasonable hand. Assuming that the flop comes out and doesn’t support something like a flush, you probably don’t need to worry about it even though you don’t have a hand quite yet. What you might have, though, are a number of very interesting possibilities.

Let’s continue the scenario and assume your opponent has something reasonable – a pair of big connectors, or maybe an okay pocket pair. If he raised in front of you, the odds are actually on him not having a pair and the flop probably didn’t work in his favors. There are a few hand combinations that absolutely could see him come back with another bet, but there’s actually a good chance that you’ll force him out before you ever see the turn. Not bad, right?

Let’s go back to the scenario and assume that everyone actually stays in. There are now two overcards on the board and you’ve got nothing. The obvious move is to check because it’s not going to cost you anything, and you’re going to hope that everyone follows you. Still fairly easy.

You’re in late, so you open raise. It’s fine if it’s a low-card flop, because this is going to hurt people who call more than bet. You’re still safe, because the flop probably missed everyone – not bad. If your bet gets called, it’s because your opponent is either on the draw or has a pocket pair, so you’ll need to be careful moving forward.

If the turn is big, everyone is going to get skittish. Even if you’re not looking good statistically, you can go for the pot because there’s a good chance of others getting scared off. If the turn is a low card, though, you need to play it safe – you could survive with a check, but it might be a good time to fold and save your money if someone else raises.

In the end, you need to understand the flop texture, as well as the texture of the board after the turn and the river. If you can pay attention to that, you’ll be better able to read your opponent and better able to turn the odds to your advantage.

You have to remember that reading the flop texture is one of those skills you’ll need to hone if you ever want to be a serious WSOP poker player, especially if your goal is to start playing in Texas Hold’em poker tournaments and to walk away with money. If you can learn how to properly use the poker rules and the information in front of you, you’ll be in a better position than the majority of the people who you play against.

What are flops in poker?

Flops are the first three community cards dealt by the dealer. It’s the second round of betting.

These are the cards that every player can use to make the best five-card hand possible. The community cards are the three flop cards, the turn card and the river card.

What does flop the nuts mean in poker?

Flopping the nuts means you flopped the best hand possible. You made the best five-card hand possible between the three community cards and your two hole cards.

Who bets first after the flop?

The small blind is first to act, but they don’t have to bet. They can also check. The button is the last to act, which makes it the most advantageous position.