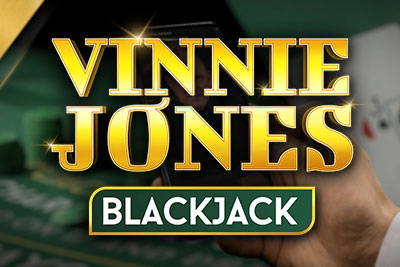 The games are presented in a unique way and available exclusively through Games Global, the owner of Microgaming’s progressive jackpot network, slots, development studios, and other assets and services.

If you can imagine playing blackjack or roulette against a non-AI hologram in a two-dimensional format, you get part of the picture. While you will be playing one-on-one with Vinnie, he won’t really be there but it will seem like he is once you adjust to the game concept and immerse yourself in the experience.

The company calls its technology and presentation “Cinematic RNG” – in a nutshell, movie-quality prerecorded video footage is integrated into random number-generated gameplay.

Just as in an animated digital RNG online blackjack game against an invisible dealer, all cards are drawn using a random number generator tested by the same laboratories and testing houses that certify the fairness of slots and other games.

At each step of the game, the software has multiple options based not only on the cards drawn, but also on your choices, and the locked-in math realities generated by the game rules. The game engine chooses a prerecorded clip of the actor “doing what a dealer would do” at that point in the game and renders the scene so you won’t even know: “It’s not Live, it’s Real!”

The process of putting the footage together and transitioning from scene to scene flawlessly is about the same as producing a Hollywood movie. An entire production crew with a director and all of the behind-the-scenes activity that goes into a movie such as Lock, Stock and Two Smoking Barrels; Snatch, or Mean Machine occurs before we interact with the iconic actor throughout the game.

Best of Both Worlds

The unique game genre bridges the gap between straight RNG games with computer-generated graphics, and the live-streaming dealer-hosted games found at most online casinos today – it melds the best of both worlds.

Shane Cotter, Chief Product Officer at Real Dealer Studios said: “There just hasn’t been anything like this on the market before – an RNG blackjack game with this sort of personal interaction, and starring a celebrity to boot”.

A third game in the series (see first release here), Vinnie Jones Stories Roulette is expected to be released in about a week with even more Vinnie Jones titles planned for release in the new year.