Tadej Pogacar had one final chance to erase a 2:18 deficit on Jonas Vingegaard in the Pyrenees Mountains, but the two-time defending champion had an unfortunate crash on the descent of the Col de Spandelles, and then got dropped on the ascent of Hautacam. Vingegaard rode to a solo victory in Stage 18 — his second stage win on Le Tour — and he essentially locked up the yellow jersey in the 2022 Tour de France with three stages remaining. 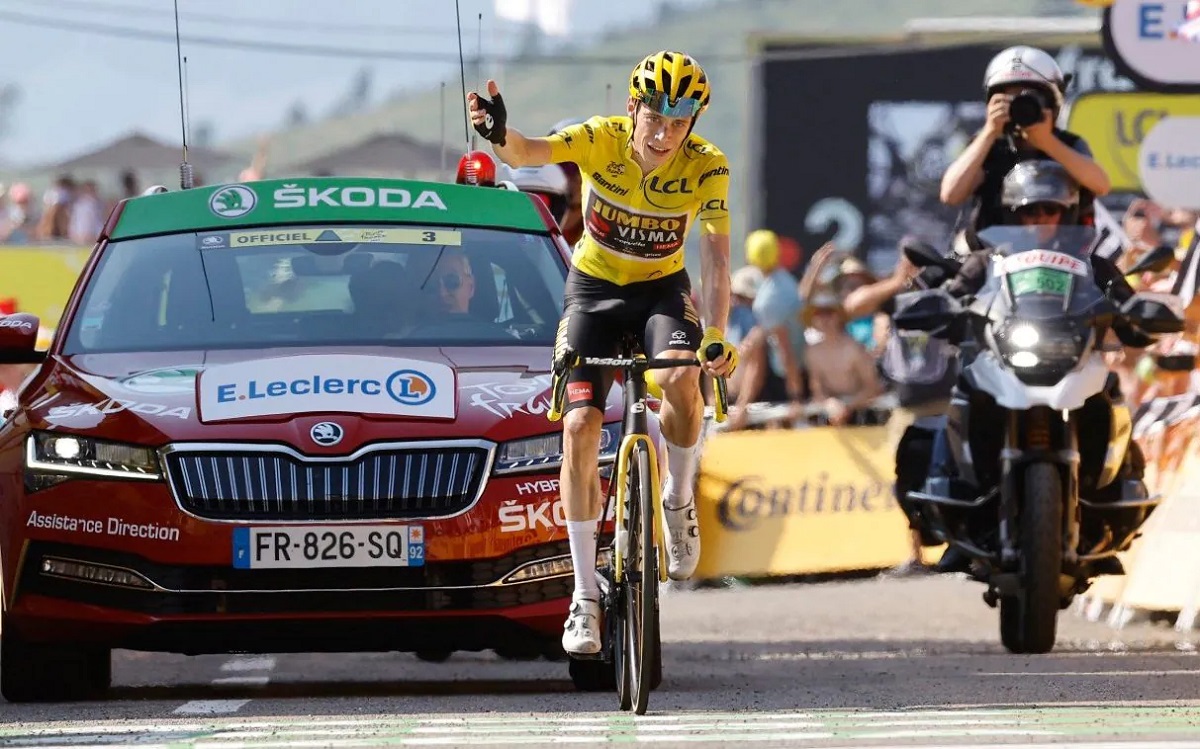 After his Stage 18 victory at Hautacam, Vingegaard (Jumbo-Visma) now leads Pogacar (UAE Team Emirates) by 3:26.  A jubilant Wout van Aert celebrated as he crossed the finish line in third place. He was pumped for his Jumbo-Visma teammate, Vingegaard, who just needs to avoid a serious crash in the final three stages to win his first-ever Tour de France.

Van Aert went full gas from the start of Stage 18, and the fearless Belgian enticed a breakaway group of about 27 riders. The lead group was decimated and cut in half on the HC category ascent of Col d’Aubisque. Thibout Pinot was among the dozen survivors in the initial breakaway. He was trying to become the first French rider to win a stage on Le Tour, but he’d crack on the final ascent of Hautacam and finished in tenth overall.

Stage 18 included a pair of beyond categorized ascents including a steep climb to the summit of Hautacam. However, it was the descent of Col de Spandelles that ultimately determined the entire fate of the Tour de France. The race organizers never used the Col de Spandelles before because it was too difficult and somewhat dangerous. They repaved segments of the descent, but the poor condition ended up determining the outcome of the stage and entire race.

With Vingegaard on his wheel, Pogacar forced the action on the windy descent of Col de Spandelles in hopes that Vingegaard will make error, or outright crash. It nearly happened with 31 km to go on a sharp turn, Vingegaard caught a single pebble of loose gravel and nearly ate asphalt. The Dane – with his patented stone-cold poker face the entire race – never panicked and it was a near miracle he stayed on his bike with a magnificent acrobatic balancing act. Vingegaard avoided a crash, which could’ve cost him the yellow jersey.

😱 What a scare for Jonas Vingegaard !

The loose gravel on the twisty turns was an embarrassment to organizers. The road was the worst maintained descent on the Tour de France route this year. It cost Pogacar a chance to win the stage and trim his deficit. Less than two kilometers after Vingegaard’s close shave, Pogacar went wide and loose gravel ended his pursuit of a three-peat. Pogacar skidded into the grass and suffered a crash with 28.7 km to go. Pogacar quickly hopped back into the saddle, but TV cameras captured the huge rip in his bike shorts with a visible road rash on his left lower butt cheek thanks to the crash.

“I was quick back on the bike with a few bruises, but a hit on my ass,” said Pogacar.

Vingeggard offered a surprising, yet admiral bit of sportsmanship. Vingegaard did not push action, and waited for Pogacar to catch up after his crash. At that point, they were still behind the lead group and van Aert by 1:27.

😱 @TamauPogi crashed! But Jonas Vingegaard waits for him.

Van Aert made a move with 9 km to go, and only Dani Martinez stayed on his wheel. They both dropped fan favorite Pinot.

American Sepp Kuss was in the initial breakaway and a part of the front group with van Aert, but the Jumbo-Visma domestique slowed down to help pull for his teammate Vingegaard. They were 25 seconds behind van Aert with less than 6 km to the finish line, but they easily wiped out that deficit over the next kilometer.

The trio of Kuss, Vingegaard, and Pogacar caught and then dropped Martinez. They chased down van Aert with 5.2 km to go. A gassed Kuss begged off, and van Aert took over for his teammate and pulled for Vingegaard for the final 5 km. Even though Jumbo-Visma was shorthanded heading into the Pyrenees, Vingegaard was damn lucky to have two teammates at the front of the race to help him on the final ascent of Hautacam. In the case of Pogacar, he did not have any UAE Team Emirates teammates anywhere in site to offer assistance or water.

“The Tour de France might be over,” declared announcer Phil Liggett.

Liggett, the legendary British sportscaster, covered the Tour de France for the last 50 years. When Liggett says it’s over … it’s over.

With 3.6 km to go, van Aert backed off and let Vingegaard attack solo. Vingegaard gapped by Pogacar by 30 seconds and won by over a minute.

“After the crash, I lost a bit of motivation on the final climb, but still pushed my limits,” added Pogacar. “Today, the best man won.”

“It was a masterpiece, the whole team was strong today with two guys in the break,” said Vingegaard. “Wout was incredible. Sepp was incredible. I have to thank my team today. This victory today is not possible with them.”

With a flat stage on deck, expect sprinters — if they have any legs left — to have a bunch sprint finish after a somewhat long 188.3 km ride from Castelnau-Magnoac to Cahors. There’s two baby Category 4 climbs in the middle of Stage 19, but expect the teams that have yet to win a stage do everything possible to control the race and put their sprinters in an optimal position to win a sprint.

Expect previous sprint winners — van Aert, Jasper Philipsen, Fabio Jakobsen, Dylan Groenewegen — to be installed as the betting favorites in Stage 19, with each sprinter attempting to win another stage. In the case of van Aert, he already locked up the “green jersey” for the best sprinter in the peloton, but he seeks a third stage victory this year.

Pogacar is unable to make up his 3:26 deficit. He planned to trim the lead to around 20 seconds before heading into the time trial on Saturday for a shot at regaining the yellow jersey. However, impossible to make up three minutes without any more mountain stages.

“The Tour is more or less decided,” admitted Pogacar. “I congratulated Jonas on today and on the Tour. I think he’s won it.”

Vingegaard is now -5000 odds to win the Tour de France, while Pogacar is +1800 odds. At this point, if you’re betting on Pogacar you do not understand how cycling betting works, or you’re hoping that Vingegaard tests positive for COVID and has to drop out of the race. Rest assured, Jumbo-Visma will keep him in a bubble through Paris to make sure he takes the top step on the final podium on Sunday.

Check out more coverage of the 2022 Tour de France.