After five hours of intense competition, Thang Ngoc Dao is the newest World Poker Championship Main Event champion! He eliminated five players at the final table that included fellow countryman Hung Van Huynh at heads up to clinch the title and an ICM payout deal of ₫1,540,030,000 (~$65,700). Relive the Final 8 race to victory via the live updates. 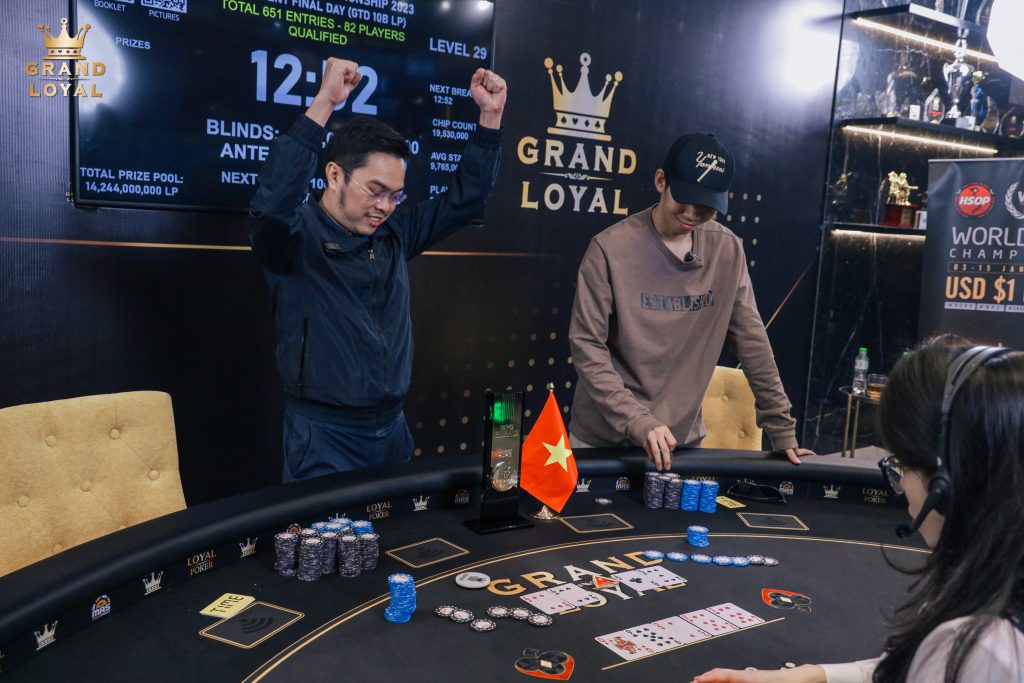 In partnership with the Hanoi Series of Poker (HSOP), the WPC Main Event ran from January 10 to 14 at the Grand Loyal Poker Club in Hanoi, Vietnam. It drew 651 entries over four starting flights for a guarantee crushing ₫14,244,000,000 (~$607,600) prize pool. At Day 2, 82 players battled for a spot in the Final 8. After a 15+ hour grind, the lineup was formed with Hong Kong’s Hoi Wai Tam as chip leader. Thao Ngoc Dao was one of three Vietnamese players that made the cut, all of them were wedged in the middle.

Recapping the action, it was tight at the start. UK’s William Kang dominated the first hour with back to back pocket Kings catapulting him from 7th rank to 3rd rank.

During the second hour of play, plenty of changes up top. Kang was first to overtake Tam, India’s Apoorva Goel survived a flip against Korea’s Hyun Sup Kim then dragged in a heavy pot to earn him his time in the leader’s chair.

The third hour of play was brutal for Kim and Tam. Kim was first to nosedive with trips losing to Huynh’s flush to drop to 4 BB. Before Kim packed up, Tam plunged to 1BB with

. This sent Dao soaring to the top while Tam became the table’s first casualty.

It was a knockout fest in the fourth hour starting with Kim whose pocket Eights ran into Dao’s pocket Aces. UK’s Grant Gardner was next. He started the day at the bottom and barely moved to fall to Huynh in 6th place.

After several hands five-handed, the players struck an ICM deal and played on for the title and remaining cash. Goel was first to go with pocket Tens dominated by Huynh’s pocket Queens. The hand gave Huynh over 40% of the chips in play and the lead but his time up top was brief. Dao quickly reclaimed it when his

paired on the river to survive Huynh’s

. Dao went on to rail Kang, again with King-Queen successful, pairing the King to dust pocket Queens. Kang was the last of the international players vying for the title.

Dao led in the all-Vietnamese three-way race. He proceeded to clean out Thanh Huy Le for his fourth bust out. He entered heads up with 87 BB and faced Huynh with 45 BB. Though deep, the title was clinched in under 15 minutes. With no big change in stack size, Dao three-bet shoved with

, Huynh tank-called for his tournament life with

. The flip was good for the Dao as the final board ran