In case you forgot how good United Nations Stakes favorite and defending champion Tribhuvan can be when he’s given the lead, the 6-year-old gelding provided you another lesson on Belmont Stakes day last month. 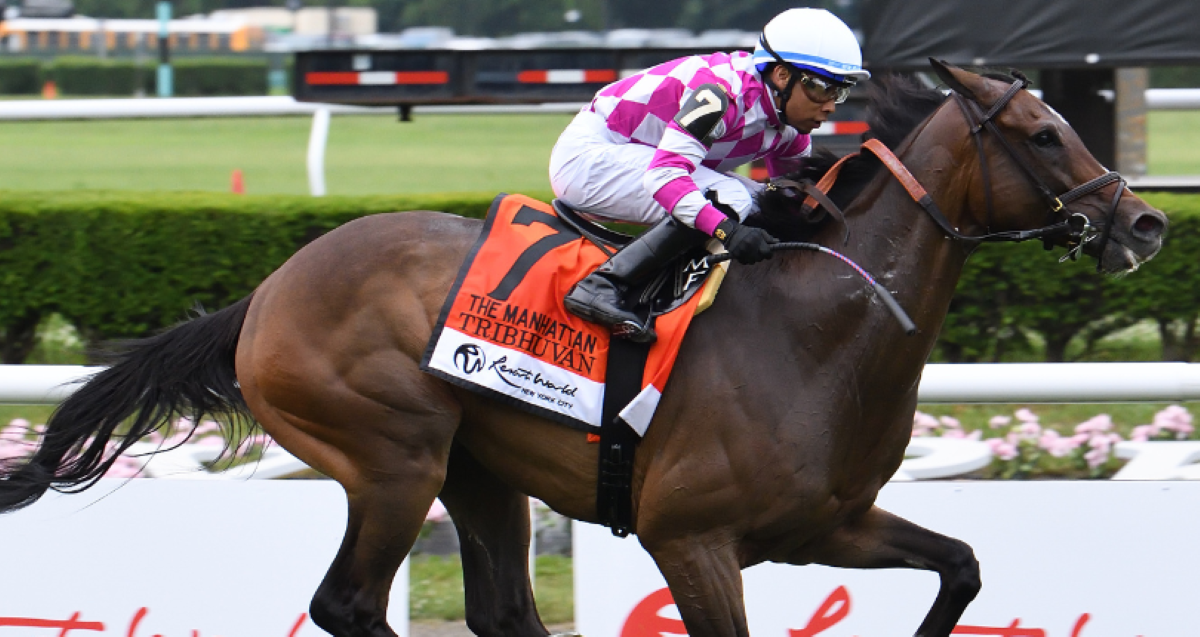 Tribuvan made last month’s Grade 1 Manhattan Stakes look easier than his 3 1/2-length victory. Now, he seeks a defense of his title in the Grade 1 United Nations at Monmouth Park. (Image: Viola Jasko/NYRA.com)

The French-bred son of Toronado outran his foes and outran his 19/1 odds, going gate-to-wire for a 3 1/2-length victory.

And in case you forgot how bad Tribhuvan can be when he’s given the lead, he provided you several reminders since that United Nations win last year. Sent to the lead in the Grade 1 Sword Dancer, Breeders’ Cup Turf and Turf Classic, Tribhuvan failed to hit the board in all three. He finished fifth in the Sword Dancer and this year’s Turf Classic and 12th in the Breeders’ Cup Turf.

Yes, Tribhuvan comes into Saturday’s Grade 1 United Nations at Monmouth Park as your defined front-end speed. En route to a two-length victory in last year’s United Nations, Tribhuvan led at every call. He led by as many as five lengths after a half mile. And he did so as the 8/5 favorite.

Tribhuvan was a oddsmaker’s burp in the Manhattan

He’ll be at or below those odds again Saturday. Forget getting him at 19/1. First, the Chad Brown factor will kick in on the toteboard, especially since the trainer won four of the last nine United Nations. Second, Monmouth Park is a faster track than Belmont Park and Tribhuvan faces little front-end pace pressure from his nine rivals in the 1 3/8-mile turf test.

What front-end speed he’ll face figures to come from Carpenters Call and Epic Bromance, neither of whom have the tactical or raw speed Tribhuvan possesses. Epic Bromance did hang around the lead last year, stalking his way to a piece of the board. He finished third by three lengths — at 61/1.

Epic Bromance, one of two Mike Maker entries in the field, has rewarded his supporters at Monmouth Park. He comes in off a last-out third in the Grade 3 Monmouth Stakes, the prep for the United Nations. That came at 58/1.

But before then, the Kitten’s Joy gelding finished 12th, ninth and fifth in a trio of graded stakes. Expect him to stalk, but don’t expect him to have the speed to pounce.

Then, there’s Gufo, who makes his Monmouth Park debut. The millionaire and fan-favorite missed the board only once in 17 races (8-3-5). That came in last year’s Breeders’ Cup Turf, when he finished a no-show 10th by 10 lengths at 8/1.

Those 8/1 odds are the loftiest Gufo’s backers have seen in his last seven races. Gufo hasn’t gone off at better than 5/2 in those seven races, although he’s won three of them. His question is whether three turns is a turn too many for his stalking, rallying style.

Brown’s second entry after Tribhuvan is Adhamo, who finished second to his stablemate in the Manhattan. The 4-year-old Irish-bred colt has finished 2-3-2 in his last three races: all graded stakes. He has the class, but may not have the speed to do anything but get a slice of the board.

The United Nations is the 11th of 14 races on Monmouth Park’s Haskell Day card. It immediately precedes the Haskell.