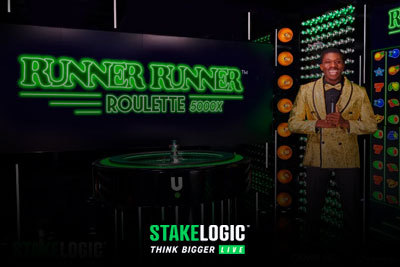 Players will hope to trigger a special bonus round that can deliver multipliers up to 5,000x.

Fast-paced gameplay and huge win potential will only be available at Unibet, at least for the time being. After a successful launch of Super Stake Roulette 5,000x in the Netherlands earlier this year, about three months ago the game was released to global markets. While there are similarities, Runner Runner has its own allure and thrill factor.

During gameplay, one to five numbers will be projected onto a screen behind the table, and if the ball lands on one of the projected numbers a bonus round is triggered.

Roulette Multipliers up to 5,000x

In the bonus game, Runner Runner symbols which are derived from the company’s Runner Runner (2016 slot), Runner Runner PopWins, and Runner Runner Megaways slots, are superimposed on another studio screen (Strawberry, Melon, Star, Bar, 7, etc.). Hidden behind the symbols are random multipliers that range from 50x all the way up to 5,000x.

The Runner Runner icons are then shuffled and the player chooses one, hoping for a big multiplier. Whichever multiplier is hiding behind the chosen symbol is applied to the game.

The studio backdrop is stunning with neon lights and a real show business vibe. Some observers’ eyes are drawn to the roulette wheel itself. We found it to be a TCS JOHN HUXLEY SATURN Roulette Wheel. It would seem to be the perfect choice for a fast-paced game.

Games are Broadcast from Stakelogic’s Studios in the Netherlands

It’s a thing of beauty and a site to behold sitting in Stakelogic’s Dutch studios.

Head of Live games at Stakelogic, Richard Walker said: “Runner Runner Roulette 5,000X promises to put Unibet players on the edge of their seats as the numbers appear on the screen with each spin. If they match the winning number, the bonus triggers and they can enhance their win with a massive Multiplier.

This is one of our most visually impactful live roulette games to date – the studio really is a cut above others in the Netherlands and ensures the game delivers unrivaled levels of fun and entertainment.”

Martina Mlcochova, Head of Live Casino at Unibet, said: “Stakelogic Live has become a crucial partner for us in the Netherlands and the exclusive launch of Runner Runner Roulette 5,000X is another big moment for us. This is a high entertainment game that will be a big hit with our players for sure.”

Unibet provides separate mobile apps for sports betting, casino and live casino, and poker in all regulated markets. If you visit the site, geolocation software will place you in the proper silo for language, currencies, and promotional offers.