Swinging day at WPT Prime Cambodia with four tournaments scattered around the ballorom of NagaWorld Phnom Penh. Trong Hieu Ngo emerged the biggest winner, two players from India lifted trophies, and the heavy hitters were in battle gear at the Super High Roller. Here are the highlights. For pics, head to the Somuchpoker FB page.

Trong Hieu Ngo banks it big at the Mystery Bounty

Vietnam‘s Trong Hieu Ngo was the most envied player at the Mystery Bounty when he pulled the lone US$ 10K top bounty reward… and he did it on just the fourth pull of the day! Ngo went on to ruin eight players’ hopes in Day 2, defeating famous Japanese musical artist Gackt at heads up. Ngo collected a large US$ 16,750 in bounties plus the US$ 18,400 top prize for a combined US$ 35,150 payout. This was his second largest career score and first ever WPT title.

while saying “it’s my birthday hand”. Ngo turned up

and replied “birthday no good!” True enough, it wasn’t, as the board dropp blanks. Somuchpoker was hoping to catch up with Ngo for a brief interview but he quickly grabbed a seat at the ongoing Super High Roller event. No matter, the smile says it all.

Down to two tables, Flight B chip leader Yuri Ishida was the recipient of a two-outer bad beat when her pocket Aces were cracked by Ruslan Belinskiy’s pocket Kings. With both players sporting very healthy stacks, she plunged and soon settled for 17th place. Hands later, Belinskiy amassed the chip lead after outkicking Aladin Reskallah into 10th place. This was his first takedown of the day which formed the final table.

Belinskiy quickly picked up where he left off. He eliminated the day’s entering chip leader Alexander Puchalski (9th) followed by Gaurav Sood (8th) who had just paid Kunal Patni a huge double up with pocket Eights holding against Ace-King. Patni collected more after getting lucky on Jasven Saigal but Ngo quickly put an end to it with

. Patni finished 5th which was good enough to overtake Semen Kapitonov in the Player of the Festival race.

Backed by a massive stack, Ngo finished off Belinskiy in 3rd place and entered heads up out front 60 BB against Gackt‘s 39 BB. Ngo dominated the action, grinding down the Japanese rock star to clinch the win and the coveted WPT trophy.

“It feels great to finally win a live event. I normally grind online now but this is my first ever live series in Asia and I binked my first trophy in just my fifth event! I It feels great. This one goes out to my poker mentor Danish Sheikh who has a big role in shaping how I play today. Hope I can grab a few more trophies before the end of the series.”

Two years ago, at the height of the pandemic, Kapoor moved back to India from Australia where he joined a group to improve his online game. Through there, he met many of the poker players in the Indian community whom he traveled with to the series. Kapoor became the third player from his country to lift a trophy at the ongoing festival, following in the footsteps of Ashish Munot (NagaWorld SuperStack) and Kunal Patni (Deepstack NLH).

The event drew 128 runners at US$ 400 a piece for a prize pool of US$ 44,698. The bubble burst on Filipino player Junnie Pamplona who was also in his first live event outside of home soil. Pamplona could not pick up that first cash with

losing the race against Kyungtae Lee‘s pocket Queens. Shortly after, the final table was formed.

Early on, Lee dominated the action, railing multiple players to build a massive stack. Taiwanese pros Yu Chung Chang aka Never and Zong Chi He were big threats at the table until Chang busted 9th and Zong lost a costly shove against Hyunyong Bae with pocket Eights dusted by pocket Nines.

. Kapoor also enjoyed a double up through Lee with the same hand of Queens over Nines. Billups took the lead when he finished off Japan‘s Muneyuki Tanimura in 5th place. Down to four, the players checked the numbers and an ICM deal was reached with Billups guaranteed the largest cut. They then played for the coveted title and trophy. At heads up, Kapoor led in chips against Billups and closed it out with

on a dry board.

Zarvan Tumboli is back in the headlines, this time for winning his first ever WPT side event trophy. Three months prior, Tumboli shipped the inaugural WPT Prime series Main Event in Ha Noi, Viet Nam and now another stellar performance. He outdueled Tunisia’s Selim Souissi who finally agreed to deal and award Tumboli the trophy.

“I’m pretty happy. This was my third consecutive PLO heads up and third PLO trophy. This is my forte. Against this field I was taking many spots and especially on the bubble; that’s where I chipped up the maximum. I was a bit worried about the structure, I didn’t want to get bad beat and bust, but the cards fell in my favor so here I am. Two for India today!”

The PLO was another big attraction with 94 entering, among them was top vlogger Andrew Neeme. Just past the seventh hour of play, Neeme was already far gone and was joined by Daniel Chin on the rails with (ah}

two pair on a board

. It didn’t take long for the next three to fall to form the final table.

By four handed, Tumboli was backed by an immense stack followed by Hye Min Choi and two shorter stacks with roughly 13 BB each. After checking the numbers, the deal was rejected. The next shove saw the big stacks Tumboli

face off with the latter crushed in 4th place. Tunisia’s Selim Souissi cleaned out Russia’s Evgenii Chzhen (3rd) for the last leg to the finish. Despite Souissi‘s attempts, the massive stacked Tumboli could not be cracked to end the game in a handshake deal. 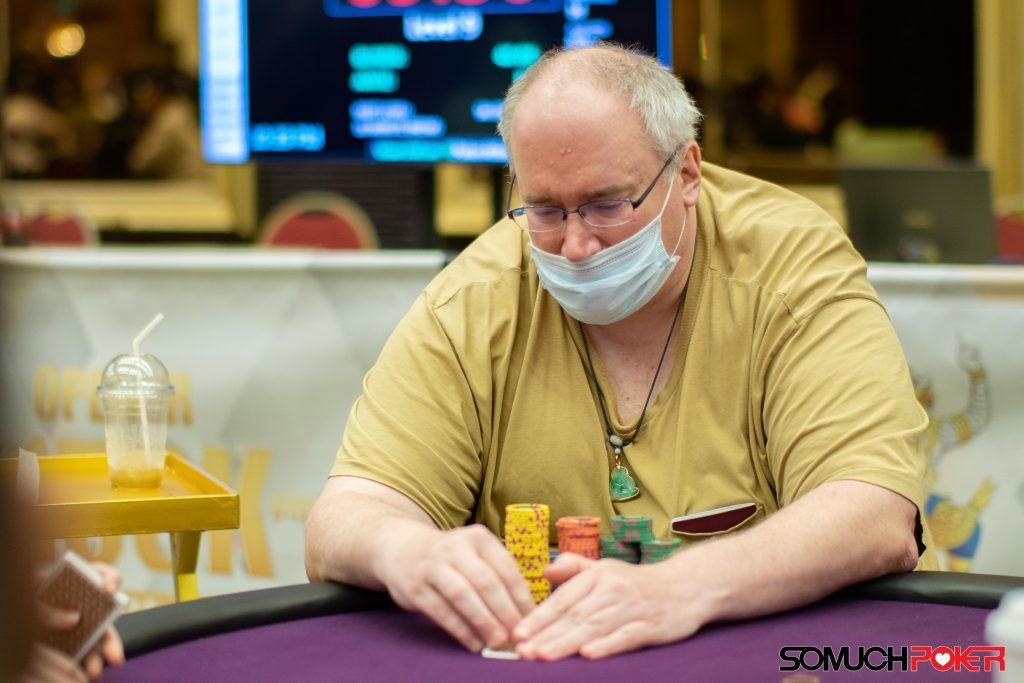 An adjustment was made to the Super High Roller event. Due to player requests, registration closes at the start of Day 2 which takes place on Wednesday, August 17 at 1. For those jumping in, be there before 1pm to secure your spot. Blinds open at 5K – 10K. Buy in is US$ 5,300 with a starting stack of 250,000. The event currently has 45 entries with a prize pool of US$ 218,250. Day 1 closed with 23 remaining players, among them were Thailand‘s Punnat Punsri who is back in Asia after a spectacular WSOP run, WSOP bracelet champions Mike Takayama and Abhinav Iyer, Phachara Wongwichit, Florencio Campomanes, Vincent Huang, and Florent Remi to mention a few. Sweden’s Matt Douhan bagged the chip lead of 1,295,500, Denmark’s Michael Kim Falcon running second with 965,000.

Stay tuned to Somuchpoker as we bring you updates on the ongoing WPT Prime Cambodia at NagaWorld Phnom Penh. For pics, head to the Somuchpoker FB page.