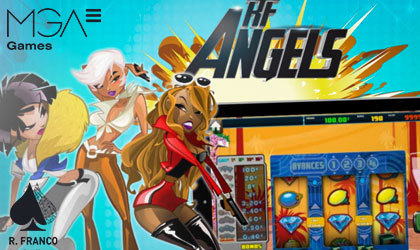 R Franco (RF) of Madrid and Barcelona’s MGA Games have released their third collaborative effort with an online version of RF Angels, an instant play HTML5 browser-based rendition of the popular floor game first launched on Spanish floor cabinets in 2016 – the same year the R Franco online brand was borne. The title is one of the most easily recognizable R Franco slots in local parlors and now Spaniards can access the game from the comfort of their own homes or anywhere they roam.

Based on the legacy television series, Charlies Angels, remakes of the franchise in the early 2000s, the game’s popularity later got an unexpected boost when Kristen Stewart, Elena Houghlin, and Ella Balinska jumped into the adventure on the big screen in 2019. Just as they do in the game, the intrepid protagonists of the narrative ply their trade in investigative work using all their feminine wiles, next-generation technology, adrenaline, and glamour to deliver non-stop action and thrills.

The online version is faithfully reproduced for instant play in the Spanish market leaving no detail overlooked. Adding to the “instant casino in your hand” effect is the addition of MGA Games’ Triple View technology that optimizes the gaming experience on any device, and a new maths model of medium volatility.

This is the Third of Six R Franco Games with MGA

The two firms began their collaboration in the public eye earlier this year with an online release of the legendary land-based slot game Santa Fe Mix for online casinos in late March followed by the 3-reel premium game, Gnomos Mix at the end of May. This is the third release with three more in the pipeline to complete the six-pack of agreed-upon games this year.

The gameplay on RF Angels starts with 3-reels and one payline. Players collect points to unlock the bonus or top game. The top game uses up bonus points plus credits with each non-winning spin with up to 8 paylines and expanded betting options. Free spins can be triggered in the base game and a jackpot picking game opens up after collecting enough icons. AWP games such as this one with multiple play zones and progressive achievements can give players a sense of control and mastery over the game.

While the game maintains all of its original glory, it has new maths to make it even more engaging and the user interface inspires memories of the cabinet game with “its Advances, the Auto button, the Retention button, and the Autoplay button that activates the auto-mode button,” according to a joint press release from R Franco and MGA Games.

Play the Spanish version or play the game in English.

Like the previous two games, RF Angels was released a couple of weeks early at select outlets. Before July 25 RF Angels could be found at Bwin, Sportium, Pastón, Wanabet, and Goldenpark.