You almost get the feeling that with Life Is Good and Olympiad heading the marquee for Saturday’s Grade 1 Whitney at Saratoga, this 1 1/8-mile race sets up as more than one of the top older horse dirt races in the country. 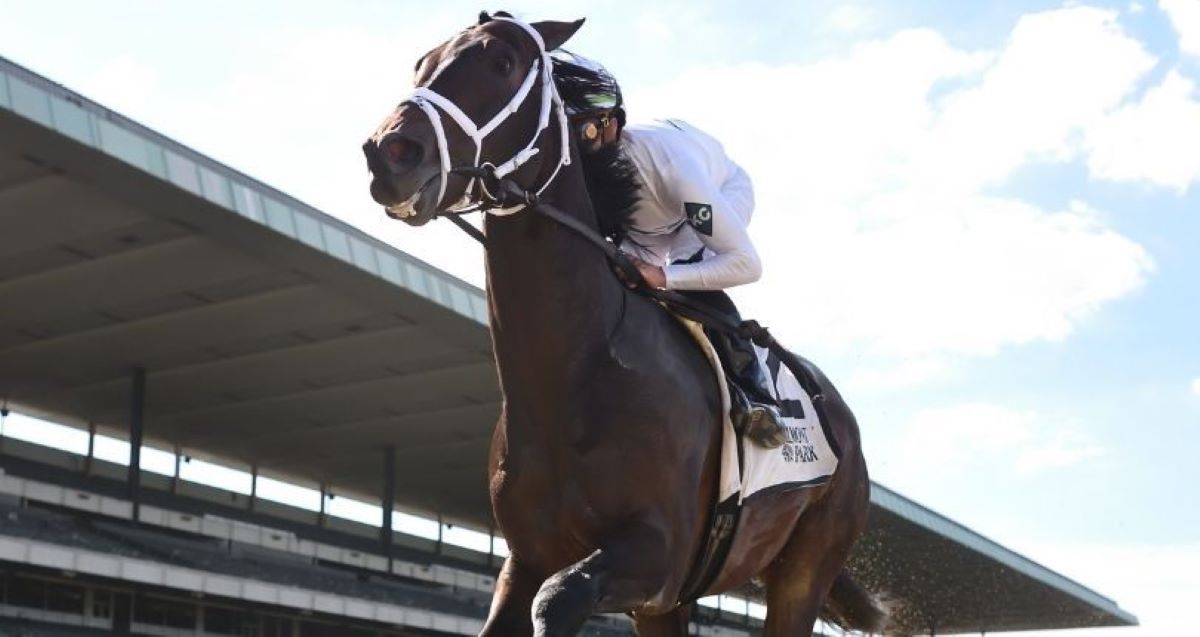 Life Is Good rolled up a 112 Beyer Speed Figure and a 5 1/2-length victory in last month’s John A. Nerud Stakes. He’s the 6/5 morning line favorite to win one of the biggest older horse races in the country: the Grade 1 Whitney Stakes. (Image: NYRA Photo)

It sets up as a something-to-prove test. Because this year’s Whitney, the headliner on a 12-race, three-Grade 1 card at Saratoga, puts its six contenders into a competitive blender to see who is the main challenger to the one older mainstay who isn’t here.

And, barring injury or other mishap, the winner will get that opportunity in November’s Breeders’ Cup Classic at Keeneland. As a “Win and You’re In” race, the Whitney sends its winner to the $6 million Breeders’ Cup flagship.

The Whitney is one you want on the resume

Yes, the Whitney is a kingmaker’s race. It’s Saratoga’s second most prominent race after the Travers. But it’s also a statement race. Win the Whitney and you become first-among-equals in the Older Male Division. You become the horse to beat going into the Breeders’ Cup.

“It’s the premier older horse race at the premier meet in the country. To me, it’s a huge, huge event,” trainer Todd Pletcher told the New York Racing Association.

Ergo, Pletcher treats it as such, flooding the zone with three of the six Whitney contestants.

That came in his last-out, five-length blitzing of Speaker’s Corner in the John A. Nerud at Belmont Park. That form-resuming victory came after Life Is Good finished fourth in March’s Dubai World Cup — the six-time graded stakes winner’s only off-the-board finish in nine starts.

“He’s got so much natural speed and such a high-cruising speed,” Pletcher said. “His ability to carry it over a distance of ground is what makes him so unique and so successful.”

It’s not one of his stablemates: Happy Saver or Americanrevolution, who figure as Life Is Good’s main competition. It’s Bill Mott’s Olympiad (2/1). Not a factor in any conversation about the best older horses entering this year, Olympiad forced his way into the discussion by opening his 4-year-old season 5-for-5.

That streak began with a 7 1/4-length dismantling of a Gulfstream Park allowance field. It extended into Grade 3 Mineshaft and Grade 2 New Orleans Classic wins at Fair Grounds. Then, the streak migrated to Kentucky, where Olympiad won two Churchill Downs races: the Alysheba — where he beat Happy Saver — and Stephen Foster.

All this from a colt who hadn’t run two turns before this year.

“He loves the two turns and it seems like the longer he goes, the better,” said Robert Clay of Grandview Equine Farms, Olympiad’s co-owner with LNJ Foxwoods and Cheyenne Stables. “He sort of has it all, so now we’re running against the gorilla in the room and find out how good he is. I think he’ll run a good race. He’s training really well.”

A victory here gives Olympiad his first Grade 1 win, something Clay and Mott are quite cognizant about. Life Is Good, Hot Rod Charlie, Americanrevolution and Happy Saver all own Grade 1 wins. Olympiad needs one to join them as a legitimate older horse.

“It would be very important. He’s been rewarding in a lot of different ways and just by seeing him run some very good races,” Mott said.

Which brings us to Hot Rod Charlie (9/2). When last we saw him, Hot Rod Charlie was losing the Grade 3 Salvator Mile at Monmouth Park to Mind Control. That came after a runner-up to Country Grammer in the Dubai World Cup.

While Hot Rod Charlie hasn’t missed the exacta in three starts this year (1-2-0), he could use a domestic victory. The last time Hot Rod Charlie won in the States came six starts and 11 months ago: in the Grade 1 Pennsylvania Derby.

When trainer Doug O’Neill put the pieces together, it made sense for him to keep Hot Rod Charlie on the East Coast.

“We all huddled up and it looked like the race fit him well on the calendar,” O’Neill said. “With the Breeders’ Cup being at Keeneland, we love the opportunity to be able to train at Keeneland and popping up to New York didnt’ seem like something that was going to be out of line.

“It’s a Grade 1 at Saratoga and it’s such a prestigious race. There’s a lot of reasons to be proud just to have a horse in it. I can only imagine if he won it how grateful we would be. It would just confirm his gutsy, hard-fought efforts all over the world to come together for a Whitney victory. It would really confirm his greatness.”