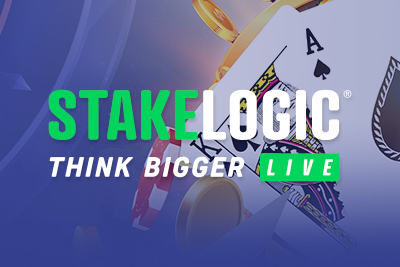 Competition for players who enjoy online live dealer casino games continues to heat up with Stakelogic Live establishing itself in the premier licensing jurisdiction of the United Kingdom. The Gambling Commission in Great Britain has allowed the operator to begin serving their games for the first time.

Stakelogic was already licensed for RNG casino games by the UKGC after gaining a license in Malta in 2016 and more recently in the Netherlands. The ISO 270001 Certified provider company launched its live dealer studios in Malta late last year, near the end of October, and has live streaming studios in Holland as well. Since launching the studios the firm has built up a portfolio of live games for online gamblers including blackjack, money wheels, roulette, and host-assisted live big board slots.

Stakleogic Live dedicated studios use HD cameras, state-of-the-art audio equipment, and the latest technology in streaming and broadcast to deliver around-the-clock action to players in nearly every regulated market.

Some of the more well-known operators who carry Stakelogic’s native language Dutch games include Unibet, Toto, Betcity, and Kansino.

In contrast to some live dealer game providers who offer bored dealers and croupiers that might barely acknowledge individual players getting in on the action – Stakelogic’s professionally trained staff at all locations interact with players throughout the course of play to make players feel like VIPs because the amount of money rolled-over on the tables is secondary to providing the most enjoyable experience possible for all players.

One of the innovations Stakelogic has brought to the live arena is an adaptation of their Super Stake feature that was initially launched for random number generated games. Gameplay is turbo-charged on select live games by letting players double their bets to up the chance of catching a bonus feature for potentially insane levels of winning. It’s the only enhancement of its type in the live dealer market.

The award of a UKGC license will allow Stakelogic to roll out its live game portfolio to players at big-name operators in the industry’s most stringently regulated jurisdiction. The Malta license will still cover players throughout Europe and beyond, except in specific markets such as the Netherlands and Romania that have their own robust regulatory frameworks. Players elsewhere will not enjoy the protections offered by Great Britain’s Gambling Commission. However, some super-names licensed there will now accept players from other locations.

Stakelogic has been supplying games to Unibet since early 2016.

Stakelogic CEO, Stephan van den Oetelaar said: “This is a pivotal milestone on our journey to becoming the leading provider of live casino content to operators in regulated markets around the world.

“The UK is often seen as the benchmark for regulation, so it is a testament to the quality of our games that we have secured the required approvals to enter the market and help operators take their live casino proposition to the next level.

“Our live dealer titles really are a cut above those of our rivals, allowing operators to strengthen their live casino offering with games that engage and entertain in equal measure. We have had great success in other regulated markets and expect the same in the UK.”

He also added: “I am incredibly proud of the entire Stakelogic Live team for working together to secure our UK Gambling Commission license. We believe this will be a major market for us and look forward to seeing players enjoy the compelling experience our live dealer titles provide.”