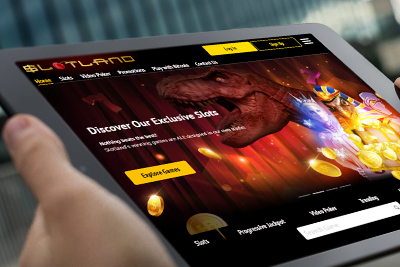 Slotland Online Casino, a favorite of American and other players since 1998 has paid out its biggest progressive jackpot ever. A player named Carol M. took down $339,386 while she was playing Alice in Wonderland. Slotland has been known for decades as one of the most consistently safe places for players in the USA or anywhere else to play and be paid.

Unlike most progressive jackpots at online casinos, the Slotland jackpot builds over a variety of machines and is symbol driven. Players need to study the paytables and find the games that give them the biggest bang for their buck as the minimum bet to qualify for the jackpot varies from game to game. Carol was either doubly lucky or she knew this “locals” trick because the minimum bet to qualify for the progressive is $5 on Alice.

Longtime Slotland manager, Michael Hilary explains: “With a progressive jackpot, some of every qualifying bet goes into the jackpot pool. The longer it takes for someone to hit the jackpot, the bigger it gets.

“Since our progressive jackpot is tied to so many games, it’s won quite frequently and seldom goes over $300,000. This is a historic win for us!”

According to a Thursday press release, “The scatter symbol in the Alice in Wonderland slot can trigger up to fifteen free spins with multipliers. The Mad Hatter can change other symbols by throwing his hat onto them, possibly creating new winning combinations. Tweedle Dee and Tweedle Dum are Wild and expand to cover the entire reel.”

Researching a little history on Slotland jackpots we find that it’s not just the slots that feed the jackpot – or that can win it – it is also connected to card-based games.

Without entering the current jackpot into the equation, Casino Listings’ Jackpot Tracker which has been following the progressive since 2010 shows that the progressive falls on average every 20 weeks now with an average win of $170,447 making Carol M.’s win not only the biggest ever but just about twice the average jackpot.

Looking back 10 years and a few months ago we see two jackpots fall within weeks of each other. Obviously, the first to be brought down was the largest, but the casino “reseeds” the pot at $50,000 every time it is won, so no winner can walk away unhappy.

The jackpot was won more frequently in the earliest days so it often paid less than the “current” average, but not always.

In 2012, Hilary spoke of the two-in-a-row lucky winners when he said: “On average, we’ve always gone six to eight weeks between big jackpot winners. None of us, least of all the winner, thought there’d be another jackpot win already!”

The so-far all-time biggest winner, Carol who has been playing slots there for the last few years told a customer service representative at Slotland: “I was sitting on the sofa, playing on my tablet with my kitty curled up on my lap. When I hit the jackpot, I jumped off the sofa and screamed so loud I almost gave my cat a heart attack!”

Hilary put up a special offer for new players and fairly recent depositors in the form of a couple of “Congrats to Carol” bonuses. The free chip and generous deposit bonus will be available until the last day of August and can be used to play any slots.

Slotland was one of the last online operators to give in to the pressures certain “bonus hunters” put on reliable operators but still offers some of the most “beatable” free chips out there for new players. Players who take the time to do some research on the operator can find the absolute best offers.