The San Francisco 49ers agreed to let Jimmy Garoppolo seek a trade after they installed Trey Lance as the future franchise quarterback. Bookies installed the Seattle Seahawks as the betting favorite at +300 odds to acquire Jimmy G in a trade with the 49ers, with the Houston Texans (+500), Cleveland Browns (+500), and New York Giants (+600) also contenders. 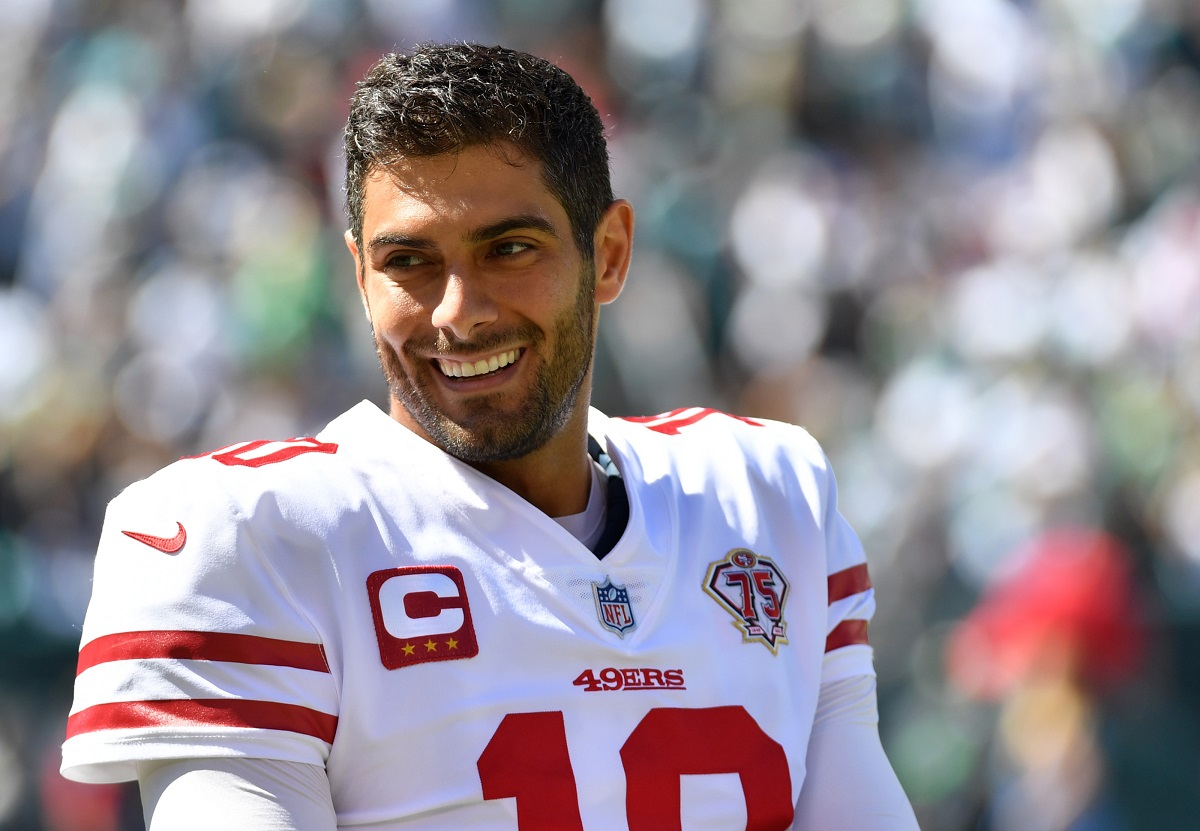 Jimmy Garoppolo from the San Francisco 49ers will soon join a new team in a trade. (Image: Eric Hartline/Getty)

Jimmy G underwent shoulder surgery when the season ended, which is why teams that needed a quarterback were not in a rush to add him in a trade.

The Tampa Bay Buccaneers at +800 odds stands out because Tim Brady unretired and returned to the Bucs. However, the Bucs interest in Jimmy G is solely as a backup and insurance policy if Tom Brady gets injured.

Earlier in the year, the Washington Commanders, Pittsburgh Steelers, and Carolina Panthers were favorites to add Jimmy G in a trade. Since then, the Steelers signed Mitch Trubisky, the Panthers acquired Baker Mayfield in a trade with the Cleveland Browns, and the Commanders added Carson Wentz.

The Seattle Seahawks sent Russell Wilson to the Denver Broncos in a trade, which surprised fans who expected Aaron Rodgers would become the next quarterback. Rodgers remained with the Packers and signed a ridiculous contract extension, so the Broncos went after Wilson. The Seahawks acquired Drew Lock in that blockbuster trade, and the front office said they would stick with Lock as the starter. Loyal Seahawks fans — the so-called 12th Man — were begging the team to upgrade their quarterback. Once Mayfield went to the Panthers in a trade, Jimmy G became the obvious favorite candidate.

Will the miserly Seahawks want to pay Jimmy G’s $24.2 million salary? Will the 49ers want to trade him to an NFC West rival? Despite those questions, the Seahawks are +300 odds favorites to score Jimmy G in a trade.

The Houston Texans desperately need a quarterback after they shipped out Deshaun Watson to the Cleveland Browns, which is Jimmy G is +500 odds to become their next QB.

The Cleveland Browns expect the NFL to suspend Watson for as much as half a season for his involvement in multiple sexual misconduct lawsuits. The Browns said they were cool with backup Jacoby Brissett as the starter, but Jimmy G is +500 odds to head to Cleveland.

The New York Giants finally cleared house and hired a new head coach and general manager via the Buffalo Bills. The Giants hinted they’d stick with Daniel Jones at quarterback during the last season of his initial rookie contract, but Jimmy G will give them a legit gunslinger and game manager. Jimmy G would thrive in the New York City media market and become an instant fan favorite, which is why he’s +600 odds to head to the Giants in a trade.