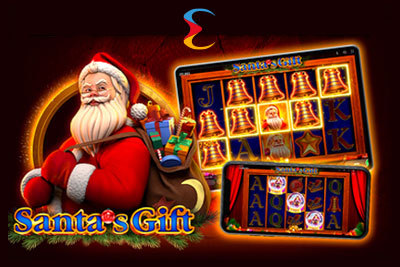 The holiday season brings plenty of opportunity to play online slots with new games released at an even faster rate than they are usually released. This year is no different with nearly all of the popular and up-and-coming studios pushing out holiday titles. Some are brand new, and others are simply popular slots repurposed for the season like the trio recently released by Inspired Entertainment.

Today we’ll look first at Endorphina’s new entry, Santa’s Gift, as well as Christmas titles from Armadillo Studios, Swintt, and Yggdrasil along with a sci-fi “pinball” title from Worldmatch (Cyber She) and TrueLab Games’ Sunstrike Supernova.

This game follows the basic Endorphina formula of a 5×3 reel set with 10 paylines. Cheerful symbols on the reels include a bell, Christmas ornaments, a golden star, a sleigh, and stocking stuffers in a bonus game.

Santa is the wild symbol and he appears stacked in the base game and during free spins.

Snowballs are the scatter symbols needed to trigger the bonus game featuring 8 free spins. All lower-paying symbols are removed from the reels during the bonus feature and the strips are repopulated with extra Gifts, Scatters, and Wilds. Win at least six Gifts to trigger another bonus game.

Collect all 15 Gifts during the bonus game to trigger multipliers up to 5,000x.

A gambling game will let you risk winnings to double up as many as 10 times for the brave of heart and luckiest among us.

The RTP will depend on which market your favorite operator is licensed in and whether they offer top returns. The best RTP possible from the maker is 96.02% on this 25 payline, 5×4 high volatility game. It’s our pick for the season so far.

This game features a 7×7 reel set and cluster pays. It’s another highly volatile Christmas game with a top prize of 7,000x bet. Look for a free spins feature and plenty of wild symbols connecting your wins.

This is a high-volatility game with 25 paylines on a 5×3 reel set. Features include a Gamble feature, Free spins, a Golden bet, Cascading reels, and a Doubling multiplier. Three scatters will award 7 free games which can be gambled for 10 and 13 free spins. Free games can’t be retriggered so gamble wisely. The RTP can range from 86% to 96% depending on the market.

While announced nearly a week ago, this non-holiday game is expected to be released on December 13th so keep an eye out for it. Another high volatility game, this 5×6 slot offers a 5,000x bet max win. Look for random multipliers, additive multipliers, the ability to up your bet for a better chance at the bonus, or even to buy the bonus feature outright.

Cyber She is simply an RNG version of pinball. The player will release the ball into action and then enjoy increasing wins with every bounce and bump. While no skill is needed to win the game it can feel like your luck is going to come through. Played in a portrait format it’s the perfect game to take along for one-handed play.