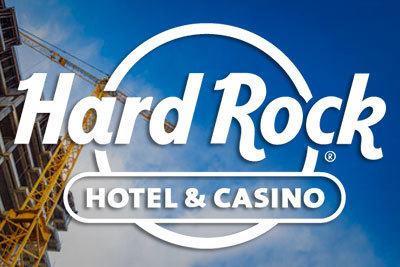 About three years after the Illinois legislature passed a bill approving Hard Rock Casino Rockford, the ground was broken last Wednesday by Hard Rock representatives and city officials in a much-anticipated ceremony.

The shovels were turned at the casino’s permanent location near the entrance of Interstate 90 on East State Street. The new permanent casino will replace the temporary, “Rockford Casino: A Hard Rock Opening Act”, on Bell School Rd by September 2023 according to some reports. However, the full build-out which will include a hotel in Phase II is still some three years away.

The 65,000-square-foot casino floor is expected to hold 1,500 slot machines and 55 gaming tables with dealer and croupier-assisted games like blackjack, roulette, and craps.

Additional amenities in the cards for the Hard Rock casino in Rockford include a Hard Rock Café, a 1,600-seat Hard Rock Live venue, a mix of 3 restaurants, and a 15,000-square-foot concert seating area.

In nearby Beloit, just 30 minutes away and across the Wisconsin border, the Ho-Chunk Nation is building a $405 million casino and some observers think the first to cross the finish line will enjoy a long-term greenfield advantage. The price tag for Hard Rock comes in at a little over $300 million.

President of the Rockford Area Convention and Visitors Bureau, John Groh, takes a wider, longer view and says that the casino’s location just off I-90 along with the Hard Rock brand will draw plenty of people to the city.

“Right now, the opening act is seeing visitation from beyond 90 miles and even across the country. We know that when the permanent casino is open, those numbers will increase. The pool, or area which people come from, will increase and be significant” he said.

According to a report in a local news outlet, MyStateline.com, Hard Rock Rockford president, Geno lafrate, said about 1,000 people will be employed at the casino.

Corporate Hard Rock (HRI) raised wages throughout the company beginning a week ago with hourly wages going up as much as $3.00 and salaried employees seeing as much as $5,000 extra over the course of a year.

lafrate wants his team to have a living wage and understands the importance of it.

“Maybe you could get a little bit better place to live, maybe you could provide better for your family, maybe you could buy a car and not be on public transportation anymore,” he said. “There’s a variety of reasons that it just made sense to do. And across the entire company, we’re spending $100 million dollars in voluntarily increasing our minimum starting wage throughout Hard Rock.”

Rockford Mayor Tom McNamara spoke of the impact the city’s relationship with Hard Rock already has. He spoke of more than 800 construction jobs, about the same number of full-time jobs, and mentioned that the average income of Hard Rock employees will be about $50,000 per year.