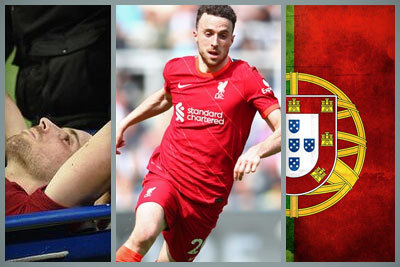 On Tuesday, October 18th, 2022 it was announced that Portugal’s star forward, Diogo Jota, will miss the entire 2022 World Cup in Qatar due to the calf muscle injury that Jota suffered versus Manchester City on Sunday, October 16th, 2022 in a club action match while playing for the Liverpool football club, according to the manager of Liverpool, Jurgen Klopp.

The Injury to Diogo Jota

Diogo had to be carted off of the pitch on a medical stretcher during the stoppage time of Liverpool’s 1 to 0 victory over Manchester City last Sunday. Upon further medical analysis, Jota sustained a quite serious calf muscle injury that will definitely and unfortunately keep him sidelined for Portugal’s national team during this year’s 2022 World Cup this fall which will be hosted by Qatar.

“It will be for a long time,” the head coach of the Liverpool football club, Jurgen Klopp, told the sports media outlets during a news conference regarding Diogo Jota’s anticipated absence from the upcoming 2022 World Cup tournament that starts in the host nation of Qatar in just 5 – weeks from now. “We talk about months, so we will see.

“He knew it when we carried him off the pitch. At that moment he knew already it was a serious one and it could be pretty impactful for his World Cup dreams.”

“After such a good night at Anfield, mine ended in the worst way! In the last minute one of my dreams collapsed,” the star forward for Liverpool and Portugal’s national team, Diogo Jota, posted on Twitter on Tuesday, October 18th, 2022. “I will be one more supporting from the outside, club, and country, and fighting to be back as soon as possible.”

Portugal and the 2022 World Cup

Jota was originally projected to be a starting forward for Portugal’s national football club that will be participating in the group stage of the 2022 World Cup against opponents that include Ghana, South Korea, as well as Uruguay.

Diogo has never had the opportunity to play at a World Cup so far in his professional football career, and Jota is obviously heartbroken that his life – long dream to play in a FIFA World Cup will unfortunately have to wait for at least another 4 – years when the next World Cup tournament is held.

The 2022 World Cup tournament is scheduled to begin on Sunday, November 20th, 2022, and the Portuguese national team will play their first match in Group H just 4 – days after that Sunday versus Ghana.

Unfortunately for Portugal, they also lost their winger, Pedro Neto, last week due to an ankle injury while Neto was on club duty playing for Wolverhampton. Pedro’s ankle injury will require a surgical procedure in order for his ankle to be repaired.

With the loss of both Jota as well as Neto, Portugal will have a much more difficult time competing for the 2022 World Cup championship title in Qatar this year. Portugal has played in a total of 8 World Cup competitions, and they have never won a World Cup since their very first World Cup appearance back in 1966. In fact, their best World Cup result was a third – place finish way back in 1966.