Ah … aggression in poker. Doesn’t it sound so sweet? It’s known as the most appealing of all poker styles. It’s what attracts viewers and makes people ooh and aah. What the vast majority of poker players (and poker viewers) don’t realize is that aggression is overrated.

This is why Daniel Negreanu said, “You know those players from 2010 and 2011 who always three-bet pre-flop?” He answered his own question with, “They’re all gone now.”

The tricky thing with poker, or anything else, is that playing by the book will only get you so far. It will not allow you to stand out from the crowd. You have to play you. Other people would phrase it as, you have to do you.

If you’re not sure what “you” is just think about how you react to people. Are you laid back? You confrontational? Are you sneaky? Are you something else? If you’re honest with yourself and apply that characteristic to the game of poker, you will find yourself with much improved results.

There are many different poker styles. Playing your own style will get you better results. All of this is good news, but there is one pattern in Texas Hold’em Poker Tournaments that tends to repeat itself, and it’s only something you would only notice if you played on the Circuit and knew the other players. When you’re in this world, you find out everything. I am going to share some of that knowledge with you, but without mentioning any names. However, please allow me to back up a moment. It will all come together, I promise.

A while back, I took a year off from poker to be a salesman for an energy company. I only did this because they told me I would be making all kinds of crazy money. In the back of my mind, it didn’t seem realistic to have the potential to earn $286,000 in my first year, but that lie was enough to motivate me.

After one year and just over $30,000 in earnings, I knew it was all nonsense. But that’s not what’s important here. What’s important is that this led to me quitting the energy gig and going back to poker with a clear head. I promised myself that I would go back as me, not as a poker player who played by the book.

Poker Styles: The Myth of Aggression 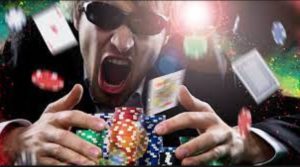 My first Texas Hold’em Poker Tournament on my return was a book signing event at a bar league in Savannah, Georgia. I got knocked out in the middle of the pack after making a psychotic hero call (this call helped me in Circuit events a few weeks later because it taught me not to be stupid). After the tournament, another player approached me and said, “I thought you would be more aggressive.”

That’s the problem. If I wanted to look cool to people who were buying my books, then I needed to be aggressive. Watching a professional poker player just sit there and fold most of the time seems as though it’s against the poker rules.

In short, aggressive players eventually go broke. Their names are out there because their aggression leads to some big cashes, but they also re-buy more than anyone else. This is why they’re always trying to land investors: they can’t afford to buy-in with their own money. So, don’t be fooled by big names. Not all of them are wealthy.

Playing TAG (Tight-Aggressive) is a whole different ballgame, and it’s absolutely the correct approach. By using this most effective of all poker styles, you establish a tight image, which means your opponents will respect your bets more. If they respect your bets more, they are less likely to call with middle pair, bottom pair, and draws. They are also less likely to call you in general, which means you will be able to get away with more bluffs and semi-bluffs.

Now let’s take a look at how you should play a poker hand against aggressive players in Texas Hold’em Poker Tournaments.

That aggressive poker player is controlling the table. He keeps raising pre-flop, which allows him to isolate. Then he either takes down the pot with a made hand or bluffs his opponent off the hand. You watch this player for a while and tell yourself it’s only a matter of time before he gets himself in trouble and loses all his chips.

That’s usually the case, but sometimes an aggressive player can last longer than you expect because he’s running good. When that happens, frustration begins to build in your mind because you start feeling helpless. You want to take a stand!

If you take that stand simply because you’re sick of it, you’re probably going to find yourself in a world of hurt. Whether your opponent realizes it or not, he’s using one of the most effective poker styles for getting his opponents on tilt. I’ll tell you exactly how to play against this aggressive type of poker player. 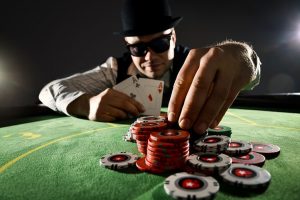 We’re talking about poker tournaments here, not cash games. This means that your aggressive opponent will be sitting at your table for hours. He won’t get up to eat for an hour and come back. By him being forced to sit there, it allows you to collect information on him prior to striking. Yes, this is a long-term game plan, but it works, and it’s what will separate you from the crowd.

Take a look at who this player is going after. Does he find certain players weak and wants to play more hands against those players? Or is he playing more pots when he has position?

If it’s the former and he’s not choosing to go up against you, just sit back and watch the show. If you are one of the players he’s attacking, then he finds you weak. DO NOT stand up to him! Do the complete opposite: make him think you’re weak. By taking this approach, when the blind levels increase and the pots are bigger and more important, continue to play passive pre-flop and flop (depending on flop structure) and string him along. Let him do the betting for you.

If he’s playing the poker position game, then he’s probably smarter than you think. In fact, he probably appears more aggressive than he is, but he’s also going to overvalue the button, cutoff, and hijack positions. You now know that he has a wider range in these spots, which means you can widen your range against him despite being out of position. If you play a wider range in this situation, be prepared to fold early. Remember, the first loss is the best loss, which means it’s the cheapest loss.

This is still a great way to combat that oh-so-popular of all poker styles. For example, if you raise with 7c5c from middle position when he’s on the button, he calls, and the flop comes: AJT-rainbow or a board with a similar texture, it’s an easy fold. If you hit two pair, you’re going to get paid because he will never see it coming.

If you flop a flush or straight draw, put pressure on him. You’ve been playing tight all day. He’s going to respect your bet. If he calls, so be it. You have outs. When it gets to the turn, fire again even if you missed and see how he responds. If you check the turn against a player like this, he will attack and you will lose the hand.

So many people have this wrong. They think it’s your job to attack when you have the chip lead at your table. Nothing could be further from the truth. You should protect your stack. Otherwise, those chips go quicker than they come. A lot of players don’t remember how difficult it was to acquire those chips.

There are exceptions. One is when you’re up against a short stack who goes all-in and you have a moderate-strong or strong hand. That’s a call in most situations, but it also depends on the player you’re up against. You see, understanding the player and their style gives you answers. When you have answers, the game becomes easier. It’s still very difficult, but at least it’s a little easier.

The other exception is when only one or two people have limped and you’re in position. This is a time to apply pressure. That said, DO NOT overvalue the button! Also don’t over-defend your big blind. Defend, yes. Over-defend, no. It’s okay to fold sometimes. It will keep you out of trouble. And stay the heck away from the small blind unless you’re very strong. Remember that the small blind turns into the worst position on the flop.

In general, you want to be extremely patient with a short stack. That is against conventional wisdom, but it’s also what will make you the most money. However, if you’re heads-up against an aggressive player, then you want to widen your range with your jams. Either he’s going to fold because he respects your image or he’s going to call and you’re likely ahead. If you’re not ahead, that’s okay. You’ve still got a chance. If you lose, at least you went out swinging.

Basically, only get aggressive vs. the aggressive player when you’re so short-stacked that your only move is to jam. In my opinion, this is 7 BB or less. Most players have it at 20 BB, but you can still play real poker with 10 BB.

Aggression is the most popular of all poker styles, but that doesn’t mean it’s the best of all poker styles. If you want to be profitable in poker tournaments, then sit back and enjoy the show. Fold more often. You will collect information on your opponents while establishing a tight image that you can use to your advantage when the blind levels increase.

Try to apply the poker rules discussed above for at least 10 poker tournaments and see how you do. If you remain patient, then you’re very likely to be a winner. See you at the WSOP!

What is a NIT in poker?

A Nit is someone who plays incredibly tight and never takes risks. They only bet with monsters and they never bluff.

How do you beat a tight poker player?

Since a tight player is risk-adverse, you bet more often against them whether you have it or not. You’re using their patience against them.

How do you become a tight aggressive poker player?

You fold a lot, but when you get involved you’re serious about it. This is an excellent way to get respect at the poker table.

What does LAG mean in poker?

LAG means a Loose Aggressive player. This means that they play a lot of hands and bluff often. You want to play tighter against this type of player and wait for the right spots.