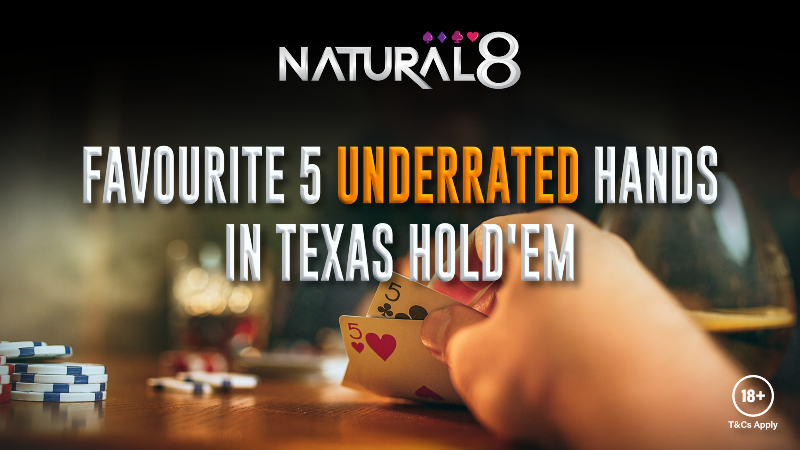 Everyone knows about pocket aces and suited connectors. However, when you only play certain types of hands, you tend to become predictable. Being predictable is not something that you want for yourself.

To help widen your hand range and avoid predictability, here are five of  favourite underrated hands in Texas Hold’em Poker.

The reason why we love Jack-Nine suited is become of its deceptiveness. As with all suited gappers, the J-9 suited can make both a straight and a flush. The straight in particular would be fairly well disguised. However, much of its value comes when you make two pairs.

This hand is definitely strong enough for you to raise with from the Lojack (three seats to the right of the button) and beyond. Furthermore, it’s a perfectly acceptable hand with which to defend your blinds.

Legend has it that TJ Cloutier flopped three straight flushes in a single calendar year while holding the J-9 of clubs!

The real value of the hand known as “High Five” is in its drawing potential. With the ace in hand, any flush you make will be the nuts. And, of course, any lower value cards will be appreciated, due to the possibility of a well-disguised straight.

A-5 is also a great hand with which to stack someone else with a pair of aces, should you make two pairs. Imagine a flop of A-T-5 when your opponent is holding A-K. Delightful.

Small pocket pairs are often enough to take down the pot unimproved. Particularly in short-handed or heads-up games. When playing in late position or against tight opponents, you can go to town with these holdings.

Look to open with any pocket pair from the button. At a tighter table, you can safely open with 8-8 through 4-4 from the Lojack position. However, don’t get carried away with small pairs in the early position.

Seven-four is not the best hand, but it is one of the most underrated hands. This particular holding can make an extremely well-hidden straight and is easy to ditch if you miss it.

You want to be playing 7-4 from a late position in order to control the number of chips going into the middle. Nobody wants to be contesting a massive pot with such a weak hand. But if there is no raise and you’re trying to pick up the blinds, these are good cards with which to steal. Get it through and you’re laughing. If not and the flop comes 5-6-3, or T-7-4, how can anyone possibly put you on such a big hand?

7-4 suited is not a terrible holding, even in the worst case scenario. All-in preflop against A-Ks, you’re still going to win 37% of the time. Even up against pocket rockets, you’re going to win 1 out of 5 times.

The 7-4 hand is sometimes known as “Double Down”. This is due to its strength in the game of blackjack, where any hand totalling 11 would be a good spot in which to double your bet.

Just like J-9 suited, most of the Q-8 suited hand’s strength comes from its drawing potential. It makes the third-best possible flush, as well as a straight flush. Even so, you must be a little more careful with the straight. A board of J-T-9 is excellent, but you could get your fingers burned when facing K-Q.

To be good at poker, you must learn how to utilize hands that others tend to ignore, as well the best time to use them. The best way to learn these is by playing against more opponents and more hands.

Sign up with Natural8 today and practice using the affordable multi-table tournaments and freerolls.

Natural8 is Asia’s largest online poker room and geared towards recreational players. A skin on the reputable GGPoker Network, Natural8 is fully licensed and authorised. Anyone can join for free, and there are no hidden fees. On top of the $120 million guaranteed prize pool for tournaments every month, Natural8 also offers players extra incentives in the form of monthly promotions and cashback programs.

There are plenty of promotions available for players new to Natural8, including the $8 Instant Deposit Bonus (with a minimum deposit of $10) as well as the First Deposit Bonus – where players can choose between a 200% match bonus (up to $1,000) or $100 in instant rewards. New user specials on Natural8 amount to a total of $1,608 – easily one of the best in the online poker scene.