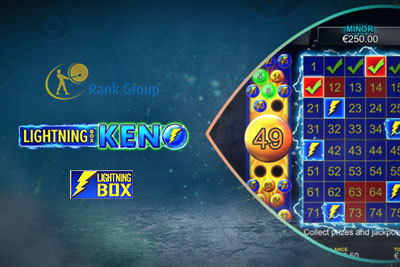 Lightning Box, now one of Light & Wonder’s in-house studios, has released its first table game with a bonus-enhanced keno title. The game makes its debut exclusively at Rank Group online casinos where it will enjoy a two-week run before being made available on Light & Wonder’s industry OPENGAMING™ platform for all customers.

Players will be presented with a grid of 80 possible number choices and can choose anywhere from three to ten numbers, determining their own volatility index as well as house edge or RTP. The random number generator then produces 20 numbers to be displayed on the grid. Players must match at least two numbers to log a win. A quick pick feature is available for players who don’t wish to choose their own numbers.

As the numbers are drawn, some of them can have the company’s signature lightning bolt symbol attached to them. Whenever six or more of these special numbers appear, a lightning bonus respin round is triggered.

Three respins will be unlocked and reels are made active at random. These too will be highlighted by lightning bolts. When an instant cash prize appears it is awarded and the respin count is reset to 3 respins again for even more potential to win.

Four jackpots can be awarded as well if they appear on the 2×2 or 3×3 colossal symbols that can appear on the reels. These too can reset the respin count to three when they land in an active (lightning bolt highlighted) reel. The jackpots are Mini, Minor, Major, and Grand jackpots.

Lightning Box Operations Manager, Michael Maokhamphiou said: “Keno is our first table game, and we are thrilled to couple the unique gameplay offered by this title with our player favorite mechanic lightning respin.

“Providing players with the bonus round found within popular titles like LIGHTNING GORILLA™ and LIGHTNING BLAZE™ in conjunction with the table gameplay of keno has produced a title with universal appeal that we are excited to see players reception.”

Rob Procter, VP of Game Development at Light & Wonder said: “Keno demonstrates Lightning Box’s flexibility to produce engaging and entertaining titles, with this being the first table game created by the studio. They have blended a traditional table game with the much-adored lightning respin mechanic that we are confident players will enjoy.”

Lightning Box is an advanced slots lab and studio launched in Australia in 2004 where the team spent most of its time on bespoke games for major providers such as Aristocrat and IGT. Prior to Scientific Games spinning off its lottery holdings and rebranding as Light & Wonder, the behemoth firm acquired Lighting Box in the summer of 2021.

Players and industry observers may not have noticed the acquisition as Lightning Box had maintained a long-standing relationship with its new parent company for several years, most notably through a robust distribution deal utilizing the former SG OpenGaming platform.