Like one of those lost-long missed connections, the Los Angeles Lakers are once again courting Buddy Hield. The latest rumors coming out of Tinsel Town suggest the Lakers are trying to work out a Hield trade with the Indiana Pacers. 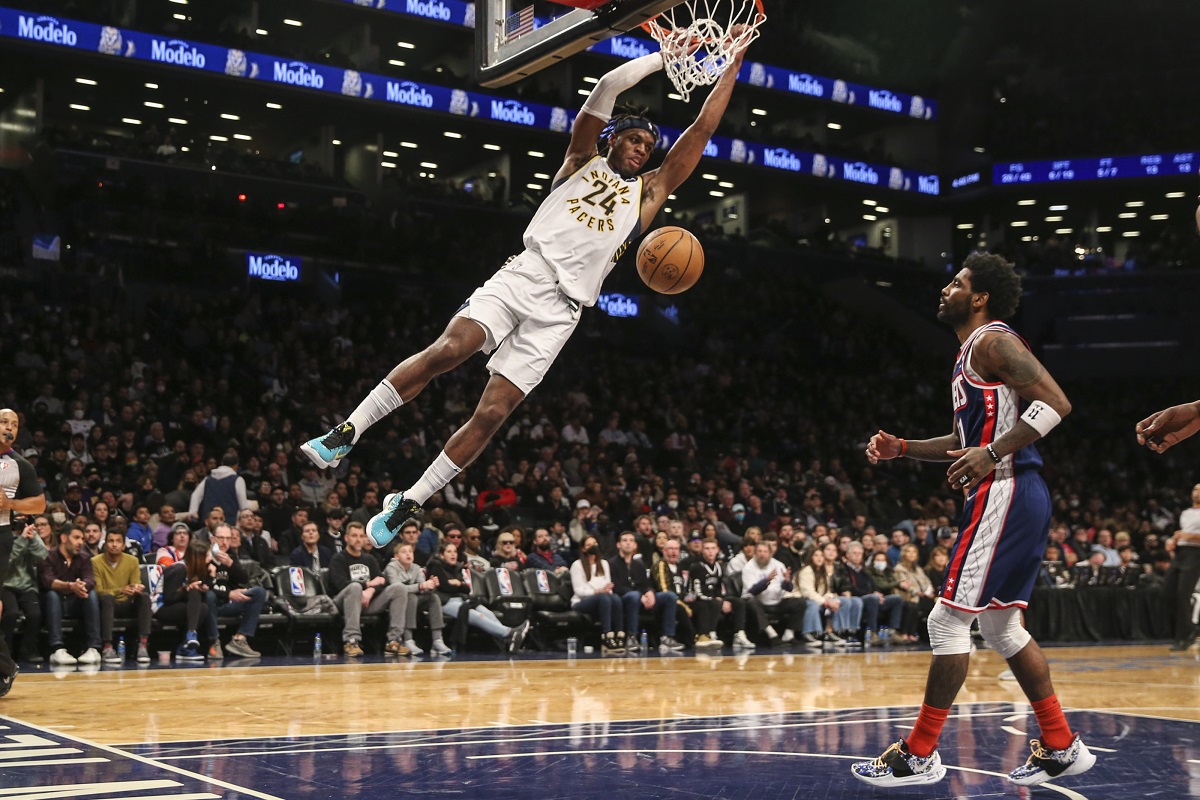 Buddy Hield from the Indiana Pacers throws down a dunk against the Brooklyn Nets. (Image: Wendell Cruz/USA Today Sports)

This is not the first time that the Lakers wanted to acquire Hield in a trade. And if it doesn’t work out this time with Indiana, it certainly won’t be the last. So long as LeBron James is with the Lakers, Hield will the one that got away.

Hield averages 15.9 ppg over his career while shooting nearly 40% from 3-point range. After he was traded from the Sacramento Kings to the Indiana Pacers last winter, Hield averaged 18.2 point, 5.1 rebounds, and 4.8 assists per game.

The Lakers are +1100 odds to win the 2023 NBA championship. Bookies moved the line from +2000 to +1100 a couple weeks ago when overzealous fans began hammering the Lakers to win the title due to rumors that they’d finally dump Russell Westbrook in a trade with the Brooklyn Nets for Kyrie Irving.

The Lakers and Sacramento Kings discussed a trade for Hield last summer, but for some odd reason the Lakers decided to gut most of the team and leverage the future for Westbrook. The trade with the Washington Wizards backfired and the disastrous Westbrook trade sent ripples through the cosmos. LeBron’s legacy soured. It got head coach Fran Vogel fired. Westbrook and his agent parted ways. It put general manager Rob Pelinka on the hotseat. It riled up the trolls on NBA Twitter. Owner Jeanie Buss was so irked, she resorted to boozy, late-night calls with her hippie, ex-boyfriend Phil Jackson to seek guidance, while tweeting about the ghost of Kobe Bryant. Heck, it even generated Anthony Davis trade rumors.

In another alternative timeline or parallel universe, the Lakers passed on Westbrook and pulled off a Hield trade with the Kings last summer. With Hield on the Lakers, they ended up with the #4 seed in the Western Conference and upset the Phoenix Suns in the conference semifinals to secure a date in the Western Conference Finals against the Golden State Warriors. LeBron vs Steph Curry is must-see TV and it doesn’t matter who won that match up, because network executives would’ve lost their minds at the potential ratings bonanza.

Alas, the Lakers acquired Westbrook in a trade instead of Heild, and the terrible decision sent the entire franchise into a tailspin. The HBO series about the Showtime Lakers (dubbed “Winning Time” to not confuse cable competition branding purposes) became a popular hit due to the simple fact the current batch of the Lakers were atrocious and hardcore fans were nostalgic for the golden 1980s when Magic Johnson and Kareem Abdul-Jabbar put their imprint on a new and exciting brand of basketball.

The Lakers took another shot at Hield prior to the trade deadline. At that point, everyone in LA-LA Land was desperate after the Westbrook trade was a mitigated disaster. Davis was hurt again, and the Lakers lost three games in a row in the end of January to sink three games below .500. Vogel’s head coaching job was on the hotseat as the team slowly imploded. LeBron was sweating Pelinka hard to make trades so they can ditch Westbrook and add a legit third-scoring option.

However, despite a non-existent trade market for Westbrook, Pelinka persisted. The Kings wanted much more for Hield than Pelinka could offer — which was Kendrick Nunn, Talen Horton-Tucker, and a couple of fast track passes to Disneyland. The Kings found a more serious trade partner in the Indiana Pacers, and they promptly swapped Hield and Tyrese Haliburton for All-Star Domantas Sabonis.

The Lakers failed to upgrade the team at the trade deadline. The rest of the season was like mangled wreck on the 405 where everyone slowed down to glimpse at the carnage. The Lakers were so bad that they failed to qualify for the Play-In Tournament. NBA Twitter began to amplify the hashtag #LosingTime as a nod to HBO’s “Winning Time.” Fans were trolling Westbrook by dubbing him “Westbrick.” Westbrook didn’t help his own cause when the pressure got to him; he shot even more airballs while viciously going after beat reporters to vent his own frustrations and shortcomings.

The Lakers finished the season 33-49. Vogel was made the scapegoat and Buss fired a guy who won them a title only two years earlier.

Fast forward five months. The Lakers failed to work out a deal with the Brooklyn Nets to swap their problem players: Westbrook for Irving. The Nets were not as desperate as the Lakers and held the upper hand in negotiations. They were in no rush to trade Irving (or Kevin Durant for that matter). The Nets sought first-round draft picks and wanted to dump Joe Harris’ $18 million contract to acquire Westbrook. The Lakers and Pelinka had to fold yet another losing hand.

Meanwhile, someone from the Lakers leaked a rumor about a Westbrook trade to the Utah Jazz that also involved Patrick Beverly. Of course, that was more hot air. Jazz presdient Danny Ainge emerged as the “Hustler of the Decade” after he fleeced the Minnesota Timberwolves for four first-round draft picks and five players to take Rudy Gobert off their hands. Ainge is currently trying to run a bluff against the New York Knicks while asking them for six first-round draft picks and multiple players for Donovan Mitchell. If NBA trade negotiations are like a high-stake poker game, then Ainge is crushing the tables. Ainge and the Jazz don’t need or want Westbrook.

After the Jazz quickly dismissed the Lakers, Pelinka made another shameful call to placate LeBron by trying to bring Hield to the City of Angels. Now, the Lakers and Pacers trade rumors involving Hield are gaining steam. Pelinka pitched Pacers’ GM Chad Buchanan another version of the Nunn and Horton-Tucker trade for Hield, while secretly hoping the Pacers would be foolish to take Westbrook and his $47 million contract.