Last postseason, three teams from the NFC West secured spots in the newly-expanded playoffs and the Los Angeles Rams ran the table to win Super Bowl 56. The Rams are the slightly betting favorite to win the NFC West at +125 odds ahead of the San Francisco 49ers at +150 odds and the Arizona Cardinals at +400. 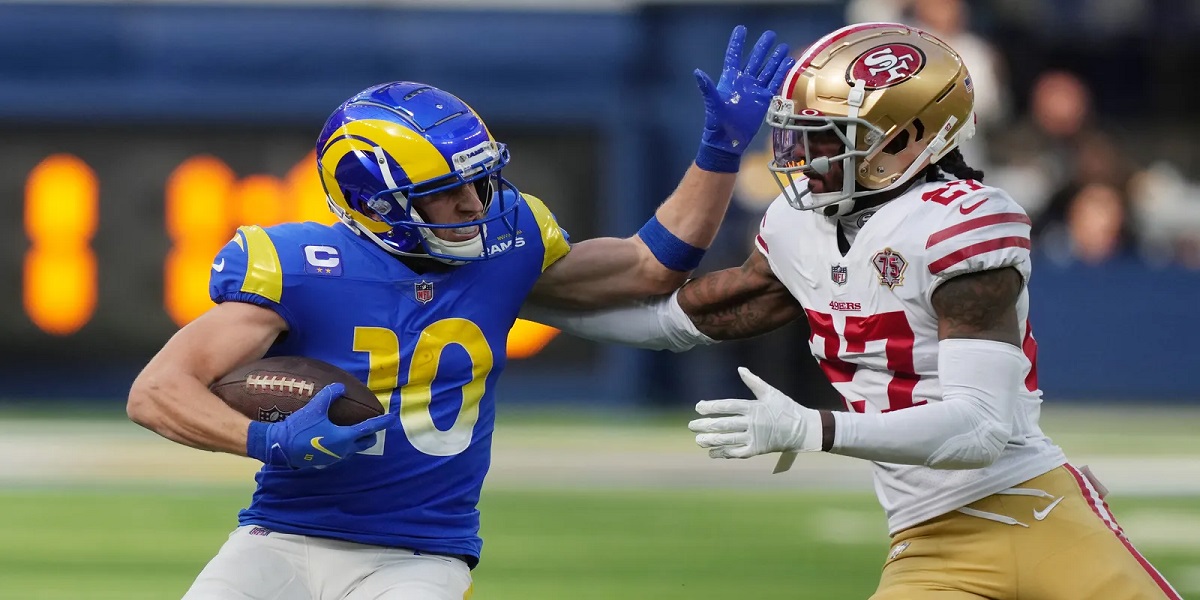 Cooper Kupp from the LA Rams evades a tackler from the San Francisco 49ers in the NFC Championship Game at SoFi Stadium. (Image: Getty)

We’ll see if the Rams are plagued with a Super Bowl Hangover to start the season. They’ll be facing a difficult schedule so it will be tough to match last season’s 12-5 record. The Rams have a tough stretch in November with road games against the Tampa Bay Bucs, New Orleans Saints, and Kansas City Chiefs. In the last four weeks of the season, the Rams have road games against the Green Bay Packers, LA Chargers, and Seattle Seahawks.

Okay, the Chargers game is not going to be a real road game since they both play in SoFi Stadium, but it sucks that the Rams have to face the AFC West this season and big games against Patrick Mahomes, Justin Herbert, and Russell Wilson. Yup, the Seahawks traded Wilson to the other conference, yet the Rams still have to play him on Christmas.

The Rams were able to retain their best offensive (Cooper Kupp) and defensive (Aaron Donald) players, so they have the proper roster to run it back. Newly added WR Allen Robinson has been getting huge raves, and he’s pumped to play with a real quarterback in Matthew Stafford.

The Rams are a popular pick +125 odds to win the NFC West even with their tough schedule because the 49ers might not have their offense up to snuff until the second half of their season.

The 49ers officially stated that Trey Lance will be their quarterback this season, and that Jimmy G’s days are numbered. The market for Jimmy G is rather thin heading into training camp, but quarterbacks go down in the preseason more often than you think. Lance will get a chance to run the offense from Week 1, but will he be ready?

In the first seven games, the 49ers face only two playoff squads from last season, which gives Lance an opportunity to ease into the starting role. However, October will be a huge test for Lance and the 49ers. They play the Rams twice and host the Kansas City Chiefs in Week 7. Five out of the 49ers first seven games are on the road, but then again the 49ers do not have the same fierce home-field advance at Levi Stadium in Santa Clara versus the old Candlestick Park days. They get rewarded with five consecutive home games after the bye week but it’s a tough stretch against the LA Chargers, Cardinals, New Orleans Saints, Miami Dolphins, and Tampa Bucs.

The 49ers are +150 odds to win the NFC West, but Lance is such a huge question mark that you’re gambling on whether or not how fast he’ll get comfortable running the offense, which is why the Rams seem like a better option.

The Cardinals worked out a contract extension with Kyler Murray and ended any drama between the two parties. The new contract is a doozy and critics thought it was ridiculous he’s getting paid on the same level as Mahomes. However there’s one red flag when word got out that the new contract stipulated mandatory film study hours. The greatest quarterbacks — Tom Brady, Drew Brees, Peyton Manning — never needed incentives to study film, it’s just what they did and part of their DNA. But in the case of Murray, the team would not include it in the contract if they felt he was not spending enough time in the film room.

The Cardinals have a strong enough team to qualify for the Wild Card, but an NFC West division title seems way too lofty of a goal. The Cards at +400 odds to win the NFC West seems accurately priced.

The Seahawks are not even a legit contender this year after they traded Russell Wilson to the Denver Broncos. By chance the Seahawks somehow end up with Jimmy G, then we can re-evaluate their divisional futures. But right now, it’s a battle between Drew Lock and Geno Smith for the starting quarterback job. Both quarterbacks were in the bottom tiers of The Athletic’s recent QB rankings article.

The cost-cutting Seahawks said they’re cool with Lock under center, but that’s just a foolish assertion. Smith is a stellar back up who can come off the bench in a pinch if someone gets hurt, but he’s not an every week option.

Expect a long and miserable season if you’re in the Pacific Northwest. The Seahawks are essentially a super long shot at +1800 odds to win the NFC West.