Another day, another victory for Wout van Aert and Jumbo-Visma. Jumbo-Visma won three stages in a row and van Aert secured his third stage win at the 2022 Tour de France with another impressive victory in Stage 20 individual time trial. 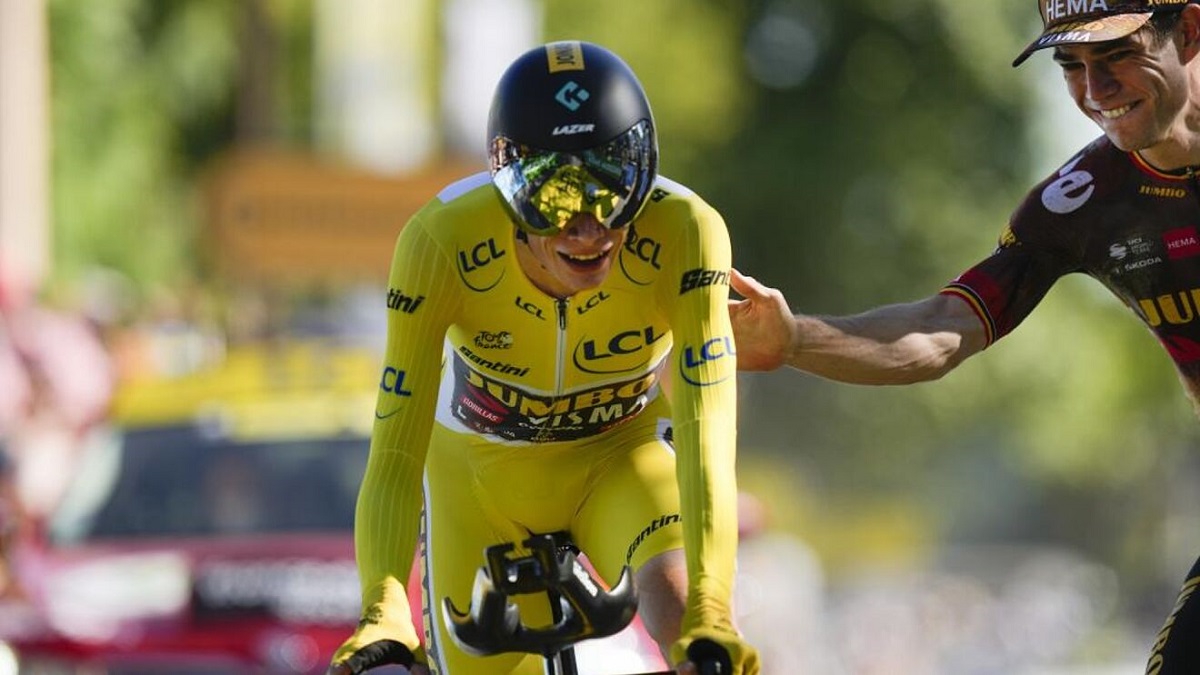 The next-to-last stage featured a 40.7 km individual time trial starting in Castelnau-Magnoac and ending in the medieval town of Cahors. It was the second of two ITTs this year, and the longest time trial in eight years.

Jonas Vingegaard (Jumbo-Visma) finished second in the time trial and got one more stage closer to an official victory in Paris on Sunday. Vingegaard – who had been in the yellow jersey since Stage 11 – had one goal in Stage 20: stay in the saddle and avoid a crash. He had a close shave, but didn’t back down with a second-place finish.

An incredible day for @JumboVismaRoad and an emotional one for 💚 @woutvanaert

With the Tour de France essentially determined, Stage 20 gave teams that were shut out a chance to win their first stage of Le Tour. Filippo Ganna (Ineos) is the world champion time trial specialist and he was one of the betting favorites to win Stage 20, but no one could match another insane effort from van Aert. He saved a little extra juice for the final two climbs and navigate the ITT course in 47:59.

“It was a really fast time trial, but you had to keep something left for the final 6 km with two hard climbs,” said van Aert. “Based my effort really well, I could accelerate in the final. And technically I didn’t make any mistakes, and it was a special setting coming to the top of this pretty village.”

Vingegaard was actually two seconds ahead of van Aert, but he eased off the pedals after he nearly bit it on the descent of Cote de Mages.

Van Aert was at the finish line in Rocamadour waiting for his teammate in yellow. The video feed caught van Aert fighting back tears as he returned to Jumbo-Visma’s team bus.

“I’m emotional,” said van Aert. Going into this Tour de France with this team is really special. Today was like a dream scenario. Jonas is such a strong guy, but especially such a good guy. I want to thank all my teammates and the whole team for this special three weeks. It’s unbelievable.”

The Tour de France jury had an unanimous vote and awarded van Aert with the “super-combatif” award for most combative ride at Le Tour. He won a special jersey and €20,000 in cash.

The final stage heading into Paris is a festive affair and celebration. Fans will line up at the crack of dawn to catch a perfect viewing spot of the peloton barreling down the iconic Champs-Elysees. Stage 21 is a mellow 115.6 km ride through the streets of Paris with the finish line at the Champs-Elysees.

This is considered a flat stage and it’s the last chance for sprinters to secure a stage victory. For teams without a win, they’ll be eager to stage hunt. Even though van Aert won three stages, he’s a stone-cold cannibal and will attempt a fourth stage win and back-to-back victories.

Jasper Philipsen (Alpecin-Deceuninck) will be one of the betting favorites, along with van Aert.

There was no change in the top four in the GC standings and Vingegaard will win his first-ever Tour de France while preventing Pogacar for winning three in a row. 2018 champion Geraint Thomas will finish Le Tour with a third-place finish on the third step on the final podium to cap off an impressive three weeks of racing.

Aleksandr Vlasov (Bora-Hansgrohe) moved into the Top 5 in the GC with a strong performance in Stage 20, and Nairo Quintana (Arkea-Samsic) slipped to sixth overall.

Check out our coverage of the 2022 Tour de France.