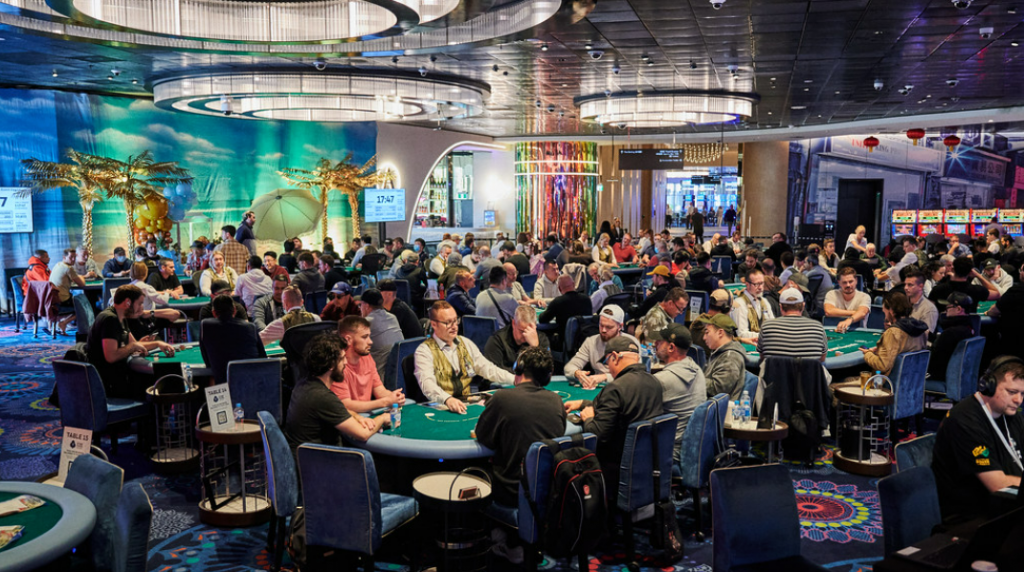 The World Poker Tour wrapped up an incredibly fun and successful first ever Australia Main Tour, which ran from September 15 to 27 at The Star Gold Coast. Over the 13 days, the festivities brought in a flood of enthusiasts from all around the country, which included highly decorated local superstars Joe Hachem and Hari Varma. WPT brand ambassadors Brad Owen and Andrew Neeme were also in attendance entertaining and accommodating players at the sold out Meet Up Game. Throughout the series, players battled for the unique WPT Boomerang trophies. Emerging the biggest winner was David Tang who clinched the Main Event to have his name etched in the Mike Sexton WPT Champions Cup. Other impressive winners were Joseph Sandaev whose top notch results earned him the Player of the Festival title, and Marley Wynter, the Super High Roller champion. We’ve got those results and other highlights below.

Unexpected celebrations for Australia’s David Tang who emerged victorious at the festival’s premier tournament. In an interview with WPT, champion Tang initially intended to skip the WPT Australia Main Event but due to his non-refundable airline tickets, Tang stayed, and five days later, his name became the newest addition on the Mike Sexton WPT Champions Cup. This was Tang’s first major success bringing him a massive A$ 647,470 (~US$ 429,080) in winnings – inclusive of a WPT Championship package and a ticket worth US$ 10,400. 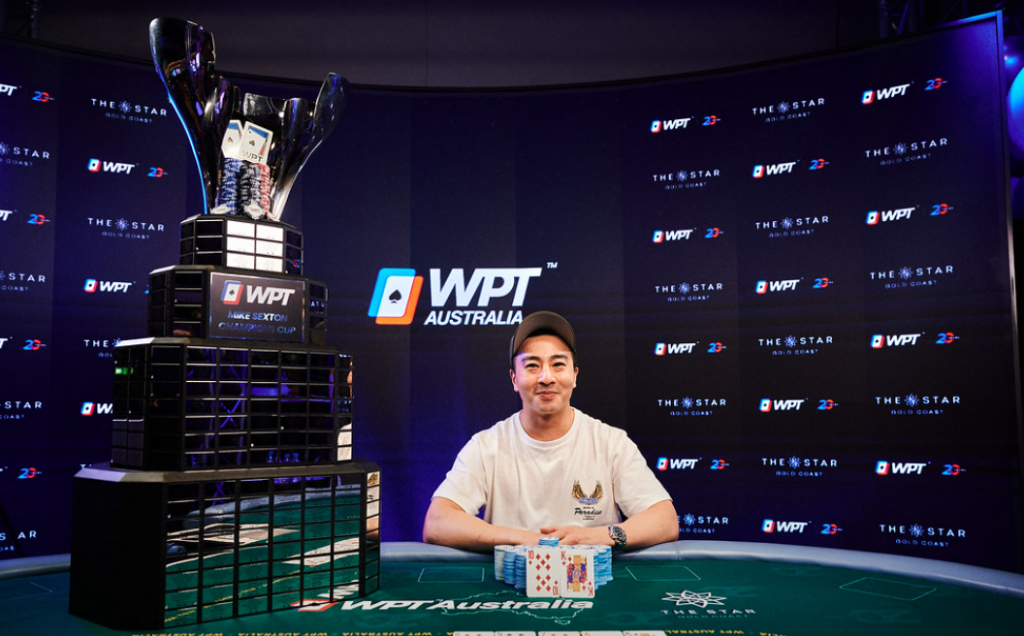 Tang trailed the leaders throughout every stage but rose above when it mattered. On the first hand of heads up, Tang doubled up to amass a 5:1 chip advantage then quickly closed it out on the second hand. Tang’s King-Ten suited diamonds completed a flush to dust Ace-Eight suited clubs.  He became the third Australian to be etched in the champions cup, joining fellow winners Joe Hachem and Mel Judah.

The Main Event saw 710 runners pony up the A$ 5,400 buy in to build a prize pool of A$ 3,550,000 (~US$ 2,362,580). Among the many well known figures in attendance were WSOP bracelet holders Joe Hachem, Gary Benson, Robert Campbell, Hun Wei Lee, Motoyoshi Okamura, WPT Prime Vietnam Player of the Festival winner Duy Ho who redeemed his $5,000 WPT Main Tour passport, Alex Lynskey, Sean Ragozzini, Luke Martinelli, and flying in from the Philippines, high roller Florencio Campomanes. 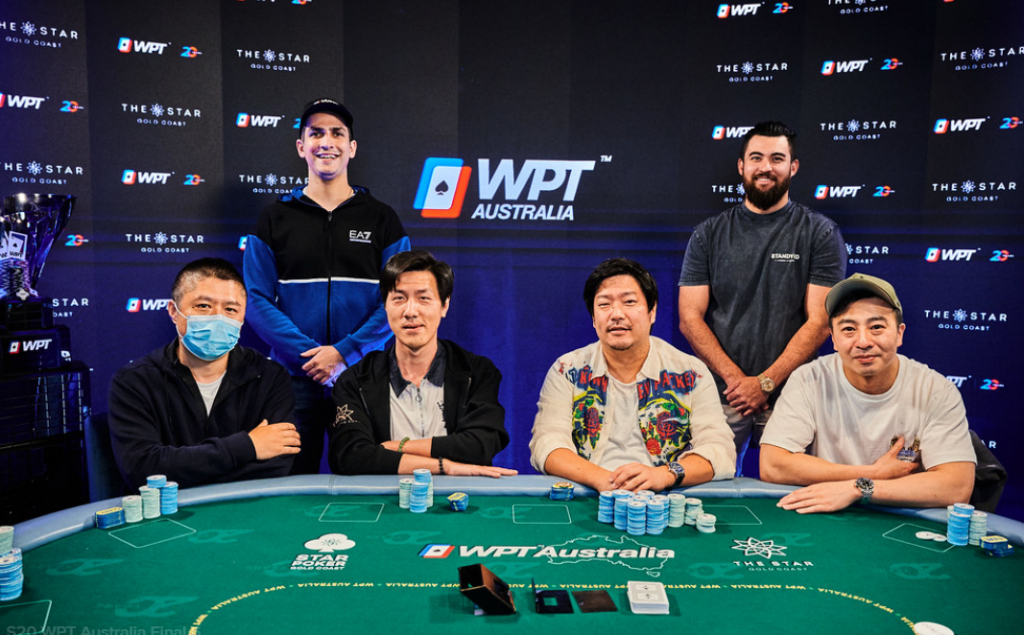 Big results for Joseph Sandaev earn him Player of the Festival

Without question, Australia’s Joseph Sandaev delivered the most incredible performance with four final tables reached, turning two into triumphs, to seize the esteemed Player of the Festival title. 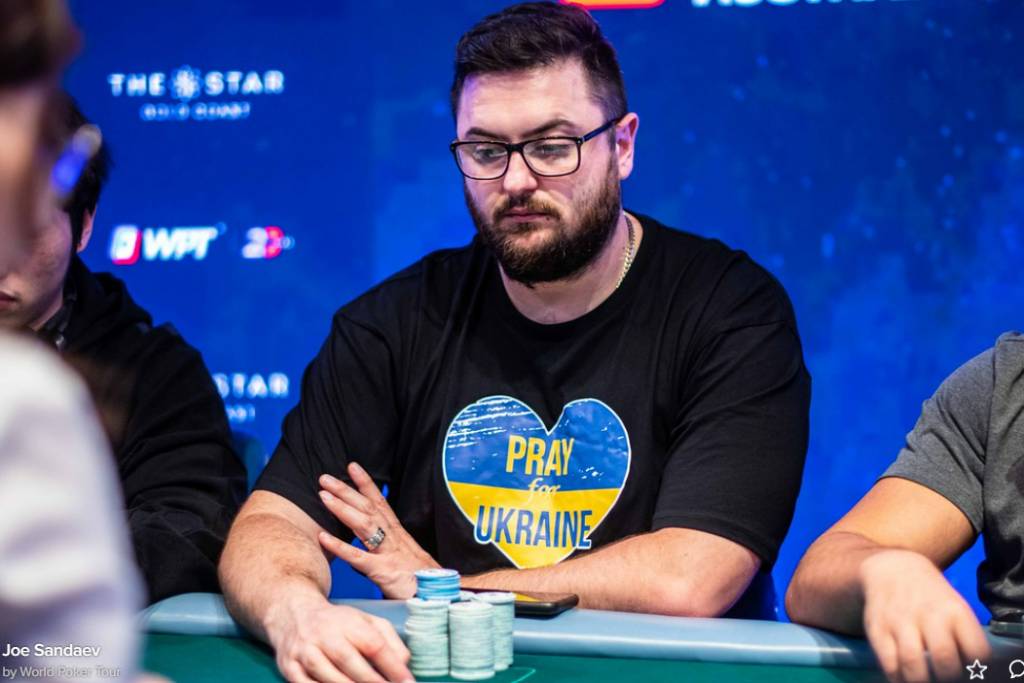 During the opening days, Sandaev quickly made his presence known with a first ever career victory at the A$ 2,500 No Limit Hold’em 8-Max. As the days progressed, he meant business, running deep at two Pot Limit Omaha events. He finished 7th and 4th to climb to the top of the POF leaderboard. On the final day, it was a solid takedown after he closed out the two-day High Roller event. Sandaev walked away with two event trophies, a WPT POF trophy, A$ 433,190 (~US$ 285,420) in cash, and the coveted WPT Main Tour passport worth $5,000.

The No Limit Hold’em 20th Anniversary Super High Roller clearly separated the heavy hitters from the masses with buy in at a jaw dropping A$ 20,000 (~US$ 12,800). This drew a healthy field of 63 runners for a prize pool of A$ 1,197,000 (~US$ 797,681). One of the newest faces in the Australian crowd was Filipino-American James Mendoza who  emerged the biggest earner at the recent 2022 APPT Philippines. Mendoza went on to cash in 5th place. Capturing the win was Australia’s Marley Wynter who overcame the heavily decorated tournament pro Khac-TrungTran at heads up. This was Wynter’s first ever victory and a career high A$ 430,919 (~US$ 287,165). 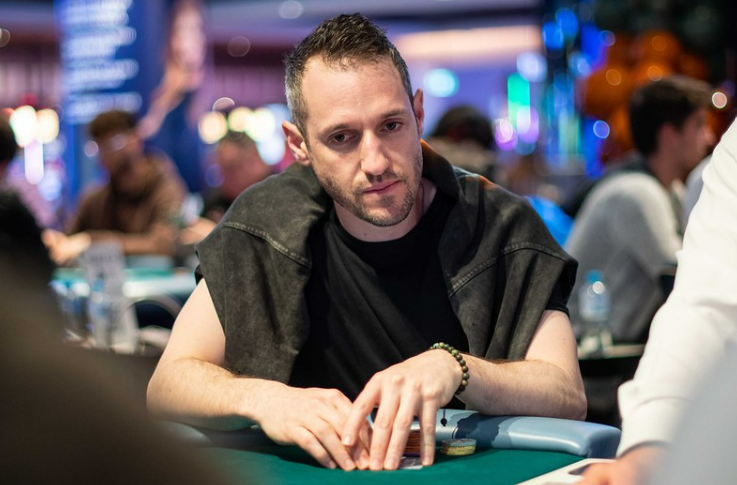 One of the most popular freezeout tournaments was the Shane Warne One Dayer charity event –  in tribute to the late Australian cricketer – with 477 players pouring in to turn it into a two-day affair. In the aftermath, well known Sydney pro Chad Awerbuch outlasted the competition, defeating Na Segon at heads up for a payout of A$ 47,213 (~US$ 31,460).