What is Expected Value in Poker?

How many times have you played a sure thing only to lose it all? If you’re like most players, it’s happened more often than you’d like to admit. You might know all the poker rules and the poker strategies, but that doesn’t mean that poker’s going to be a consistent game for you. While the poker odds might be tilted in one way or another, that’s all they are – tilted.

The unexpected is going to continue to happen and you’re going to lose individual poker hands no matter what. Instead of focusing on that, your goal should be to focus on those actions that have a better chance to make you a profit in the long run. This means concentrating on making plays that have a positive expected value.

Expected value is more or less what it sounds like. It’s the idea that in any situation, there is an equal chance of one of two outcomes occurring. Your goal as a poker player is to work those odds so that a given situation is more likely to end with the positive expected value result rather than the negative expected value. 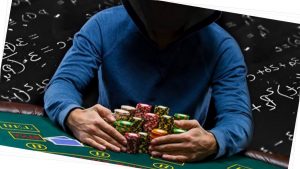 Expected value falls into three major categories – positive, neutral, and negative. You’ll want to know how each works in order to better understand your own play style. Positive expected value (usually styled +EV) refers to those behaviors that are more likely to make you money over time. These behaviors might not win you every hand, but they should bring you wins more often than they bring losses. These are the so-called “smart” plays that tend to separate the professionals from the amateurs.

Neutral expected value, or simply EV, is a behavior that could lead to one of two possible outcomes. While EV doesn’t necessarily bring with it the theoretical long-term success of +EV, it can still be incredibly useful. EV choices are often those that rely upon the most fickle element in poker – luck.

Finally, there’s negative expected value (-EV). These are the plays that are going to end up losing you money over time. In theory, though, these aren’t always ‘bad’ plays – these are simply choices that have a better chance of causing problems than winning. It’s not uncommon to see a -EV play work successfully in isolation, but it’s rare to see this type of play style work for anyone in the long run.

Playing Poker for the “Long Term”

When talking about expected value, it’s important to note that the conversation is always talking about your game in aggregate rather than in an individual instance. In fact, one of the real problems of understanding why making +EV plays is so important is that it requires playing a lot of poker to see the results.

If you’ve ever experimented with flipping coins, you know that you’re only going to see the 50/50 split when you flip dozens of times – and you’re going to run into virtually the same thing with poker. It’s only when you expand the sample size to encompass an entire career that you’ll see the efficacy of this type of strategy actually work.

If you’re looking at expected value plays, what you’re really concerned with what’s more likely to happen than not. You’re essentially looking for a poker strategy that would end up bringing positive results if you were to view every play ever made, not necessarily the handful of times you might sit down to the table. It’s often a good idea to stop and think about just how truly random poker games can be in order to understand how you need to view this strategy.

Ask yourself a simple question – what’s going to win in a poker hand, a pair of aces or a pair of kings? If you’re looking at things in a vacuum, you know that the aces are going to win. When you play poker, though, you won’t know exactly what those pocket aces are going to do. While it’s certainly more likely that the pocket aces take the pot than the pocket kings, there’s always a chance that the kings could win in an individual instance.

Your job as a player, though, is to try to use the information available to push towards the results that are most likely. You would always push forward with the aces over the kings not because the kings can’t win, but because the aces are more likely to win more often.

Getting the Most Value Out of Poker Hands 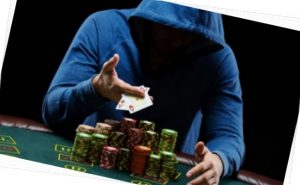 When we’re looking at expected value, we’re looking at trying to get the most value out of every hand we play. Does this mean that you’re going to win every time? No. It means that you’re trying to set up a situation in which you are more likely to win when you’re behind and – just as importantly – that you’re going to lose less when you’re already winning. EV is going to help you figure out when to play it safe, when to take a run at other players, and how to look at the numbers in order to determine your strategy.

A good way to look at how expected value can be important is to look at a single hand. As such, it’s good to illustrate the issue with a theoretical game. In this case, let’s say that your hand is in a No-Limit Hold’em Tournament with a 25/50 blind. You and your most problematic opponent are tied up with 5,000 chips and you’re looking for what to do next. This is how play should proceed:

You’re going to start with what you already know about the other player. In this case, your theoretical opponent likes to play suited cards and he tends to chase after draws. Let’s say that the big blind stays in, the small blind completes, and that everyone else involved checks around. You are sitting with a 8c and a 8h.

In our theoretical flop, the cards a Qh, 8s, 3s. Everyone else checks around.

What do you do?

You’re already sitting pretty with three of a kind, which is a great position. Do you need to worry about the theoretical flush that could be out on the table? Do you need to try to bully other players out before it can come to fruition? No, that’s a bad poker strategy. A negative EV proposition would be to look at the unlikely possibility of a flush and over bet, trying to secure the pot. This actually hurts you in terms of the money you could make when playing poker, hurting your long-term earnings and ruining your strategy. Instead, your goals should be to bet as much as you think you can to keep others interested in the hand.

A fair bit of this comes down to math. Getting that flush off the next card is a four to one chance. Increasing the pot by around twenty-five percent is only going to make the odds 5-1, which is a great play for them and something that’s a negative EV proposition for you. Instead, you’re going to push for a bet closer to the pot size and skewing the odds.

In this case, let’s say you bet about half the pot and put your opponent who likes to chase in a position to call. You’ll move on to the turn.

Our card on the turn is a Jc. Your opponent will, upon seeing the turn, check. So, what’s your move?

Right now you’re looking to maximize your value. What do you know from the cards in play and your opponents betting behavior? Your opponent played it safe, so he probably doesn’t have a Q. They might be working on a straight, but it’s more likely that his hand has a pair of spades – and probably even connectors. In fact, there’s a chance that your opponent could be sitting on the Queen and Jack of spades. That’s enough to keep him from folding, so your goal is to try to maximize your expected value against a number of possible hands. Again, you’re going to bet somewhere around the size of the pot and your opponent will probably call.

If your opponent was working on that flush, he has it. That’s great, but you also have a full house. Your opponent is probably going to bet big – somewhere around fifty percent of what’s currently in the pot. As a skilled player, that lets you know that he probably has the flush – if he had the Q earlier, his actions probably would have been different.

Your question now isn’t how to win, because you’ve probably already done that. Your goal is to maximize your value, and that means using a poker strategy that gets the most from your opponent. Don’t make the novice mistake of betting small – you’re going to end up a poorer result if that’s your choice.

What you know now is that you have a player who chased down that draw. That means he’s probably not going to fold when he gets what he wants. After all, there’s ego working here and it’s time to make a statement. This is when you’re going to want to wait a few moments and to go all in, something that’s going to make your opponent think you’ve got a Q. Your +EV play is going to get you an amazing pot so long as the other player followed the most likely script.

One of the truths of Texas Hold’em Poker is that you can’t actually control the outcome of any single hand. There are simply too many variables at play for you to truly control things at a micro-level, so making the assumption that you can win every poker hand is something that’s going to leave you frustrated and ultimately unsuccessful. Instead, your goal should be to try to create situations that will ultimately leave you with a positive expected value. Don’t Just Focus on the Results.

Yes, luck absolutely plays a role in how your game turns out. Sometimes, luck will be in your favor and you’ll win a hand that you shouldn’t win. Other times you’ll find yourself losing when you have what should be a sure thing. The only way to reduce the impact of luck over the long run is to continually make decisions that have a positive expected value. This will not only help you to win poker tournaments more often, but it will help you to better understand what you should expect from the game.

Next time you see a player making a bad play and walking away with money, make sure that you remember that you’re playing the long game – and that if he continues to play poker, you’re going to walk away with all of his money in the future. See you at the WSOP!
♠ pokerjournal.org

What is expected value in poker?

Expected value is the average return on each dollar invested into a pot. If you’re consistently making +EV plays, you’re a winning player.

What does the expected value tell us?

As stated above, if you continuously make +EV plays, then it tells you will be a winning poker player. It also tells us that smart situational play makes poker a beatable game.

How do you calculate expected value in poker?

It’s not really a calculation. It’s more situational awareness. For example, raising with 64-off from early position is -EV.

What is expected value decision making in poker?

Always knowing if the play you’re making works more times than not. For example, open-raising with KK on the button is +EV.