Success or failure at the game of poker is contingent on the cards, the individual players, and the interactions between every player at the table. To the trained eye, players unconsciously send out clues through their physical reactions to the luck of their draw. These reactions are known as poker “tells”.

As one gains experience playing the game, they realize that these reactions by other players can be clear indicators as to the strength or weakness of their hands, and whether or not they might be bluffing. This advantage plays out as the more experienced players know when to raise, call or fold based upon the poker tells of the other players. Since poker tells are unconscious actions, there is a strong degree of reliability that they do or do not have a strong hand.

These days, it is relatively common practice to see the professional players wearing tinted glasses when they play in Texas Hold’em poker tournaments. This is because they are aware of their own poker tells, and don’t want to give their opponent the advantage of seeing their eyes. 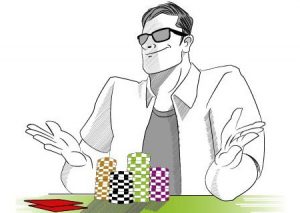 Poker tells are useful when playing live poker and also online poker. They are not something that you learn to read overnight. They are something that with practice, they will become easier to read over time. It is important to remember, however, that the more experienced the player, the more likely they are to bluff. Basically, there are two types of poker tells.

Poker tells can either come with physical actions or through betting patterns. The most dependable of these is how the opposing player bets. There are certain ways that a player will bet when they have a good hand as opposed to a bad hand. These patterns are the primary tell to pay attention to and can tell you whether to raise, check, or fold your own bet.

Physical poker tells take some practice to read. They are usually not as obvious as those depicted in movies. They can be very subtle, easy to miss even. The more experienced the player, the more conscious they are of ones tells. Once you realize the behaviors of the other players and make the connection between good hands and bad, poker becomes even more fun.

Thanks to tells, poker strategy takes on an aspect of deception. The most experienced players can send false tells to the competition. Of course, the most difficult opponent is the one who appears to have no tells at all. While it would be nice if it was easy to read tells on your opponents, it can definitely be quite a challenge.

How To Spot Poker Tells

The first step to learning how to spot poker tells is to learn to observe details. No two opponents will be the same. For some, it is hand movements. For others, it could be eye contact. Still others will project general behaviors that will communicate the strength of their hands.

As you learn to observe, you will note that the most reliable poker tells are often the initial response to their cards or to the flop. Sometimes it is a fleeting movement or look, or it could be far more dramatic. If a poker tell is something that seems to be more drawn out or too purposeful, chances are that it is a false tell purposely put out to confuse the competition.

Fact is that if the player is showing strength, then they are usually holding a weak poker hand or bluffing, while if a player appears to be weak or confused, that usually denotes a strong hand.

Over time, and as you play in more poker games, you will learn to work through what poker tells are really there. Learning poker tells can be a lot of fun and are an essential part of any poker strategy. You will ultimately notice that there are some pretty common poker tells. No two opponents will ever be the same though, so stay sharp in your observing your opponents playing style. 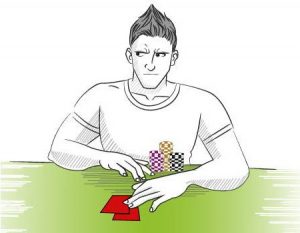 Poker tells can start before the first hand is even dealt. Observe how the players buy their chips. Are they confident enough for a full rack or do they just buy a short one? Are they loud and ostentatious or are they conservative and quiet? Do they handle their chip stacks like they know what they are doing or are they tentative? These small habits can give you some idea about what kind of player they are. It is important to remember that poker tells can be both actions as well as inactions.

The conservative and quiet one is the one you should look out for. They will be the ones handle their chip stacks like they know what they are doing because they do. The loud and obnoxious one will probably have the most visible poker tells during the game and they will also more than likely lose.

Poker tells differ from player to player though, and no two poker players are alike. A poker tell that means that one has a strong hand can mean the exact opposite for another. Some poker tells are so subtle that you might miss them at first unless you are incredibly observant. Many of the common poker tells will communicate that the person is an obvious beginner.

Although poker tells do vary from person to person, generally speaking, these tells may indicate a strong hand:

The player has their chips in their hand and is observing how much are in everyone else’s chip stacks. This would be for someone who is usually quite laid back during the game.
The player seems nervous.
The player pays more attention to the other players at the flop instead of looking at the flop itself. This means that they are looking for everyone else’s reactions to the flop.
The player seems disinterested.
Big natural smile.
The player’s eyes become dilated. This signifies excitement and is not something that can be faked.
If their face becomes red and you can see a vein throbbing in their neck or forehead. This means that their blood pressure just went up.
The player draws in a sharp breath and continues to breathe rapidly it usually means that they are excited about their hand and ready for some action.
If the player seems relaxed, sitting back in their chair.
The player seems impatient like they can’t wait to bet.
The normally relaxed player sits up straight and seems more attentive.
Change in facial expressions, such as flexing their cheek muscles, raising their eyebrows.
Protecting their hold cards more than they usually do.
If they exude confidence through fluid speech, quietly moving their chips into the pot, they are usually confident that they will win the pot.
The player’s hands tremble, which is usually a sign of stress releasing.

Conversely, poker tells that may indicate a weak hand can include:

If they bite their lip, licks their lips, or look like their upper lip stiffens.
If they start blinking rapidly, roll their eyes, squint, or cover their eyes.
They seem to hug themselves or rub their hands, arms, legs, as if they are trying to comfort themselves.
Running their fingers through their hair.
Fake smile as opposed to a natural one.
Checking their hole cards after the flop or if they treat their hole cards carelessly.
If their speech patterns become slower, broken or incoherent, or forced and unnatural.
Seeming inattentive or starting off into space.
Biting their nails or wringing their hands until their knuckles whiten.

While these are the poker tells themselves, there are fundamentals to reading tells that you will need to consider. 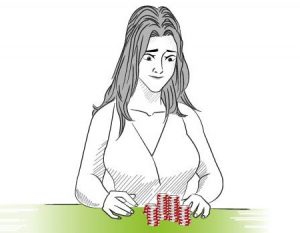 As you gain experience and become a better poker player, reading poker tells will come more easily to you. It is an art that takes practice. With time, you will begin to be able to see what is natural during a game. How do the other players place their bets? Do they seem relaxed all the time?

If a player is a beginner, they won’t be practiced enough to bluff successfully. They are still learning the game and are more focused on getting things right than they are with how everyone else is playing. Any tells that they send should be pretty obvious.

If you are playing poker online, the physical tells won’t apply. Their tells will come more with their betting patterns. Betting quickly at times and taking longer before they call can be significant. However, taking time before they bet could mean something entirely different, like getting up to let the dog out, or maybe they are doing something separate while playing poker like watching TV, reading, talking to someone else in the room or they could just be playing multiple poker games online.

Since picking up poker tells is not a natural phenomenon, you will need to practice whenever you play. Observing one or two players at a table is more effective than trying to observe everyone at the same time. The best time to do this is when they are focused on their hands and not on anything else going on at the table. You can learn a great deal during a showdown. Watching how players behave when everyone else at the table has folded and it is down to the two betting players in a showdown can bring you a lot of information.

Don’t ever underestimate the importance of poker tells, but at the same time, don’t spend too much time trying to learn them either. Some tells will be obvious while others will be far more subtle. As you learn more about strategy, rules, and the game of poker in general, you will be more naturally able to notice some behaviors in the opposition. You will be better off trying to put opposing players into broader categories, such as beginner as opposed to an expert, than you will be focusing on idiosyncrasies from the different players.

If you want to improve your poker game, focus more on the betting patterns of the other players at the table. Also, see if you can pick up on the playing styles. This is a lot easier when you play in informal games than if you are in a tournament. Never assume that there are beginners if you are in poker tournaments.

One last thing is that poker tells are not something that happens with every hand. They may be rare, or they may be consistent, but you will never see them constantly. The practice of reading tells is not something that will make a huge difference in how much money you can make during individual games. The practice will pay off more as you become more profitable over time.

Poker, as a game, is about skill almost as much as it is about luck. Learn what you can, when you can, but in general look at it like this. Poker is still a game, so whether you play professionally or casually, remember to at least try and have fun playing it. See you at the WSOP!

What does it mean when someone has a tell?

It means they are giving away information about their hand with their actions. This could be something physical or a betting pattern.

How can you spot a poker tell?

It’s something you pick up after playing a lot. For example, if someone is very stiff with their speech/actions, it’s likely a bluff. If their hands are shaking, it’s not a bluff.

How can you tell if someone is bluffing in poker?

Every player is different when it comes to physical tells. With betting patterns, ask yourself if their story makes sense.

How do win at poker every time?

I do not win at poker every time, nobody does. The goal is to minimize risk and maximize profits, and minimizing risk plays a huge role in profitability.