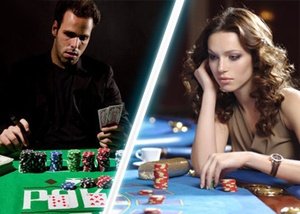 Once upon a time, gambling was exclusively the preserve of us men-folk. Usually associated with casinos, pubs, sports and Mafia-run gambling dens, the betting world hasn’t always been welcoming to women.

Today, the picture is somewhat more different. Increased equality between the sexes has rendered gender virtually irrelevant, at least as far as individual rights are concerned. Gambling operators that attempt to exclude women today are, in most Western countries, breaking the law, not to mention cutting off a large proportion of their potential customer base.

But do women gamble in the same way as men? Do they spend the same, and enjoy similar games? Or are women still a different kettle of fish when it comes to how they spend their gambling time?

Gambling remains a majority male pursuit, with 57% of all gamblers being male. By contrast, the 43% tend to play in a slightly different way.

Studies have shown that for men, gambling is an exciting activity – they gamble for the risks, and for the rewards that can come from that bigger payoff.

By contrast, women tend to gamble for recreation and relaxation. They aren’t as aggressive in their gambling behaviour as men, as a rule, and tend to prefer games that don’t require much in the way of skill. Slots machines and bingo are disproportionately favoured by women over men.

But it’s not just what they play that sets the genders apart. Women tend to play over longer sessions, spending more of their time gambling than their male counterparts. However, they do so at lower stakes, whereas men tend to gamble in shorter bursts with higher stakes – probably as a result of necessity in man cases, rather than design.

Interestingly, men also play a lot more often than women, with the mean spanning over 115.2 gambling days per year, compared to just 71.5 days for women.

While there are clear differences in preferences and gambling style, it should also be noted that there is no difference when it comes to lotteries and scratch cards. Both men and women choose lottery-based games with the same frequency, and there’s no discernible difference in prevalence between the sexes when it comes to these forms of gambling.

It is thought that are 0.6% of the British population can be defined as problem gamblers, based on statistics covering both England and Scotland. However, when we look at the gender aspects of problem gambling, this disproportionately affects men over women.

So it’s clear already that there are some substantial differences between how men and women gamble. But when we start to dig a bit deeper into the statistics, the picture becomes even more interesting.

Meanwhile, women lose out at a more respectable £2659.92 – that’s nearly £250 a month, more than enough for a weekend at a spa with some change for a haircut.

For men, the average age of a gambler is 33 – roughly about the age where many realise their paycheck is no longer their own.
For women, it comes in a 29 – the same as the average age for new mothers in the UK. I wonder if there’s any correlation there…

For women, you’re looking at an average deposit of £67.00 – about the cost of a cut and colour at the local salon.

Most men wouldn’t dream of spending that kind of money on themselves, but for some reason seem more than happy to up the ante when it comes to gambling, with average deposits clocking in at £94.00 – more than enough for a night on the town with the lads, if they can prise themselves away.
Gambling is no longer anything like an exclusively male activity, and it’s likely that women will become even more represented in gambling stats over time, as more games specifically targeting women are developed, and more women experience the thrills and spills of gambling for themselves.
A closing thought – on average, sex lasts for 20 minutes. When you add up all the time both men and women spend gambling, they’re missing a whopping 129,600 chances to get lucky between the sheets.
Now there’s a reason to get your gambling time under control!