The Denver Broncos have terrible luck when it comes to wide receivers blowing out their knees. The latest victim is Tim Patrick, who led the Broncos in touchdowns last season, when he went down with a knee injury in training camp on Tuesday. 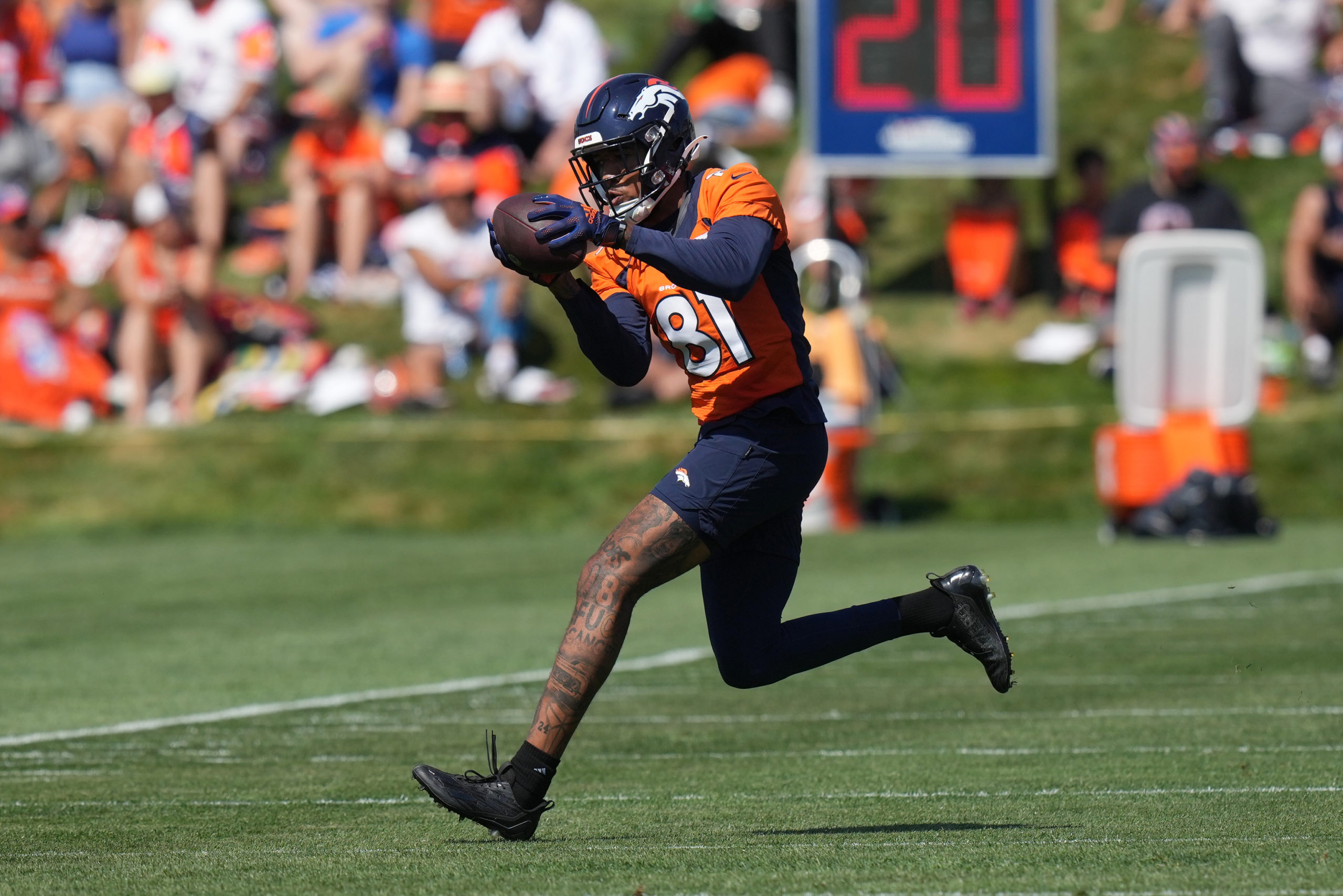 Tim Patrick from the Denver Broncos catches a pass from Russell Wilson in training camp before his knee injury. (Image: Getty)

The Broncos had high hopes for Patrick after they acquired Russell Wilson in a trade with the Seattle Seahawks.

An MRI revealed an ACL injury, which means Patrick is dunzo for the season.

“Guys like Tim, it breaks your heart,” said Broncos coach Nathaniel Hackett. “The worst part of this game is when things like this happen. Tim’s a guy that’s well respected across this team, across this league.”

The Broncos also lost running back Damarea Crockett to an ACL injury. Team usually have two players blow out their knees over the duration of a season, but the Broncos had lightning strike twice in the same day.

The Broncos entered the preseason as a popular pick to win the Super Bowl after Wilson joined the Broncos. You can back the Broncos at +1600 odds to win Super Bowl 57, according to a recent update by DraftKings.

The Broncos play in a stacked AFC West, but they’re third out of four teams on the NFL futures board at +260 odds to win the division.

For a third season in a row, the Denver Broncos lost a wide receiver to a serious knee injury after Patrick went down. In 2020, Courtland Sutton suffered an ACL knee injury. Last season, KJ Hamler blew out his knee in a Week 3 victory against the New York Jets. However, the Broncos were definitely rattled by losing Patrick, who is one of the most popular players on the team.

“It hurts,” said Sutton. “To see a guy who works his butt off all offseason, his preparation is second to none. We’re praying for the best.”

Patrick went from a practice player to a starting WR who led the team in receptions (53) and touchdowns (5) last season. He signed a three-year deal worth $30 million in the offseason.

In four seasons with the Broncos, Patrick played 55 games and caught 143 passes for 2,009 yards and 12 touchdowns. He tallied 11 touchdowns in his last two seasons.

The Broncos liked their batch of wideouts which also included speedster Jerry Jeudy and Sutton. With Wilson able to air the ball out, the Broncos looked like they had a proper aerial attack to win shootouts against the high-octane offenses in the AFC West including the Kansas City Chiefs and LA Chargers.

Expect wide receivers Montrell Washington and Kendall Hinton to compete for the open spot. Washington is a rookie and fifth-round pick out of Samford. Hinton is a second-year player out of Wake Forest who caught 15 passes and one touchdown last season in limited action.