Cyberknife not only left the heralded Haskell Stakes duel between Jack Christopher and Taiba in the dust, he left both horses behind – along with the Monmouth Park track record for 1 1/8 miles. 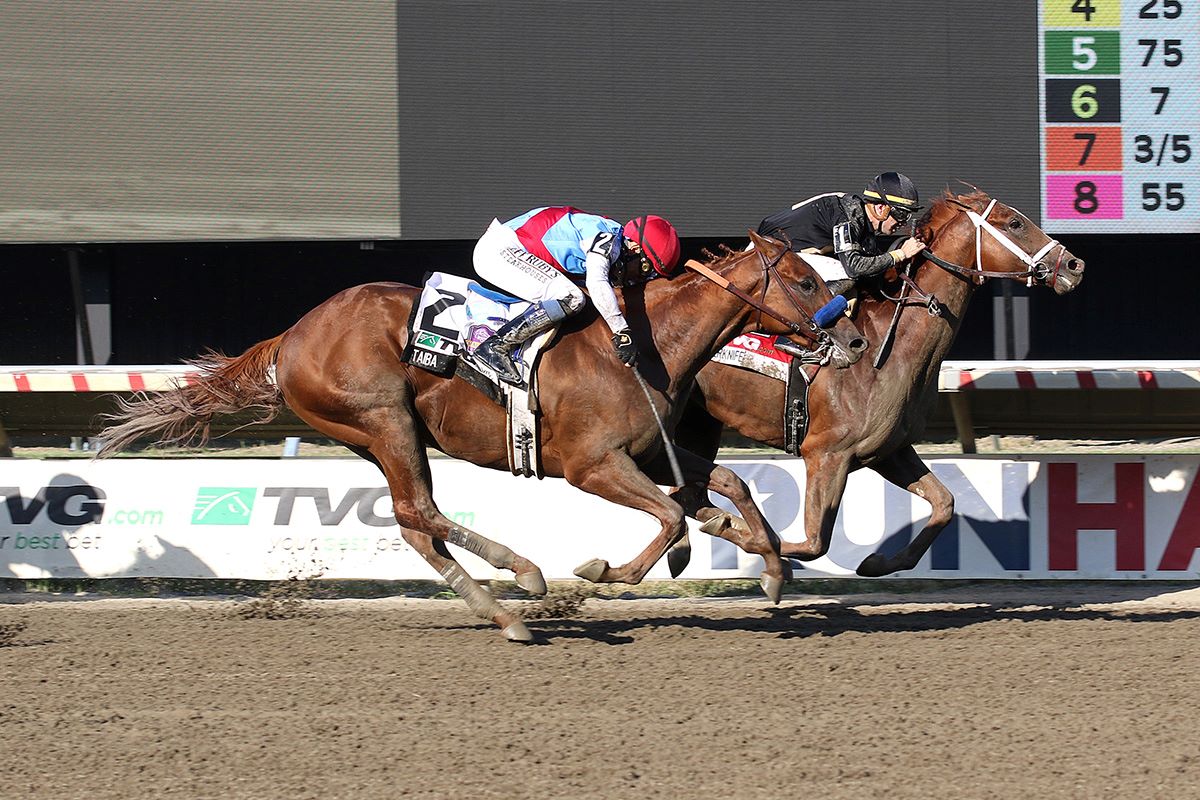 Cyberknife (inside) held off a surging Taiba at the wire to win the Grade 1 Haskell Stakes. He set a Monmouth Park record for 1 1/8 miles along the way. (Image: Monmouth Park)

Also left behind was Jack Christopher’s aura of invincibility, along with Chad Brown’s chances of sweeping Monmouth Park’s five Saturday stakes. And sent to the forefront of a wide-open 3-year-old class was a horse who finished 18th of 20 in the Kentucky Derby.

Cox defends his Haskell title from 2021

“I think this is his best race to date,” Cox told reporters after the race. “Throughout the race, I thought he looked very professional with the way he handled himself. At the quarter-pole, Florent (Geroux) had a nice hold of him and he was loaded. He responded well when asked. He flew at the end. I am very proud of him. He was able to settle. Florent took a good hold of him and then made a run up the backside and got him in position along the rail.”

Judging by his career-best 102 Beyer Speed Figure, it was Cyberknife’s best race. Cox described how Geroux, aboard Cyberknife, pulled the colt inside coming into the far turn. He then opened up as they hit the quarter pole and went by Howling Time, Taiba and pace-setter Jack Christopher. He and Howling Time yielded, but Taiba rallied, forcing a photo finish that Cyberknife won.

“It looked like he made the right decision staying to the inside and we were able to hold off Taiba,” Cox said. “It was a big effort. I’m very proud of this horse and our whole staff. He’s been a challenging horse at times. A lot of the good ones are.”

As for Taiba, the Bob Baffert charge handled the distance easily. But running only his fourth race – and first since a 12th at the Kentucky Derby May 7 – was telling. Jimmy Barnes’ Baffert’s longtime assistant, praised Taiba’s efforts.

“It’s possible his lack of seasoning might have had something to do with it a little bit. I have to talk to Mike (Smith, the jockey) and see what he thinks,” Barnes said. “We’ll get him home to California and see how he comes out of the race and go from there.”

The big one eluded Brown — but nothing else did

It’s possible Jack Christopher’s lack of true route experience had something to do with his first loss in five starts. He came into the Haskell with plenty of speed, but no route trips beyond a one-turn mile.

At the same time, it gave Al Gold his first Grade 1 victory. The owner of Cyberknife, Gold named the horse after the treatment he underwent for prostate cancer. The cancer is now in remission and Gold’s $400,000 purchase is headed to the Breeders’ Cup, courtesy of a victory in his old backyard. Gold lived in nearby Ocean Township for years before moving to Saratoga and Florida.

“This is a very big victory, especially to win this race right in my old back yard,” Gold said. “The Arkansas Derby was very big and the Haskell is as well. It’s a very big deal.

“I started betting horses when I was a kid and have owned horses for 40 years. You always have fantasies. You want to win the Kentucky Derby and all the big races, but this is one of the ones I really wanted to win.”

Next up for the Gun Runner progeny is likely the Aug. 27 Grade 1 Travers Stakes. That field is already shaping up to be the best 3-year-old field of the year.