After six days of pre-games, the “Find Your Way to WPT World Championship Series” welcomed players in the Crown Poker Club in Ha Noi, Vietnam with Day 1A of the Main Event ₫5 Billion (~$201,207) guaranteed. Surprising the early goers was an incentive for all Day 1A attendees, a special bonus reward of ₫30 Million if you close the day as chip leader.

By the end of registration, 86 chased it, however only 11 players moved on to the next round. Navigating his way to the top was Phan Duy Tai with the largest stack to seize the coveted bonus prize. Also powering through was hot running Nguyen Huu Vinh aka Hoa Vinh who has already been seen at two final tables this series. Another notable player was Ngo Minh Tien who recently placed 4th at the record breaking Poker Dream Vietnam Main Event.

For those that missed the mark or just making their way to the series, the Main Event continues on November 4 with Day 1B up on the plate. Buy in is ₫16.5 Million (~$665) with unlimited re-entries. For the 11 survivors, you have a two day break before returning for the Final Day on Sunday, November 6 at 11am.

End of Day 1A survivors 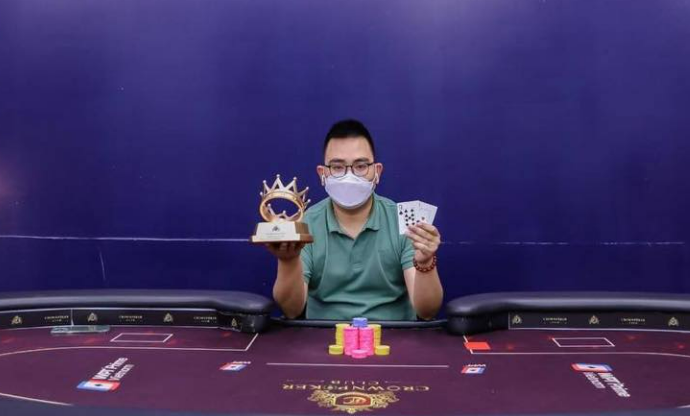 Just last night, Ta Khanh Linh aka Jack Risk emerged with his head high at the Bounty Hunter Event then tonight, he followed it up with another takedown. Linh outlasted the 22-entry field of the Short Deck event to become the first player to win two events in this series. In addition to the trophy, he added ₫31,850,000 (~$1,280) to his growing earnings. Also running deep was Mystery Bounty winner Le Van Duc with a third final table cash.

Stick with us here at Somuchpoker as we bring you full coverage from start to finish. All photos courtesy of Crown Poker Club.