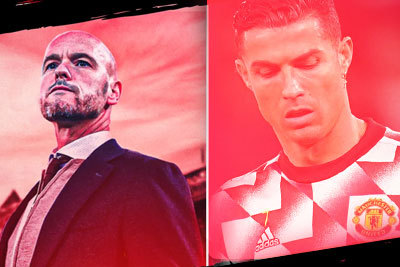 On Wednesday, October 19th, 2022 the manager of Manchester United, Erik ten Hag, stated that he will “deal with” the superstar veteran striker, Cristiano Ronaldo, after Ronaldo decided to leave the pitch early as he walked down the tunnel prior to the conclusion of Manchester United’s victory over Tottenham Hotspur with a final tally of 2 to 0.

Cristiano was named to the bench but Ronaldo left his seat in order to head to the Manchester United locker room prior to the final whistle of Wednesday night’s match against Tottenham Hotspur even though the manager of Man U Erik ten Hag still had 2 – available substitutions remaining at his discretion.

Ten Hag frustratedly declined to expand on or say much regarding the situation at hand during Erik’s post – match address to the major sports media outlets, as he said that only he would handle the issue with Ronaldo on Thursday, October 20th, 2022, and it will most likely be handled privately.

“I don’t pay attention [to that]

today, we will deal with that tomorrow,”

the head coach of Manchester United, Erik ten Hag, responded when he was asked about Cristiano Ronaldo’s poor behavior for leaving the bench during the 90th – minute of the match on Wednesday night.

“The focus today was on a magnificent performance from all the 11 – players.

“I have to correct myself, not just 11 – players but the substitutes who came on, it was a squad performance.

“We deal with that [Ronaldo]

This just so happens to not be the very 1st – time that the Portuguese superstar striker has instigated a problem for Erik ten Hag by Ronaldo deciding to leave the pitch early before the match was over.

The head coach of Man U, who is known for being a no – nonsense Dutchman, labeled Cristiano’s behavior as “unacceptable.” after Ronaldo was pointed out for leaving the legendary and historic Old Trafford Stadium prior to the conclusion of a preseason friendly vs. Rayo Vallecano back in July of 2022 following Ronaldo’s substitution at the half – time mark of that game.

“This is unacceptable,” Erik ten Hag went on to say. “For everyone. We are a team and you have to stay to the end.“

Erik ten Hag was also left to have to defend Cristiano earlier this week after the Portugal national team captain was witnessed shaking his head in disagreement with Erik’s decision to substitute Ronaldo during the Manchester United football club’s nil – nil draw against Newcastle on last Sunday, October 16th, 2022.

Cristiano Ronaldo has scored just 2 – goals throughout his 12 – appearances so far this football season for Manchester United. He was substituted with only 18 – minutes remaining even though Man U was in need of a goal score at that moment, but Erik ten Hag proclaimed that he did not have a problem with the reaction that was displayed last Wednesday night.

“I think no player is happy when he [is taken]

off, and especially not Ronaldo, I understand that,”

in quite a normal way, [I have]

no problem with that.