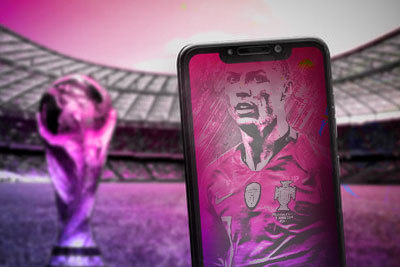 On Wednesday, November 16th, 2022 one of the greatest footballers of all time in Cristiano Ronaldo announced that he will have to sit out of Thursday’s 2022 World Cup warm – up match versus Nigeria due to the fact that he is battling a severe stomach virus.

The highly – talented Manchester United striker also needed to remain sidelined during Portugal’s training session on Wednesday, November 16th, 2022 after he was training with the Portuguese national club the past couple of days.

Media Statements from the Head Coach of the Portugal National Team

“Ronaldo has a gastritis and did not train today in order to recover and rest,” the head coach of the Portugal men’s national football club, Fernando Santos, stated, “It’s a condition that doesn’t help much, as it affects the players a lot, they lose a lot of liquid, they weaken. He won’t be ready for tomorrow, for sure.”

Asked whether the Portugal captain really had a stomach bug or it was just an excuse after the uproar that Ronaldo’s explosive interview had generated around the world, Santos laughed and said, “If it were another player, we wouldn’t question it, but yes, he really has gastritis and is in no condition to play.”

In Sunday’s interview, the now 37 – year – old Ronaldo criticized Manchester United by explaining he has no respect for the head coach of his club team in Erik ten Hag, which definitely jeopardizes his professional football future of playing at Old Trafford with Man U.

Cristiano joined up with the Portuguese national team on Monday, November 14th, 2022 to prepare for his 5th – World Cup appearance as a player. Santos mentioned that he ultimately respects Ronaldo’s decision, and that he does not think that Ronaldo’s choice will affect his national team in any kind of impactful manner.

didn’t have to inform us about the interview,”

When Santos was asked whether or not he feels the need to start Ronaldo, Santos replied by saying, “I don’t feel any obligations. No one does. All the players that are here can be starters.”

Ronaldo, who is at the very top of the men’s international goal scoring list with 117 – international match goalsthroughout his illustrious football career, is currently in the thick of his most difficult football season. Cristiano has only netted 3 – goals over the course of his 16 – games across all competitions, and Ronaldo has managed to start in just 4 – Premier League games during this campaign.

Coach Ten Hag has told the front office executives and managers of the Manchester United football club that Ronaldo should not be allowed to play football for Man U ever again because of his blatant disrespect towards his coach in Erik ten Hag.

On Wednesday, November 16th, 2022 Manchester United apparently removed a humongous mural consisting of Cristiano Ronaldo’s image at the historic and legendary Old Trafford stadium. That image is so large that it took up a very big part of the exterior of the Old Trafford stadium.

The 5 – time Ballon d’Or Award winner is presently under contract with Manchester United until June of 2023, and he has a player option to extend that contract for an additional year if he would like to. The former Real Madrid and Juventus football superstar striker requested to leave Man U over the last summer with the hopes of playing in the Champions League football competition, but there were no interested suitors to fill that role for the ever – aging Portuguese forward.