Cue the trash can and burning dumpster memes, it’s time to talk about the NFC East. The Dallas Cowboys are the best team in one of the weakest divisions in the NFL, so it’s no surprise the Cowboys are +135 odds to win the NFC East in back-to-back years with the Philadelphia Eagles as their closest rivals at +165 odds. 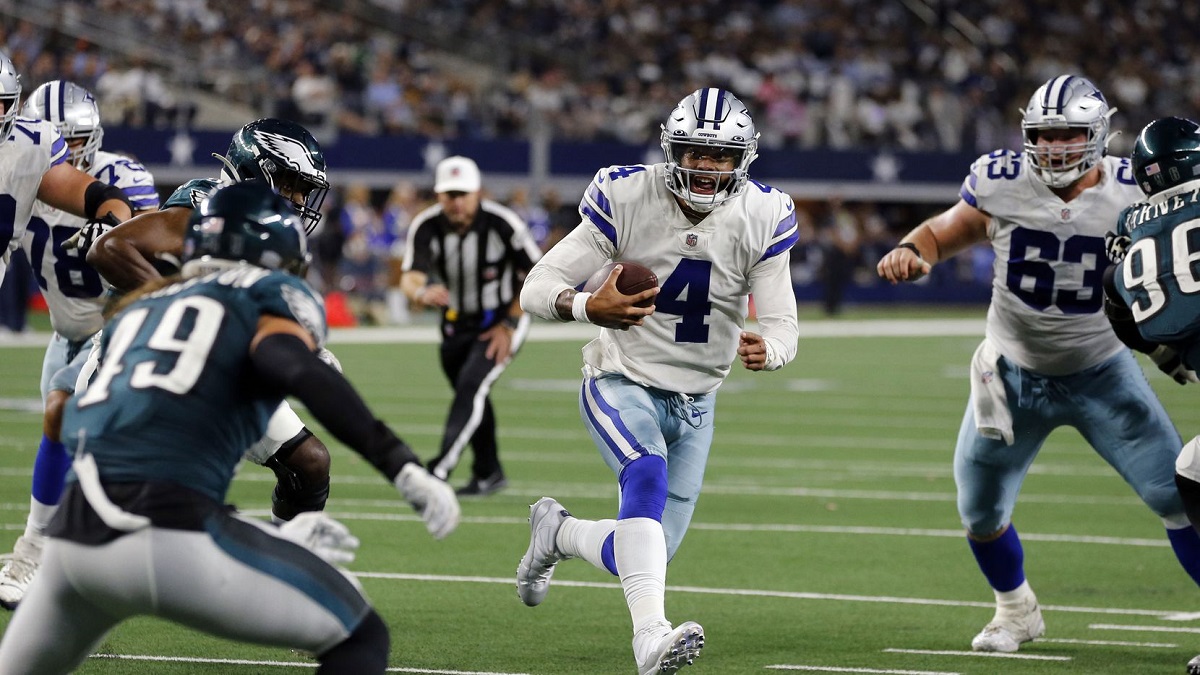 Dak Prescott from the Dallas Cowboys runs toward the end zone against the Philadelphia Eagles in an NFC East Division battle last season. (Image: Porter Lambert/Getty)

It seems like the division winner in the NFC East shuffles every season because they have not had a repeat champ since the Eagles won four straight titles between 2001 and 2004. Will there be another shuffle in 2022? Or will the Cowboys dominate the division once again?

Dak Prescott is a trooper and rushed back to the Cowboys following surgery to repair a gnarly compound fracture on his ankle. He had an inconsistent season, yet the Cowboys still finished 12-5 because they easily dominated the NFC East. Prescott showed flashes of his awesomeness last year, but with an entire offseason to heal up, he’s expected to look like his old self and light up opposing defenses.

The Cowboys have a win total of just 10.0 o/u this season. They could start the season 0-2 with two tough games against the Tampa Bay Bucs and Cincinnati Bengals, but they face some easy opponents this year against the AFC South including the lowly Jacksonville Jaguars and Houston Texans.

On paper, the Cowboys should win the NFC East again at +135 odds, but divisional matchups are always tough to predict, even in an awful division like the NFC East. The Cowboys outlook depends on the quality of the other teams in the NFC East. Will the New York Giants crawl out of the basement? Will Jalen Hurts have a breakout season? Can the Commanders can make a run with Carson Wentz?

The Eagles started last season 2-5 before they finished the season on a 7-3 stretch to squeak into the playoffs as a NFC Wild Card team. Their run ended with a first-round exit courtesy of Tom Brady and the Tampa Bay Bucs.

Hurts gets a chance to throw to a top-notch wide receiver this season after the Eagles signed AJ Brown in free agency. A banged-up Miles Sanders posted 900-plus combined yards in only 12 games last season, but the running back unleashed an impressive 5.5 yards per carry despite scoring zero touchdowns.

The Eagles have a win total of 9.5 o/u games this season, but they’re one of the fortunate teams this season with nine home games versus only eight road games. Their toughest stretch occurs in December with three consecutive road games against the Giants, Chicago Bears, and Cowboys on Christmas Eve.

You can take a flier on the Eagles at +165 odds, because anything can happen in the NFC East. As much as we like to make fun of this division, let’s not forget that two NFC East teams advanced to the playoffs last season including the Eagles.

The Commanders scrambled last season and somehow went 7-10 after Ryan Fitzpatrick fractured his hip in Week 1. It ended up being a career-ending injury for Fitzpatrick, which was a bad beat for both the veteran quarterback and the franchise. Taylor Heinicke came off the bench to start the rest of the season and he did a decent job all things considered.

The Commanders were in the market for a new quarterback and rumored to acquire Jimmy G in a trade. However, the Commanders ended up with Carson Wentz, who makes a return to the NFC East. If they’re looking at a one-year rental, Wentz is manageable. Wentz gets to suit up against his old Eagles squad twice this season in Week 3 and Week 10.

The Commanders wisely locked up Scary Terry McLaurin to a $71 million contract extension. He’ll get a chance to thrive if Wentz can get him the ball.

Oddsmakers do not think Wentz and the Commanders can inflict much damage this season with a win total of just 8.0 o/u. The Commanders are +500 odds to win the NFC East, but it looks like it will be a two-horse race between the Cowboys and Eagles.

The Giants get a chance to rebuild the team after a disastrous run the last few seasons under inept general manager Dave Gettleman. The G-Men ditched Gettleman after four seasons, and fired head coach Joe Judge after two ugly seasons. The Giants essentially raided the Buffalo Bills to help pull them out of the gutter. Brian Daboll takes over as the head coach after several successful seasons as the OC with the Bills.  Joe Schoen is the new general manager who seems highly competent and has an actual vision versus Gettleman’s crash and burn strategy.

Daniel Jones is in the final year of his rookie contract, and he seems like a lame duck QB unless the Giants can figure out a way to add Jimmy G in a trade. Otherwise, the Giants signed Tyrod Taylor as an insurance policy against Jones.

The injury-prone Saquon Barkley has been one of the unluckiest players since he entered the league. He missed 21 games over the previous three seasons, but let’s hope he can stay on the field and off the IL. After scoring 15 combined touchdowns in 16 games as a rookie, he found the endzone only 12 times in the last three seasons spanning 28 games due to injuries, an awful playbook, and atrocious offensive line.

The bookies seem hopeful about the Giants with a win total of 7.0 o/u, but they’re the long shot on the board to win the NFC East at +800 odds. We’ll see if Daboll and the Giants can become the surprise team in the division and NFC this season, but don’t expect any miracles with Danny Dimes under center.