This time, Classic Causeway won’t be sneaking up on the Grade 1 Saratoga Derby field as a 26/1 afterthought. That untested turf question mark is now an exclamation point. 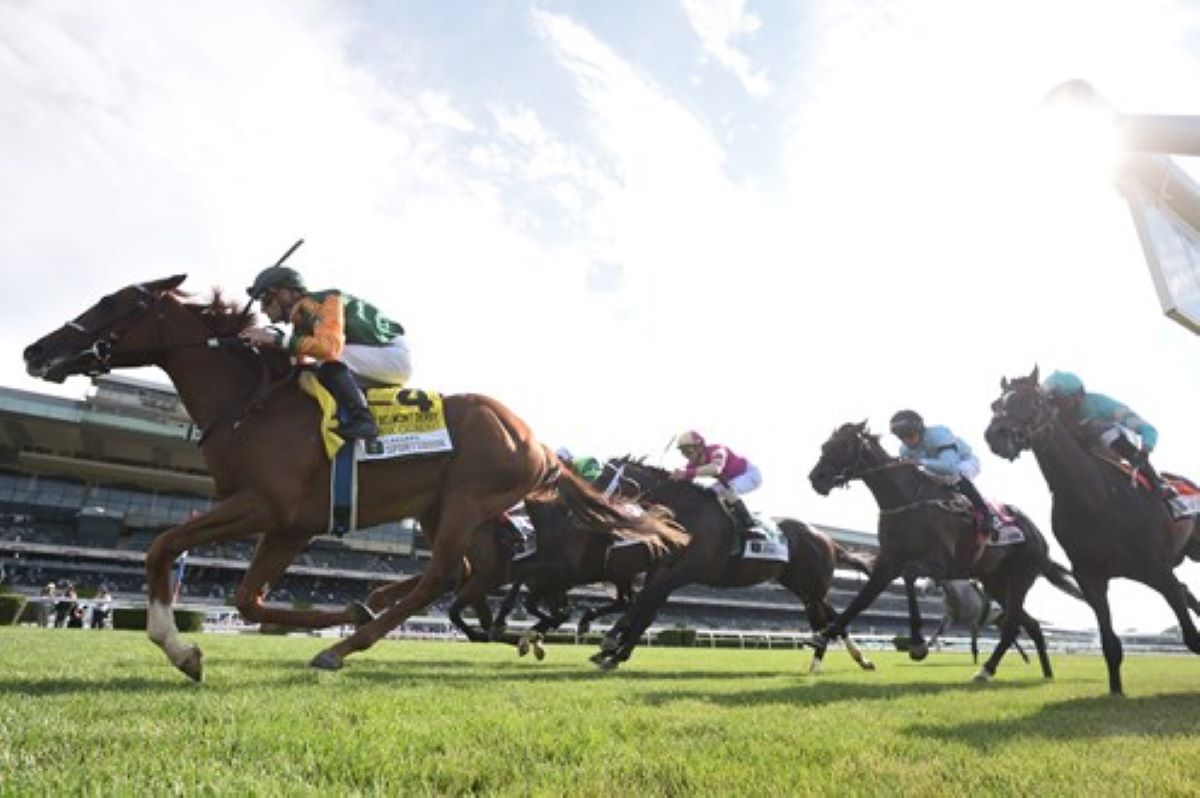 Classic Causeway won this cavalry charge in last month’s Belmont Derby. He is one of seven horses from that race in Saturday’s Grade 1 Saratoga Derby, the secong leg of the NYRA Turf Triple. (Image: Coglianese Photos)

And thus, we have the biggest storyline for Saturday’s Saratoga Derby, the second leg of the New York Racing Association’s Turf Triple. It’s also one of three Grade 1s on Saratoga’s Saturday Whitney Day card.

The 11-horse field of 3-year-olds goes 1 3/16 miles on Saratoga’s Mellon Turf Course. They do so with a lot of familiar faces in the starting gate. Seven of the 12 horses from last month’s Grade 1 Belmont Derby — the opening Turf Triple leg — are in the Saratoga Derby field.

No 26/1 Classic Causeway at Saratoga Derby

“I’m real proud of how he handled himself in the Belmont Derby and I think he’ll rate a little better in his next start,” trainer Kenny McPeek told the New York Racing Association. “He seems to be turning off a little bit and he’s a very strong-willed horse. I’m just really glad to get a Grade 1 out of him.”

Classic Causeway comes in off a 1:01.88 five-furlong breeze on Saratoga’s Oklahoma training track that was third of 31 at that distance July 31. McPeek said he’s working well, strong-willed and all, but he is aware of what awaits his not-so-secret turf stakes winner. That starts with his 8/1 morning line odds.

Another reason for that is the Belmont Derby’s cavalry-charge finish. The top six finishers were separated by only 1 1/2 lengths. Seventh-place Limited Liability finished less than four lengths back.

Emmanuel, a late Belmont Derby scratch, set the precedent table for Classic Causeway. He too, transitioned from a solid dirt horse to a graded stakes turf winner when he won the Grade 2 Pennine Ridge June 4 at Belmont Park.

“He handled the mile and an eighth well in the Pennine Ridge,” Pletcher said, explaining how Emmanuel’s front-running style diverges from Classic Causeway’s need-the-lead style. “He had the fractions go his way which, with Classic Causeway in here, he’s a pace factor that wasn’t in the Pennine Ridge. But he’s very tractable and doesn’t need the lead. I don’t foresee it being a problem.”

Annapolis too, bypassed the Belmont Derby. Instead, Pletcher sent him out to a 2 3/4-length victory in the July 4 Manila Stakes at Belmont Park. That came with a career-best 91 Beyer Speed Figure and a good response to his shocking runner-up finish to 83/1 Wow Whata Summer in the Grade 2 Penn Mile at Penn National. That’s his only loss in four career races.

“”We were really on the fence between the Manila and the Belmont Derby. But with only one start under his belt, we felt it made sense to come back and get another race into him before stretching him out,” Pletcher said.

That brings us to the European contenders: Nations Pride and Stone Age. Both return for more than the smaller pieces they grabbed in the Belmont Derby.

Nations Pride actually gave Classic Causeway a scare, closing from ninth on the backstretch to finish three-quarters of a length behind.

He stayed in New York afterward, training with Charlie Appleby’s traveling assistant Chris Connett. The Irish-bred colt put in four Oklahoma workouts, the most recent being a six-furlong 1:15.21 July 31.

“I just think he needs a trouble-free run this time,” Connett said. “He looked like he was going to make a nice run into the home turn at Belmont and he got checked, but he still rallied and made a big effort. If he can have a clear run through, he should take some beating.”

Stone Age went six-wide down the stretch to grab the bottom portion of the Belmont Derby trifecta by less than a length. He went back to Europe afterward and returned Sunday.

As for Sy Dog, he returns to the Saratoga Derby after that sixth-place finish, one that came by 1 1/2 lengths.

“I can’t give him any excuses,” trainer Graham Motion said, brushing aside the fact Sy Dog went four-wide into the stretch and couldn’t gain any ground. “I thought he ran a really good race. Manny (Franco) loved him and I thought he gave him a great ride. … He got stuck down on the inside, but I can’t give that as an excuse. He wasn’t beaten very much. If he can run back to that race, he should be competitive.”