Christophe Laporte (Jumbo-Visma) became the first rider from France to win a stage on Le Tour this year when he launched an unexpected counter-attack with less than one kilometer to the finish line at Cahors, and held off the premier sprinters in the world to win Stage 19 of the 2022 Tour de France. 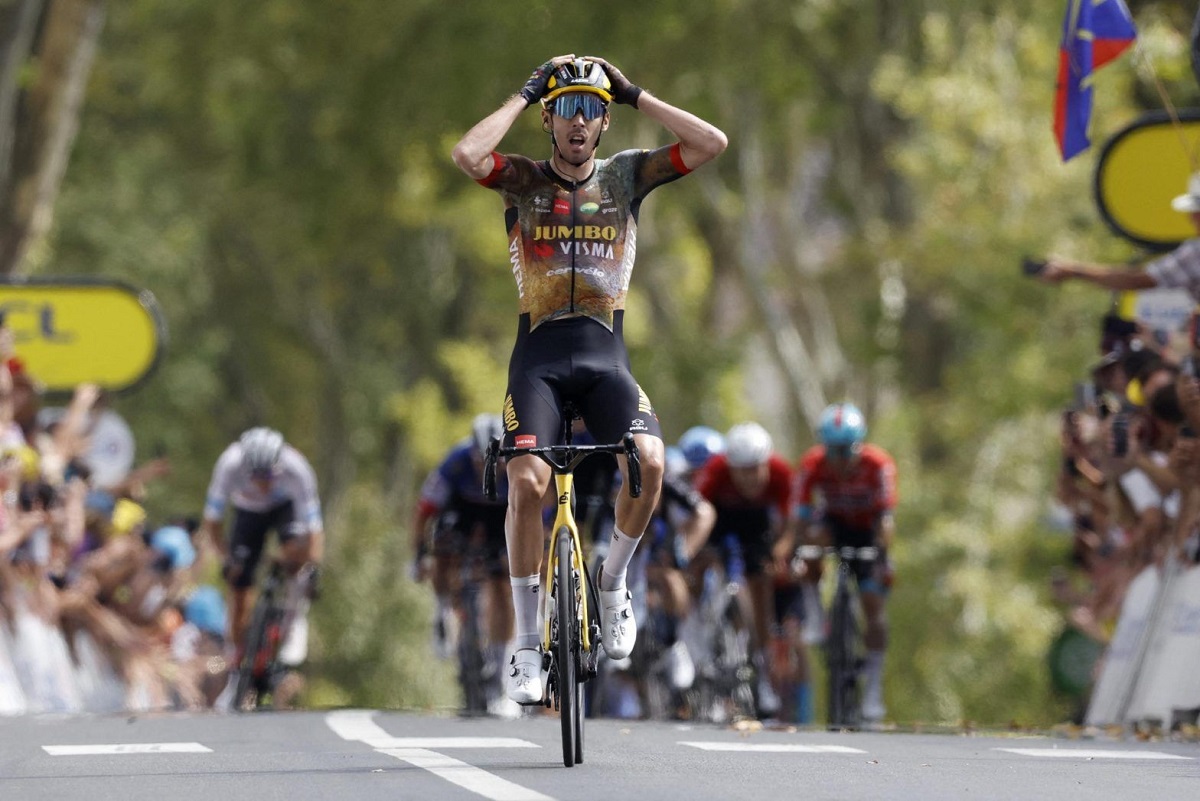 Jumbo-Visma continued their domination at the 2022 Tour de France after locking up the yellow jersey yesterday in Stage 18 thanks to Jonas Vingeaard. Instead of Wout van Aert winning at Cahors, it was his Jumbo-Visma teammate from France who rode to stunning victory.

Laporte became the third member of Jumbo-Visma — along with Vingegaard and van Aert — to secure a stage victory this summer.

“I still can’t believe I’ve won,” said Laporte. “The team really trusted me today and Wout told me that today was for me after we had a great Tour. Our first goal was to make sure Vingegaard was safe with three kilometers to go.”

After several brutal stages in the Pyrenees, the weary peloton was challenged with a 188.3 km route from Castelnau-Magnoac to Cahors. Le Tour this year was not very generous for sprinters, with Stage 19 as the perfect example, which is listed as a flat stage but instead of a bunch sprint, Laporte secured a solo victory. Even though there were heady crosswinds, the heat wave made it another unpleasant ride.

Jasper Stuyven (Alpecin-Deceuninck) and Fred Wright (Bahrain Victorious) attempted a breakaway but had a very slim ten second lead with 10 km to the finish. With less than one kilometer to go, the peloton and was close to absorbing Stuyven and Wright. The sprint teams were jockeying for position at the front of the peloton, but Laporte saw an opening and launched a counter attack.

Laporte quickly caught Wright and Stuyven, and used them to help lead him out. With 500 meters to the finish line, Laporte dropped the hammer and went full gas to the finish line. Not even the top sprinters in the world could catch the Frenchman.

“Just before entering the last kilometer, I saw that there was a gap and I made the jump to the front group,” added Laporte. “I can’t believe I could finish it off. The fact that it is also the first French victory makes it extra beautiful. I’m very happy, also for my family and the French public, who I hope are happy too.”

Laporte held off Jasper Philipsen (Alpecin-Deceuninck), who finished in second place. Philipsen won a bunch sprint in Stage 15, and the Belgian rider was seeking another sprint victory.

The final individual time trial is set for Stage 20. Everyone in the peloton is tired, but it’s the penultimate stage before the final stage in Paris on Sunday. The individual time trial is a 40 km route from Lacapelle-Marival to the medieval town of Rocamadour. Rocamadour has never hosted the Tour de France before, so cycling fans will catch a glimpse of the historic town nestled into a rocky hillside.

Wout van Aert (Jumbo-Visma) is the betting favorite at -120 odds to win Stage 20, which would mark a third stage victory this year. Filippo Ganna (Ineos) is a time-trial specialist and he’s +275 odds as the second favorite on the board.

Tadej Pogacar (UAE Team Emirates) sits in second place in the overall GC standings. He’s +700 odds to win this meaningless stage because it’s nearly impossible to make up over three minutes on Jonas Vingegaard in first place. The defending champion is a time trial beast and he’s ultra competitive, so he might want to secure a third stage victory before Paris.

Jumbo-Visma will want Vingegaard to take it easy and not force the action and risk a crash, but he’s +700 odds to win a third stage since securing the yellow jersey in Stage 11.

Check out more of OG’s coverage of the 2022 Tour de France.