The Kansas City Chiefs are the perennial betting favorite to win the 2022 AFC West and they’re +175 odds this season, just ahead of the Los Angeles Chargers (+220) and the Denver Broncos (+260). 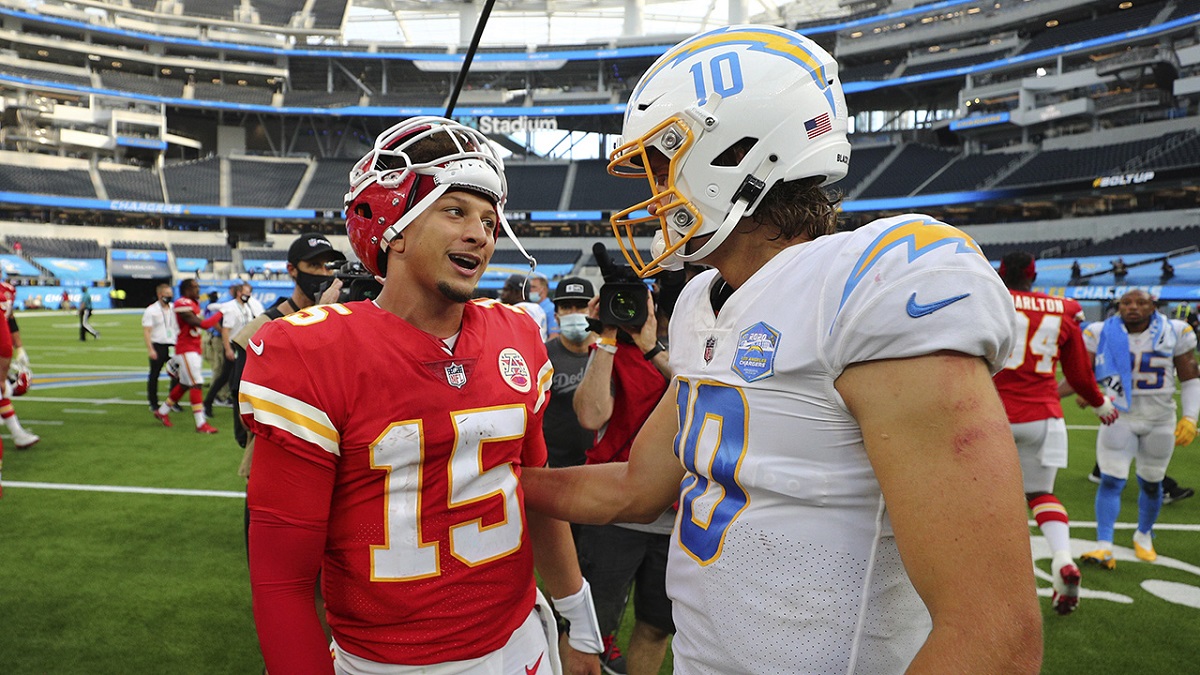 The Broncos saw a huge surge in futures bets — Super Bowl, AFC Championship, and AFC West — after they acquired Russell Wilson in a trade.

The AFC West is stacked with three of the premier quarterbacks in the NFL — Patrick Mahomes, Justin Herbert, Wilson — and Derek Carr from the Las Vegas Raiders is no slouch either. Carr has the benefit of offensive guru Josh McDaniel as his new head coach, so the Raiders are not a pushover this season.

Except all four teams to chew each up this season, which makes any AFC West division game must-see TV.

The Chiefs had to say goodbye to Tyreek Hill, and without the Cheetah the Chiefs lose their home run threat. Then again, opposing defenses were shutting down any downfield options for Mahomes and forcing him to make short passes to beat them. Mahomes and the Chiefs were going to have to employ a dink and dunk offense anyway to combat opposing defenses this upcoming season, so losing Hill as not as devastating as you think. The Chiefs might not light it up with long-range bombing, but Mahomes is still the best in the league.

The Chiefs will not have a cake walk this season, but they’re still the best team in one of the deepest divisions in the NFL. You can back the Chiefs at +175 odds to win the AFC West for a seventh season in a row.

If anyone can dethrone Mahomes and the Chiefs, it’s the Chargers. It’s only a matter of time before Herbert gets the best of Mahomes, but it might not be this season. The Chargers are worthy of a flier and value pick at +220 odds and that’s only because the pubic loves the Chiefs and everyone else jumped on the Wilson/Broncos bandwagon.

The Chargers missed the playoffs last season with a 9-8 record, but they’ll have to win at least 10 games if they expect to secure an AFC Wild Card spot. It’s a tough schedule for the Chargers this season with the NFC West playing the AFC West. But there’s definitely a couple of easy opponents, so expect Herbert to light up the Jacksonville Jaguars, Houston Texans, and Atlanta Falcons.

The Denver Broncos finally have a proper quarterback after several seasons of heartache and disappointment with players that were not even in the same league as Hall of Famers John Elway and Peyton Manning. Wilson got his wish an gets a chance to open up the offense with the Broncos. Every football fan in Colorado is super pumped at the possibility of becoming a legit Super Bowl contender with Wilson.

But let’s ease off the gas just a bit. It will take a season or two before the Broncos can be considered an elite team in the deep AFC. It begins with dominating the division first, but the Chiefs look like they’ll lock up a seventh-straight AFC West title. However, the Chiefs will fall eventually with Herbert and Wilson chasing down Mahomes.

The public has heavily backed the Broncos, which is why their odds bumped to +260 to win the AFC West. It’s an inflated number based on the Wilson excitement, but then again, it’s hard not to root for Wilson and the Broncos this season.

Josh McDaniel finally gave up on his dream to succeed Bill Belichick at the next head coach of the New England Patriots. So, he finally decided to leave Foxboro and head west to become the head coach of the Raiders. Of course, McDaniel could not have selected a tougher division with the AFC West. It’s safe to say that McDaniel has the weakest of the three quarterbacks in the division, but if anyone can get the most out of Carr, it’s McDaniel.

The Raiders luckboxed a trip to the playoffs last year, but it will be tough for them to replicate that feat based on their schedule. There’s a chance the Raiders start 0-5 with three road games against the Chargers, Tennessee Titans, and Chiefs plus two home games against the Arizona Cardinals and Broncos. They host our homes games in the final six pack of the season, but they face the Chargers, LA Rams, New England Patriots, Pittsburgh Steelers, San Francisco 49ers, and Chiefs. Mark the calendars for Week 15 when the Raiders head to Foxboro to play the Patriots on Sunday Night Football with McDaniel playing against his former team.

The Raiders are the long shot on the board at +650 odds to win the AFC West, but based on their difficult schedule, they could be hard pressed to win nine games this season with six total games against the Chiefs, Chargers, and Broncos.