The Chicago Bears want a new stadium, but Chicago Mayor Lori Lightfoot suggested constructing a dome on the top of Soldier Field in hopes of keeping the Bears in the city limits in favor of relocating to the suburbs at old Arlington Park Racetrack. 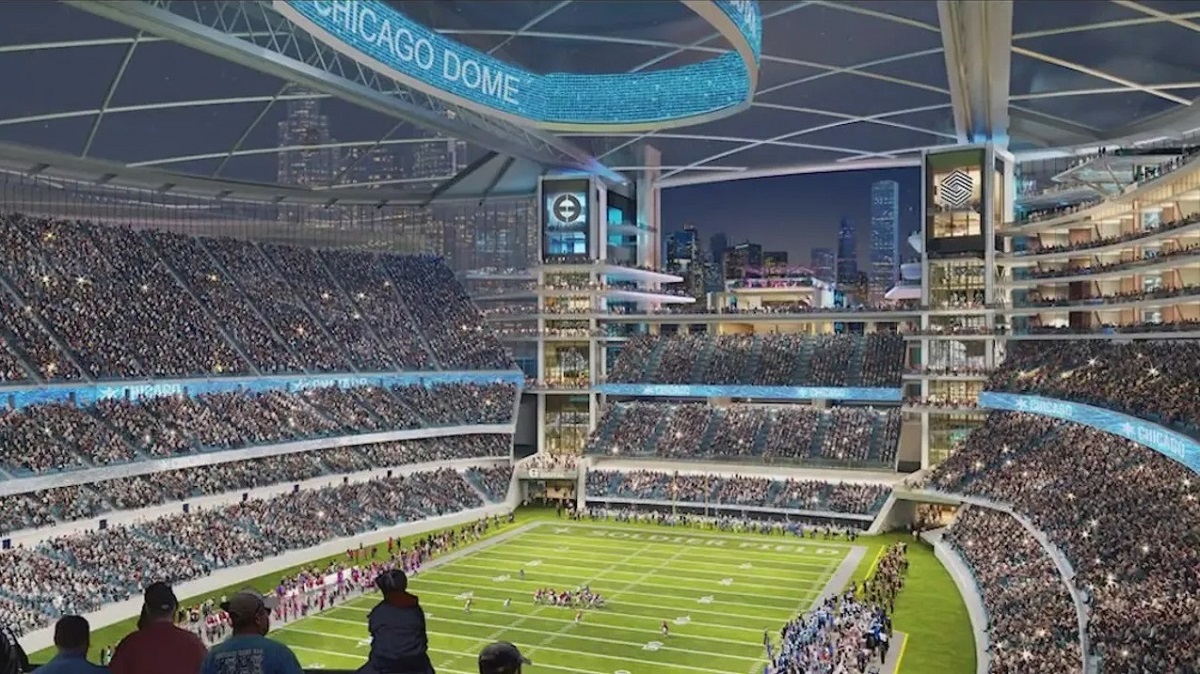 The city of Chicago wants to keep the Chicago Bears playing at Solider Field and suggested a renovation to add a dome. (Image: Getty)

The desperate dome move was proposed yesterday to entice the Bears to remain at Soldier Field, their home venue since 1971, which was originally constructed in 1924. The current lease at Solider Field expires in 2033.

The Bears renovated their home stadium in 2003 for $660 million, which looked like a UFO landed on top of Soldier Field. Almost 20 years later, the Bears are looking for a new home. Mayor Lightfoot offered a trio of proposals for a massive renovation that includes a dome.

Adding a dome to Soldier Field would negate any natural home field advantage like winds whipping off Lake Michigan or snow. How about the infamous Fog Bowl on New Years Eve in 1988? The Bears hosted the Philadelphia Eagles in an NFC Divisional playoff game that was engulfed in a menacing fog in the second quarter. The Bears made the most of the eerie fog and defeated the Eagles 22-12. With a dome, the Fog Bowl would’ve never happened.

Once the Bears purchased Arlington Park, it led to rampant speculation that they would leave Solider Field and the suburban area will become the location of a new stadium with additional seating, more food services and restrooms, swanky luxury and corporate boxes, and ample parking.

“As part of our mutual agreement with the seller of that property, we are not pursuing alternative stadium deals or sites, including renovations to Soldier Field, while we are under contract,” said the Bears via a statement. “We have informed the City of Chicago that we intend to honor our contractual commitments as we continue our due diligence and predevelopment activities on the Arlington Heights property. In the meantime, we remain committed to fulfilling our Permit Operating Agreement (POA) at Soldier Field.”

Before the Bears renovated Soldier Field in 2003, there was heavy discussion about building a new stadium in Arlington Park. Two decades later, the site is still an enticing option. The Bears want to pursue a redevelopment plan similar to what the Los Angeles Rams did with the former Hollywood Park Racetrack. The Rams redeveloped the area and built SoFi Stadium.

Arlington Park held its last horse race in September of 2021 when Sister Ruler won the Luxembourg.

Mayor Lightfoot released three proposals for a dome at Soldier Field. The construction estimations were in the range of $900 million to $2.2 billion. If you ever had to do any sort of renovations, you know the price always exceeds the initial estimate, so the city of Chicago is looking at a $2.2 billion bill to prevent the beloved Bears from migrating to the suburbs.

The first proposal suggested enclosing the entire stadium by rebuilding both and zones to install proper support structure for a dome.

The second proposal was rebuilding both end zones by adding support columns.

The third proposal included details on expanding Soldier Field to a multi-purpose venue to host soccer and concerts.

“An improved Soldier Field will deliver a world-class visitor experience,” said Lightfoot. “Furthermore, any of these proposed renovations will allow Soldier Field to retain its role as an economic engine for Chicago for years to come, as these changes will allow us to keep bringing sports, music and other exciting events to our city.”

Soldier Field is one of the smallest stadiums in the NFL, and it shares parking structures in the Museum Campus. The Museum Campus consists of 57 acres along Lake Michigan that also includes the aquarium, numerous museums, and a music venue.

Lightfoot also suggested the renovation could lead to corporate sponsorship and naming rights. However, will adding 8,500 seats and seven more luxury boxes be worth the price tag?