Todd Pletcher wants to paint a like-father, like-son picture with Corniche. This explains one reason why he chose Friday’s Grade 2 Amsterdam Stakes as the sophomore’s season debut. 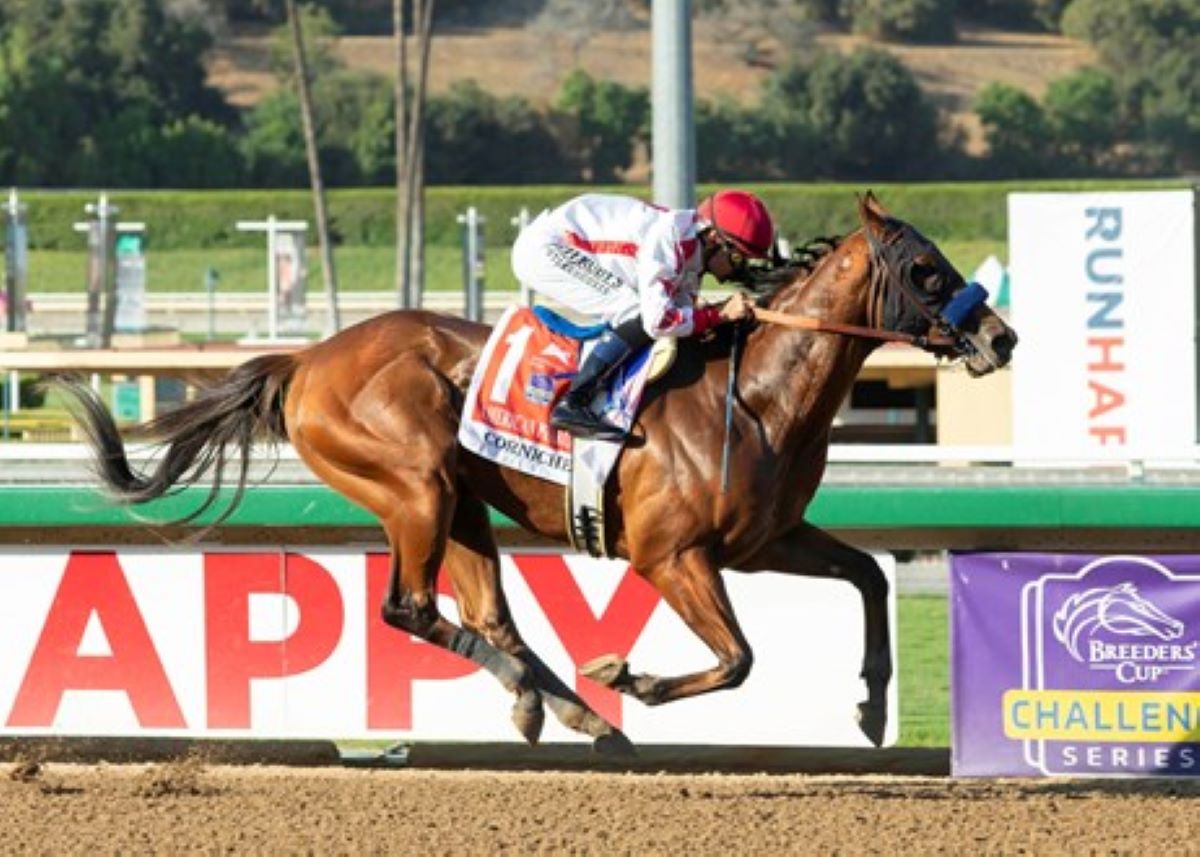 This was an easy selection for Eclipse voters who weren’t stuck on the fact Corniche was a Bob Baffert charge at that time. Several voters went on the record saying they wouldn’t vote for any Baffert horses in the wake of the Medina Spirit/Kentucky Derby betamethasone case.

Two of Corniche’s three victories came in Grade 1s: the aforementioned Juvenile and the American Pharoah a month earlier at Santa Anita Park.

This, of course, put Corniche on the radar of Derby future wager watchers. Corniche topped the first Derby future odds of 2022. He was listed at +1,350 at Circa and +600 at Caesars/William Hill. But he went on the shelf after his connections didn’t like his January workouts. He went to WinStar Farm in Kentucky, where he spent the winter and spring finding his form. Owners KC Weiner and Peter Fluor did not want to push their $1.5 million colt into a Triple Crown run he wasn’t ready to tackle.

Corniche went back to work in April, putting in two works at WinStar. Meantime — citing Baffert’s 90-day suspension — Weiner and Fluor transferred Corniche to Pletcher’s barn. He joined the New York-based trainer at Belmont Park, where he hit the track again in mid-June. Corniche’s July 9 workout was a 1:02.29 bullet that was best of nine that day.

The Amsterdam is going to be unfamiliar to Corniche in more ways than one. He’s obviously never run at Saratoga and the 6 1/2 furlongs is not a typical distance you send a router. But Pletcher didn’t get the “Hall of Fame” prefix next to his name without seeing the entire chessboard. He knows where the deep end of the pool begins for a horse who hasn’t run in nearly nine months.

Plus, given Corniche’s record, most allowances are out. They’re typically restricted to winners of two or fewer races or non-stakes winners.

“There are no soft spots to land with a horse like him that’s already won three races, so we’re hoping we have him ready enough for a good showing in here,” Pletcher told the New York Racing Association. “We didn’t want to run him in a race like the Jim Dandy or the Curlin off a lengthy layoff going nine furlongs.”

There is a history here

Which brings us back to the father/son tale here. Pletcher won the Amsterdam four times. His first victory came with Quality Road in 2009. Not only is Quality Road Corniche’s sire, but the Amsterdam was his first start for Pletcher. The colt moved to Pletcher’s barn from Jimmy Jerkens’.

“We’re hoping that with the good fortune we had with his sire, Quality Road, and him making his debut for us in the Amsterdam — which produced a track-record performance — that hopefully some of that good fortune will follow through here,” Pletcher said.