There are actually five horses in Saturday’s featured Grade 1 CCA Oaks at Saratoga. But do not let yourself get bogged down by numbers. 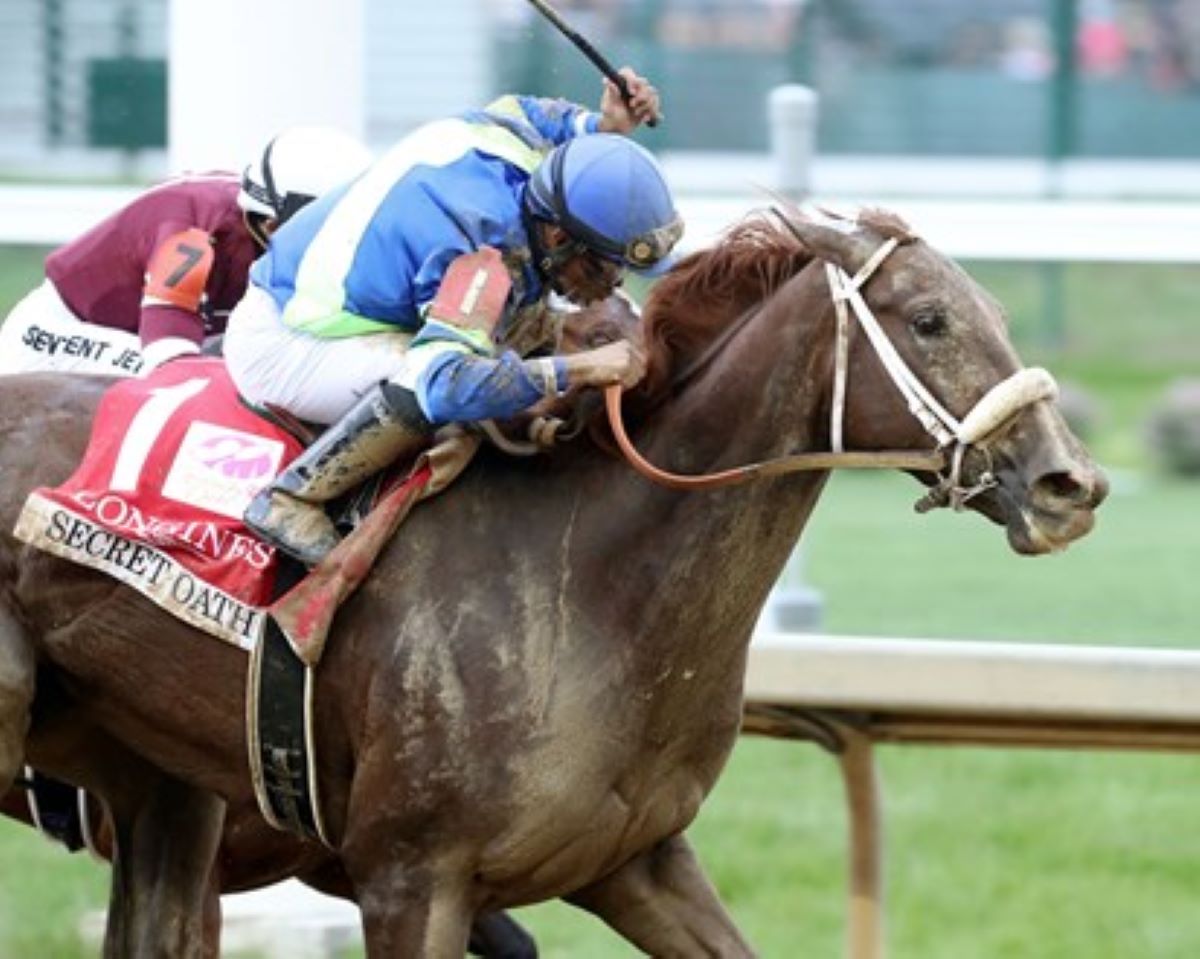 Secret Oath turned in a dominant performance in the Grade 1 Kentucky Oaks May 6. She has never lost to another filly, a streak she puts on the line in Saturday’s Grade 1 CCA Oaks at Saratoga. (Image: Coady Photography)

As in Secret Oath vs. Nest. The Kentucky Oaks winner vs. her game runner-up. These two are more than first-among-equals in the nine-furlong CCA Oaks. They’re the two best 3-year-old fillies in a deep sophomore class.

Not to mention the two fillies who ran against the boys in the last two jewels of the Triple Crown. But we’re getting ahead of ourselves here.

They went 1-2 in the Kentucky Oaks

When these two tangled in the Kentucky Oaks, Secret Oath found herself in eighth on the backstretch. But Luis Saez had matters in control. He wheeled Secret Oath four-wide approaching the far turn, seized the lead out of the turn and held off late-running Nest for a two-length victory.

Now, Secret Oath, who is 3-for-5 and unbeaten against her own sex, attempts to become the first filly to sweep the Kentucky Oaks-CCA Oaks double since Ashado in 2004. She would be the 15th filly pulling that off.

Hall of Fame trainer D. Wayne Lukas already pulled that off with Hall of Famer Open Mind in 1989. He was ecstatic about his fifth Kentucky Oaks win and first since Seaside Attraction in 1990.

“Everything about it was perfect and we’re looking for that same trip again,” Lukas told the New York Racing Association. “She’s training so forwardly, Luis knows her and it’ll be a smaller field. I think the trip shouldn’t be a factor.”

When Lukas sent the daughter of Arrogate out in the Preakness Stakes, 15 days after her Oaks victory, the trip was a factor. Secret Oath was forced to check coming out of the gate and endured a difficult and wide trip. She rallied from ninth and last on the backstretch, but finished fourth: 6 1/4 lengths behind winner Early Voting.

“The trip never came up. A filly like that running against the colts, you need a good trip,” Lukas said. “You can’t get into all that trouble and be that far back and still overcome it. She needed a trip like she got in the Kentucky Oaks. I really believed she was the best horse, but you can’t mail it in. You have to prove it.”

That’s what Nest nearly did in the Belmont Stakes. She finished three lengths behind stablemate and winner Mo Donegal. Not only did that keep Nest perfect hitting the board (4-2-1), but it continued her consistent form. She’s never been beaten by more than three lengths in any race.

“You always want to just hope they come out of a race like that in good order,” trainer Todd Pletcher said. “She was so well-designed for the mile and a half that the race really didn’t take much out of her. Pretty much everything that she’s done since the Belmont has told us that she’s ready to run back now as opposed to running another month.”

Pletcher thought about running Nest in the 1 1/4-mile Alabama next month. Instead, he’ll try duplicating Banshee Breeze’s CCA Oaks-winning performance from 1998. That year, Banshee Breeze finished second to Keeper Hill in the Kentucky Oaks, but flipped the script in the CCA Oaks.

The only other time the Oaks exacta met in the CCA Oaks came five years ago. Oaks winner Abel Tasman nipped Elate by a head, with Oaks runner-up Daddy’s Lil Darling far back in fifth.

Another detail worth pondering. This race will write a plot-filling chapter in who wins the Eclipse Award as Champion 3-Year-Old Filly. Three of the last six CCA Oaks winners later celebrated with an Eclipse Award: Songbird (2016), Abel Tasman (2017) and Monomoy Girl (2018).

The CCA Oaks is Saratoga’s fifth of 11 races Saturday.