No matter what else happens in a poker game, your poker strategy always comes down to one key moment – whether you pay to see the flop or you fold. If you’re interested in learning more about how to play Texas Hold’em poker, you have to start by looking at what you’re dealt. Learning a little bit about what the Best Starting Hands in Poker really mean, will give you the information you need to win poker tournaments and become an all-around better poker player.

Texas Hold’em starts you with two cards. If you do a little tinkering with the math – assuming that any unsuited pair is roughly equivalent to any other unsuited pair, for example – you’ll quickly figure out that you have about one-hundred-sixty-nine different possibilities when it comes to those first two cards.

Once you realize the sheer possibilities in terms of the deal, you can break things down a little farther. The easiest possibility to visualize is a pair – two 2s, for example, or two Kings. From there, you’re looking at connectors – cards that are next to one another in an order on which you can build a straight. These cards can be either suited or unsuited. If you don’t have connectors or pairs, you’ve got either suited or unsuited unconnected cards.

It’s fairly easy to see the value of connectors, but unconnected cards can tell you a lot about what might come next. The size of the gap tells you the odds of getting a straight when the cards come out, with a bigger gap reducing your odds. That’s why you’re generally better off looking at a five and a seven, for example, than if you’re dealt a two and a seven.

The Best Starting Hands In Poker You can be Dealt 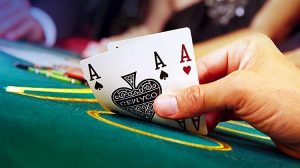 In the world of poker, players acknowledge that some starting hands in poker are just better than others. This has a lot to do with what can be built off of the cards, and there’s always some disagreement on these matters between pros. These premium hands, however, tend to fall into just a few main groups.

The one of the starting hands in poker that most players won’t argue against are pocket aces and pocket kings. In regular parlance, that means being dealt either two aces or two kings. These are very good cards to start with, and they can actually win a game if the flop is unfriendly and other players are unlucky. You’re not going to see them often, though, so you need to cherish them when they do show up.

It’s also important to remember that this is a good starting hand, but it’s not exactly invincible. You can absolutely lose with these cards in the pocket, especially when you’re the player sitting with the Kings. This starting hand is less used as a guaranteed winner than as a way of narrowing down the field of players. The more people you can push out with this starting hand, the stronger it will become.

The second group is just a step down from the Aces and Kings. As you might imagine, you’re going to be looking for the Queens and Jacks in your pocket next. The good news is that Queens and Jacks win against pretty much everything on the table. The bad news, of course, is that they’re going to lose against that better premium starting hand. Having Queens and Jacks is not quite as strong as Ace/King, but it’s fairly close.

Given that there’s a lot of arguments about the premium starting hands in poker, it’s a good idea to acknowledge the slightly less popular runner up in this spot, the Ace-King combination. Called the Big Slick, the combo has some of the best potential on the table. If suited, you are literally set up for everything from a pair to a royal flush. It’s not an instant win, though, and it can be taken out by any pair, but when one of the other big face cards hits the table it can become incredibly effective.

The third group of winners builds off of the sets above. Pairs of face cards, Ace/Face combinations, and King/Queen combinations are all very hard to beat. They’re strong enough to carry you before the flop and maybe even to the river, giving you just enough strength to bully out players who don’t have anything quite yet. These combinations really only hit third place, though, because the combinations above them have a much better chance of producing winners as the game goes longer.

It’s a good idea to stop and think about how common poker strategy interacts with starting hands in poker. New players and foolish players have their own quagmires in which they get stuck, and understanding them is important if you don’t want to wind up in the same position.

The Problem with Suits 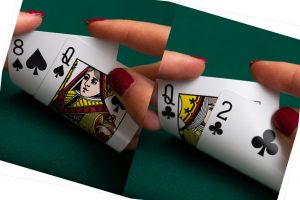 If you want to see money fly away at a table, just watch for a new player who keeps betting when his or her cards are suited. Yes, suited cards can be amazing – and it’s not a bad idea to use them, especially if you really want to see that flop. The problem, though, is that the odds are wildly against getting a flush on the flop, so you’re going to have to keep pushing towards the river in order to get anything – and the odds really aren’t that great there, either. Simply put, the player who only has a pair of suited cards is usually a player who has nothing.

The other big money-loser at most tables is paying way too much attention to the big card and ignoring the kicker. If you look above, you’ll see that having an Ace in your hand is incredibly valuable. That only works, though, if it is paired with a strong card. If you’re sitting with an A/6 hand, for example, your best case scenario has probably ruled out both a straight and a flush, and you’re going to be taken out by anyone else who pairs off that Ace with a higher kicker.

If you’re going to play a hand off of the strength of your highest card, you need to be fairly sure that the kicker is going to be strong enough not to cost you when all the cards are shown.

Making the Most of Your Hand

We’ve largely been talking about starting hands in poker as if they exist in a vacuum, but the truth is that the game itself is going to play a huge role in how your hand actually shakes out. If you really want to leverage your starting hand into something special, you have to talk about the condition of the table at which you are playing.

Poker is complicated and there are plenty of variables in play. Below are just a handful of questions you’ll need to ask to judge the efficacy of your starting hand.

How Many People are Playing?

Starting hand strength always varies due to the number of players at the table. Yes, going with the highest premium hand is probably safe even at a full poker tournament, but there are a handful of weaker hands that can really dominate as the number goes down. The fewer players, the lower the odds that you’re going to see any particular combination that will beat your own. This is when a combination like KQ really shines, as it has better statistical odds of coming out on top.

How are Your Positioned?

Where you sit actually matters in poker. As a rule, the player who is the latest in the betting order is always in the best poker position because he’s the person who has the most information on which to make his decision. The earlier on you are in the order, the more you’re going to have to rely on knowing things like the base level of strength of your starting hand.

Your position on the poker table will be a major factor in deciding which starting hands you should play. Unfortunately, figuring out exactly what to play due to the position is something that takes time to learn, and even then you’re going to have to play things by ear.

The way the pot looks always plays a role in what you need to do next. If you see reasonable players building up the pot, you might want to stop and think about whether your starting hand is anywhere near as strong as you’ve assumed. If there’s not much going on, you might want to think about where you stand as well. Your goal is to look at the behavior of the other players and determine how best to exploit their actions when it’s your turn to bet.

Yes, there are plenty of charts for new poker players. While it’s not necessarily a bad thing to take a look at these starting hand charts when you first start out, it’s important not to treat them like they’re the rule of law. These are just the basics, and relying on them too heavily is going to put you in a bad position.

The truth is that charts only tell you about theoretical positions. They won’t tell you anything about the other players at the game, what your pile of chips looks like, or (perhaps most importantly) what you can get away with against particular players. These charts are just like any other resource, in that they’re a great guide for telling you something new, but they’ll be a hindrance if you rely on them too much.

There is an important lesson to be gained by using a chart, though. You’ll know the common wisdom, so you’ll realize that you’re going off the beaten path when you try to do something else. If you’re going to deviate, you need to know exactly why it’s safe to do so and whether it’s really a profitable choice.

Pay attention to your starting poker hand. You might be very excited to play and you might think that you’ve got a good shot just because you have part of something, but the truth is that you’ve probably got nothing but a waste of money in your hands. Good players throw out more than they keep, and this is always going to be your best way to keep your money safe.

Even with that said, your experience will also teach you that some starting hands in poker are more valuable than others think. Until you can make that decision for yourself, though, you need to be smart enough to stay cautious. You’re going to play slow and steady, but you’ll often find that this brings you to the end of the tournament.

Your starting hand is just that – a start. Use it as the foundation for how you play, and then apply your other skills. With the right knowledge of poker rules and how the game is played, you can win more poker games and turn those two cards into real money. See you at the WSOP!

What are good starting hands in poker?

As a beginner, I would recommend sticking with high cards, pairs, suited-connectors, suited one-gappers and Ax-suited, but use your judgement. For example, don’t overplay suited-connectors and always play from a positional advantage.

What percentage of hands should I win in poker?

It depends on the day, but when going to showdown, you should win most of them. If you’re not winning the majority of hands at showdown, you need to reevaluate your game.

What hands win the most in poker?

It depends. If there is little betting, top pair or even ace-high. If there is a lot of interest in the hand, it’s usually two pair or better.

What is a bad hand in poker?