Cash Games vs. Tournaments. If you want a shot at the big money—the kind of money that is life-changing—then you need to play in poker tournaments. Some poker players fear playing in poker tournaments because they find it difficult to come in the money. While that might be true, there is one way you can greatly increase your odds of cashing, and that unbelievable poker hand strategy can be described in one word: Folding.

Therefore, it won’t be easy to grind out a living and you might eventually go broke. We don’t want that. The other problem with cash games is that it usually means no traveling. When you play in the same place all the time, you’re much more likely to burn out. 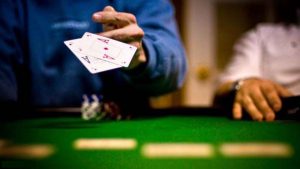 My biggest cash to date is $20,843, which was the Re-Entry in Cherokee, North Carolina. I finished 7th of 2,373 entries. I’ll tell you a few reasons why that happened.

On one poker hand midway through the tournament, I raised 3x the BB with QQ and was raised by a player that hadn’t raised yet throughout the entire day. Red flags went up in my mind immediately. I considering folding but decided to call to see a flop. Three unders hit the board, which would seem like a great flop for QQ.

Since I was concerned, you might think I would check here, but if I check, he bets regardless of his cards and I don’t know where I stand. I bet a standard amount to see how he would react. He raised three times my bet. I folded.

Fortunately, this was five minutes before the break. I caught up to him in the hallway and asked what he had. He said, “Why? What did you have?” I was honest and told him I had queens. He said, “You folded queens?!” I said yes and he told me he had me beat, then walked away. I could tell by his demeanor that he was telling the truth. I should have been out of the tournament at that point, but by folding, I remained alive. 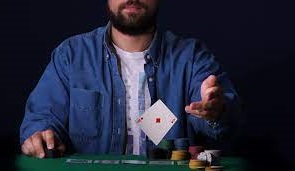 A few hours later, after being moved to a different table, I was dealt TT on the button when everyone had folded to me. I raised 3.5x the BB. The SB folded and the BB called. The flop was once again three unders, which would seem like a dream flop for TT when heads-up. The SB checked the flop. I bet. He then raised all-in.

This very likely meant he hit two pair. If it was a set, he would have checked to disguise his hand. If it was top pair, he would have bet out to get rid of me. An all-in on the flop from the BB is almost always two pair. I folded, which seems insane, but I had to trust my read and what the story told me.

I later overheard him talking to his friend and mentioning that he had two pair on that hand. Once again, I should have been out of the tournament, but I remained in the game for one simple reason: Folding.

I have a friend that follows one of my popular poker rules for tournaments. He stuck to this poker strategy for one full year and only played in small tournaments and low-stakes cash games. He netted $80,000 for the year. What he said to me one time by following this strategy spoke volumes. He said he didn’t play Texas Hold’em Poker; he played Texas Fold’em Poker.

The third and most important poker hand in this tournament was when we were approaching the money. This was yet again at a different table after I had been moved. As players are eliminated, there are break tables so the playing field can be evened out by using fewer tables. I happened to be at break tables all day in this poker tournament.

Before I tell you what happened here, I want you to know that unlike most poker players, I love AK. So many players make the old joke that it’s just like Anna Kournikova—looks great but never wins. The truth is that AK wins often. How many times do you see QQ vs. AK, the Ace hits and the player with QQ says, “It always comes.” AK is a powerful hand. You’re ahead of all other aces and you still have a shot against pretty much every pair except AA.

I wanted to express the power of AK prior to telling you what happened. I raised with AK UTG. A player in middle position re-raised. The player on the button then went all-in, which would have put me all-in. I debated for a minute.

A few things here. One, I was UTG, which is the weakest possible position. Despite that being the case, I raised, which immediately demonstrates strength. The player in middle position raised me anyway, which meant he had no fear. The player on the button knew I raised from UTG and then watched another player raise me yet he still went all-in.

Anyone playing at this point of a massive field knows what they’re doing, and they knew they were approaching the money. Would these two players both risk their tournament lives with weak hole cards after seeing how things had played out pre-flop? No chance. At least that’s the way I read it.

Therefore, despite AK being an exceptional poker hand, I folded. The other two players ended up all-in heads-up. The player in middle position had 44 and the player on the button had AQ. I wasn’t in as bad of shape as I thought, but I still wouldn’t have been in great shape. No ace or queen came (or king in relation to my folded hand) and the 44 held. If I had called with AK, I would have been out of the tournament.

The chip leader at this table was Irene, an excellent Circuit player. She had 6 million chips. In second place was someone we’ll refer to as Buddha because he always kept a Buddha figure on top of his stack. He had 5 million chips. The person third in chips had less than 1 million chips. This shows you far ahead these two players were of everyone else.

On one very important hand, Irene raised 4x the BB from UTG +1. This is a standard raise for this part of the tournament. You don’t want to risk too many BB on one hand because you worked for those chips all day and there was a lot of money on the line—1st Place was paying more than $150,000. Everyone folded to Buddha on the button. To everyone’s shock (and delight), he went all-in for 5 million chips when the BB was only 10,000.

Irene was more shocked then anyone, but after hesitating for a split second, she called with KK. Buddha tabled 99. Irene walked away from the table because she couldn’t look. KK held, Buddha lost all 5 million chips in one hand, and everyone at the table moved up $10,000 on the pay ladder simply because of that one poker hand.

Can you guess what my point is going to be? Buddha was sitting with 5 million chips and Irene had put in a strong raise from UTG +1. While 99 is a good poker hand, it’s nowhere close to worthy of an all-in there. A call would have even been questionable yet somewhat justifiable because he can see if he flops a set and then fold if that’s not the case. The problem with a call with 99 against the chip leader is if the board is three unders, Buddha isn’t folding and gets into big trouble anyway.

If Buddha was heads-up with someone who had less than 1 million chips, then there are all kinds of ways to play it, but 99 and up against the chip leader who raised from UTG +1, there is only one way to play this poker hand: Fold! If Buddha folds that hand and simply sits back and watches the fireworks with other players attacking one another, he consistently moves up the pay ladder without having to do anything. In other words, folding makes him money!

Do you realize what I just wrote? Sometimes you have to fold good hands in poker tournaments if you want to outlast your opponents. Very few poker players understand this. That’s because they look at tournament poker backwards. I’ll reword it a little, but please understand this point. In a poker tournament, folding makes you money!

You might be thinking it’s impossible to accumulate chips if you keep folding, but there will be moments throughout a poker tournament when you know you have the winner. That’s where you make the majority of chips. There will also be poker hands where you’re not playing the hand but your position and the players behind you. By putting in small raises that are bluffs, you can accumulate chips.

Notice I wrote ‘small bluffs.’ Players who put it in big bluffs in poker tournaments eventually go broke. We don’t want that. The key to everything in tournament poker is simple: Stay in the game. And the best way to stay in the game sometimes is by folding good hands! See you at the WSOP!

What is a good poker hand?

A good poker hand is any hand where your hand ranks higher than your opponents’ hand. For example, if you have the nut flush while one opponent has a smaller flush and another player has a straight, that’s a good poker hand.

Is JQKA2 in poker a straight?

No. JQKA2 is not a straight in Texas Hold’em poker. You can’t wrap straights around the ace in this game.

What are the best hands in Texas Hold’em?

The best pre-flop hands in Texas Hold’em are AA and KK. The best post-flop hands are a Royal Flush, a straight flush and four of a kind, but those are rare.

What is the worst hand in poker?

The worst starting hand in poker is 72-off, but that’s an easy fold so it’s not a dangerous hand. Dangerous hands include KQ and AT. They look strong, but if you get involved in a big pot, you’re usually behind.