The Asian Poker Tour (APT) concluded its fourth international festival of the year with thirteen days of games running from July 12 to 24 at the Viet Nam Series of Poker (VSOP) in Hanoi, Vietnam. This was the brand’s first series at the venue and it was an ambitious one. A total of 29 tournaments lined the schedule which was the most ever staged by the APT in history. At the close, it was well worth the risk as it smashed all guarantees and paid out a grand prize pool of over VN₫ 43.8 Billion (~US$ 1.867M). This was the second largest APT pot ever produced.

Here are the highlights.

*All photos by the APT

Milestone achievement for Filipino young gun Vamerdino Magsakay who captured the Main Event for his first major career win. Magsakay had been on the hunt for the title ever since he placed 3rd at APT Philippines 2019. He outlasted the 487 entry field, coming from behind at the Final 8 and at heads up. Magsakay banked a career high score of VN₫ 1,986,320,000 (~US$ 84,960) and became the first player from the Philippines to win it outside of home turf.

In addition to this victory, Magsakay cashed at two side events to accrue the highest number of points in the APT Player of the Series race. This was the second time Magsakay has clinched the distinguished title, joining Filipino pro Mike Takayama and Japanese pro Iori Yogo in the exclusive group of two-time POS winners.

The VN₫ 22M buy in Main Event ran from July 14 to 19 pulling in 487 entries for guarantee smashing prize pool of VN₫ 9,447,800,000 (~US$ 402,800). For most of the stages, Vietnamese high roller Dao Minh Phu, dominated the charts with an enormous stack carried into Day 2, Day 3, and the Final 8. At five handed, he lost the lead to eventual runner up Nguyen Quang Huy with a straight crushed by a full house. Phu went on to exit in 4th place and was followed by India’s Ankit Kumar Jajodia in 3rd place.

Nguyen opened heads up with a 5:1 advantage and with blinds still low, Magsakay grinded and slid into the top spot for the first time. As the pair tugged, Magsakay plunged on a lucky two-outer spiked by Nguyen on the river to beat trips. With the counts flipped it was back to the grind for Magsakay. It took another two hours to secure the win. Magsakay surged on a failed bluff by Nguyen then closed it out with

The Championships Event was the second featured tournament of the series with buy in at a higher VN₫ 38,500,000 (~US$ 1,640). With registration running through the first three levels of the Day 2 stage, it closed at a total of 288 entries. This was a new APT Vietnam Championships Event record turnout, besting the previous high of 209 entries.  The prize pool was also one to boast of as it grew to more than double the proposed guarantee. Emerging victorious was New Zealand’s Slade Fisher for a career high payout of VN₫ 2,298,440,000. This was the largest first prize payout awarded at the series. Fisher became the first player from his country to win this event. 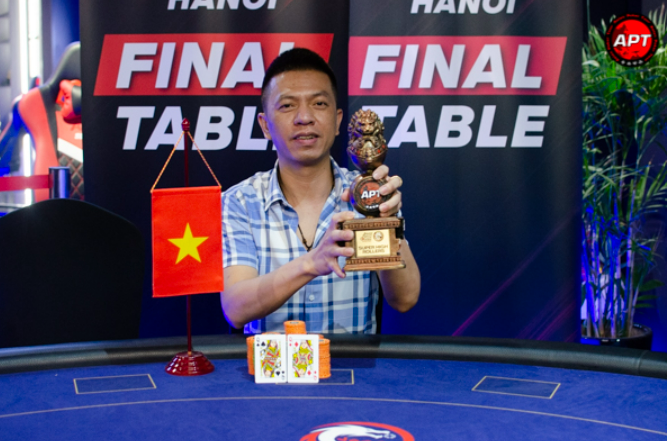 Vietnamese high roller Nguyen Quang Huy consistently runs deep at APT Vietnam events and it was no different at this series. He nearly shipped the Main Event, falling one spot short to pocket VN₫ 1,324,230,000 for runner up. At the final day of the series, Nguyen closed out the Super High Rollers event to pad up another hefty payout of VN₫ 1,249,700,000. These two massive scores awarded Nguyen a combined VN₫ 2,573,930,000 (~US$ 110,090) making him the series’ biggest earner.

Stealing the most headlines at the series was Vietnamese high roller Dao Minh Phu who captured his first ever APT victory at the Superstar Challenge event. This was the most expensive tournament offered with buy in at VN₫ 108,000,000 (~US$ 4,620). Phu topped the 27 entry field for a payout of VN₫ 1,118,890,000 (~US$ 47,860). Following that event, Phu entered Main Event Day 1B and bagged up the fifth largest stack. While most everyone would be content with a stack over 160 BB for the next heat, Phu entered Day 1C attempting for better. Not only did he stun the crowd by entering, he bagged up a monstrous 450+ BB stack to enter Day 2 as the overwhelming chip leader. Phu carried the momentum through the next two stages and entered the Final 8 still as chip leader. He eventually finished in 4th place. 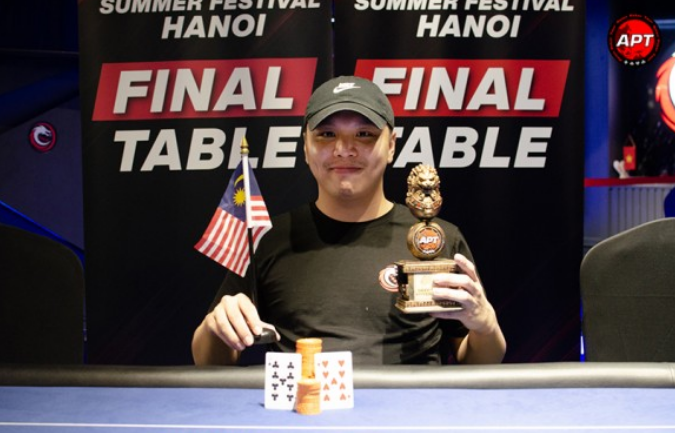 Newcomer to the APT, Malaysia’s Chang Xiang Guang walked away delivering one of the best performances. Guang cashed in 7 events, the most by any player, to win 2nd place in the Player of the Series race. He nearly made it eight but fell on the bubble at the No Limit Hold’em Single Day on a full house over full house. All of Guang’s cashes were at the side events, reaching six final tables with a victory at the Deep Stack Hyper Turbo.