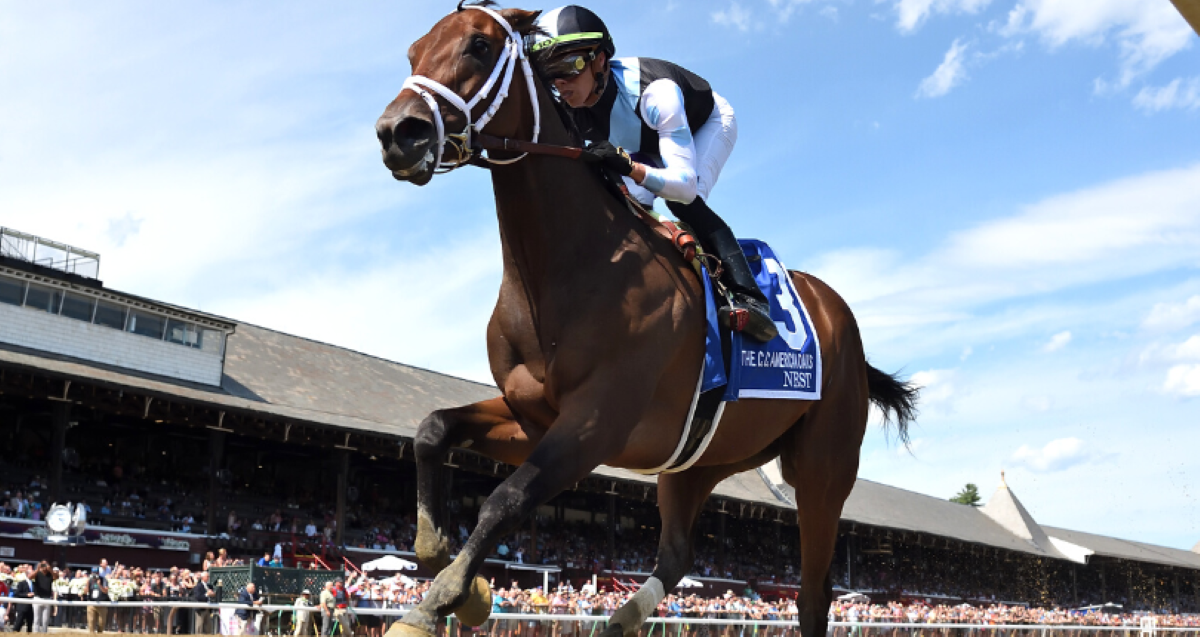 Nest finished all alone in Saturday’s Grade 1 CCA Oaks — 12 1/4 lengths ahead of her closest pursuer. The standout filly and Belmont Stakes runner-up could run against the boys again in the Grade 1 Travers Stakes. (Image: NYRA Photo)

Now, after Nest bludgeoned her rivals by 12 ¼ lengths in the CCA Oaks, could there be another bout with the boys?

Trainer Todd Pletcher did not rule it out Sunday. He left the door open for Nest to run next in Saratoga’s flagship event: the Aug. 27 Grade 1 $1.25 million Travers Stakes. That would put the Belmont Stakes runner-up against likely foes such as Kentucky Derby winner Rich Strike, Derby and Preakness runner-up Epicenter, Derby third-place runner Zandon, improving stablemate Charge It and Haskell winner Cyberknife.

The 1 ¼ miles is well within Nest’s stamina wheelhouse. She ran 1 ½ in the Belmont without breaking too much of a sweat. Pletcher has repeatedly said the longer Nest goes, the better she likes it. The career-best 104 Beyer Speed Figure she clocked in the CCA Oaks was two points better than Cyberknife’s Beyer, which was earned running on a faster Monmouth Park track.

Do other fillies really want a piece of her now?

This sounds like a no-brainer for Pletcher and owners Repole Stables, Eclipse Thoroughbred Partners and Michael House. After all, the alternative is running Nest in the 1 ¼-mile Alabama Stakes the week before against a likely weaker field than the one she dismantled Saturday. The Alabama is the week before the Travers.

Any would-be Alabama challenger looking at what Nest did in the CCA Oaks would naturally entertain second thoughts. She took the lead at the half-mile pole from Society and that was that. By the stretch, Nest enjoyed a 4 ½ length lead over Secret Oath. At the furlong pole, jockey Irad Ortiz Jr. took a look back, saw Secret Oath receding with every stride, and put Nest in cruise control. He wrapped her up at the sixteenth pole.

“She came out of it excellent – very good.” Pletcher said. “It was very impressive. She had kind of been touting herself that she was coming into the race in great shape and I’m delighted to see her run to the race she was training (for).”

That evened the ledger between Secret Oath, who won the Kentucky Oaks by passing Nest in the stretch, and Nest. Hall of Fame trainer D. Wayne Lukas said Sunday Secret Oath will be at the Alabama. He doesn’t scare easy.

Pletcher hedged slightly. The Travers is still on the table. But those would-be Alabama connections can start entertaining those second thoughts.

“We’re leaning toward (the Alabama). I had a brief conversation (with her owners) though and we did not completely rule out the Travers” Pletcher told the New York Racing Association. “She showed she can hold her own against (males) and we know the mile and a quarter suits her. So, we’ll keep it in the back of our mind. I’d say all things being equal, we’ll probably see her in the Alabama.”