The Denver Nuggets are the current betting favorite to win the 2023 NBA Northwest Division at -150 odds, but the Minnesota Timberwolves are not far behind at +165 odds after they added three-time Defensive Player of the Year Rudy Gobert in a trade. 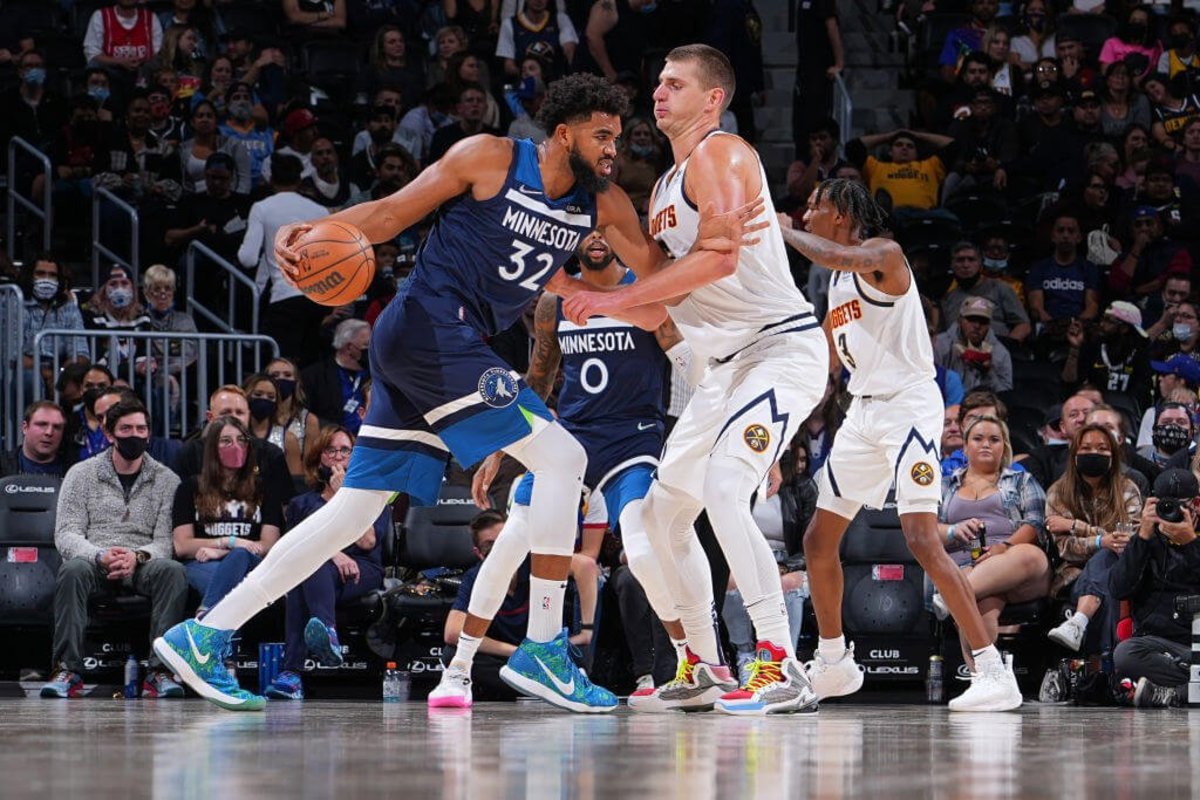 Karl-Anthony Towns from the Minnesota Timberwolves makes a move against Nikola Jokic from the Denver Nuggets. (Image: Getty)

Since the creation of the Northwest Division at the start of the 2004-05 season, the Minnesota Timberwolves have never won a divisional title. Since joining the NBA as an expansion team in 1989-90, the Timberwolves won their division just once in the final year of the former Midwest Division back in 2003-04.

The Utah Jazz won the Northwest Division the last two seasons, but they’re a long shot at +2200 odds to pull off three consecutive division titles. The Jazz are in the middle of rebuilding their team while shopping All-Star Donovan Mitchell in a trade. Almost every veteran is on the trade bloc, including Mike Conley and Patrick Beverly, while the Jazz begin a difficult transition.

Nikola Jokic won the NBA MVP in back-to-back seasons, but he had a heck of a performance last season with the Denver Nuggets missing two key starters. Jamal Murray did not play a single game last season while recovering from an ACL knee injury. Michael Porter Jr. appeared in just nine games before he underwent season-ending back surgery. Both starters are expected to return to the starting five this season with a 100% recovery.

In the meantime, the Nuggets improved their defense by adding Kentavious Caldwell-Pope in a trade with the Washington Wizards. They also have Bones Hyland coming off the bench to anchor the second unit. The rookie thrived last season with Murray out.

The Timberwolves made the most of a trip to the Western Conference Play-In Tournament and they secured the #7 seed in the playoffs. They were knocked out in the first round by the Memphis Grizzlies in six games during the most exciting series in the entire 2022 NBA Playoffs. Fans caught a glimpse of two up-and-coming franchises that expect to battle for the Western Conference crown for the remainder of this decade. The Grizzlies are already there, but the Timberwolves make a giant leap from being one of the worst teams in the Western Conference to a legit playoff contender. The Timberwolves were one of the four worst teams in the conference 13 times in the previous 17 season, but it’s the dawn of a new era under head coach Chris Finch.

Karl-Anthony Towns has always been a valuable fantasy basketball player, but he’s finally translated strong stats into victories. Anthony Edwards turned heads with a stunning performance in the basketball movie “Hustle”, but the former #1 pick has been stellar the last two seasons as the anchor of their high-octane offense.

Defense was the big problem with the Timberwolves, and new general manager Tim Connelly quickly addressed their biggest issue. The Timberwolves acquired Gobert from the Utah Jazz, but they paid a costly price by giving up four first-round draft picks plus five players including two starters and a first-round draft pick from the 2022 NBA Draft. Pundits think the Timberwolves overpaid for Gobert, who has a history of not getting along with his teammates. Gobert will vastly improve their defense, but we’ll see how much losing other roles players in the trade will come back to haunt them.

The Timberwolves are +165 odds to finally win their first Northwest Division crown.

The Portland Trail Blazers are another team that finds themselves in a transition phase. They gutted the team and retained superstars Damian Lillard with a mission to rebuild the team and try to win a title as Lillard begins the back nine of his career. However, they have not exactly added the right combination of players to make a legit run at a title, let alone a division crown. The Blazers are +650 odds to win Northwest, and they last won a division title back in 2018.

Quin Snyder stepped down as head coach, which came to a surprise from everyone considering his success in recent years. Its obvious now that Snyder bailed because he did not want to be a part of a complete rebuild from scratch. Team president Danny Ainge has been wheeling and dealing since the offseason began and he could come away with at least ten first round draft picks in various trades while gutting the team. He already dealt Gobert and Royce O’Neal. Meanwhile, the Jazz are shopping Donovan Mitchell, Mike Conley, Jordan Clarkson, Patrick Beverly, and Bojan Bogdanovic.

Incoming rookie head coach Will Hardy becomes the youngest coach in the NBA, but he’ll have an uphill battle ahead of him trying to coach a team of young players and other veteran min-contract castoffs. The Jazz are +2200 odds to win the Northwest, but instead of seeking a three-peat there’s a better chance they finish dead last in the division.

Keep an eye on the Oklahoma City Thunder if the franchise decides to actually win games and not tank for a shot at incoming #1 pick Victor Wembanyama from France. If the Thunder let their young players actually play, they could become the surprise team in the NBA next season. Chet Holmgren — the #2 pick in the 2022 NBA Draft — looked good on both ends of the court during the NBA 2K23 Summer League. Josh Giddey from Australia showed flashes of brilliance last season and set a record for youngest player in NBA history to record a triple-double and back-to-back triple-doubles. Giddey played so well that the Thunder shut him down in the final month of the season because they were worried they’d win too many games and fall out of contention for a lottery pick.

The Thunder are definitely a long shot to win the Northwest Division at +30000 odds due to inexperience players and a potential operational mandate to “tank” this season, but they’ll be fun to watch.